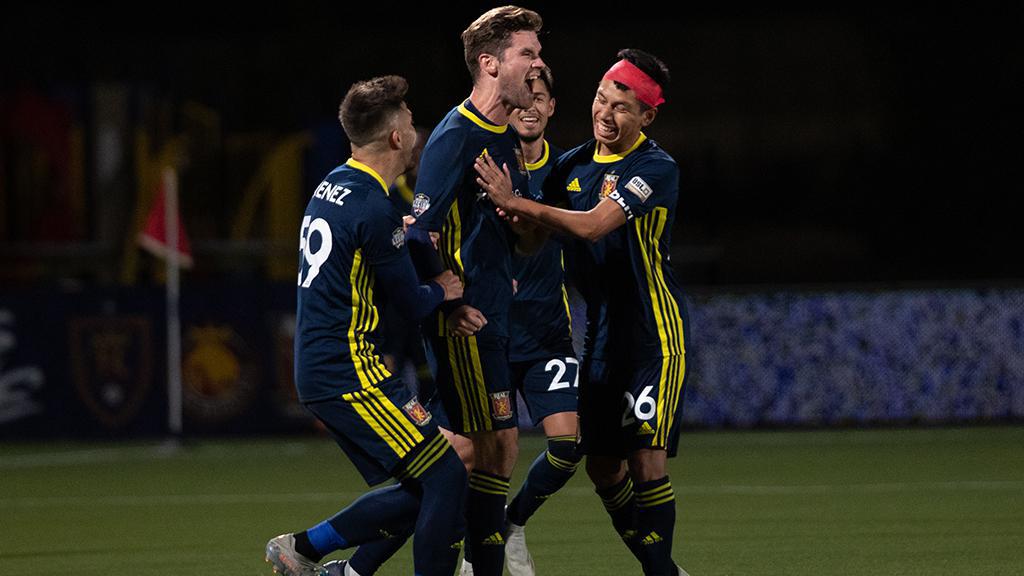 HERRIMAN, Utah – Real Monarchs SLC maintained its outside chance at a return to the postseason with a 4-1 victory against Colorado Springs Switchbacks FC on Wednesday night at Zions Bank Stadium.

The Switchbacks were handed the early lead as Monarchs goalkeeper David Ochoa showed some rust from his time away from action in the eighth minute. Ochoa misjudged a long ball forward by Colorado Springs’ Adrian Diz Pe as it reared up off the surface and went over his head, allowing Aidan Daniels to claim possession and finish into the open net.

The visitors’ lead would only last 10 minutes, though, as Julian Vazquez produced a fine finish for the Monarchs. Dayonn Harris delivered a good ball in behind the Colorado Springs backline from midway inside the attacking half on the right that found Vazquez, and while he was challenged by both a defender and Switchbacks goalkeeper Sean Melvin, the 19-year-old bought enough space with a quick drive to his left to angle home a finish into the open net with Melvin having come off his line to challenge previously.

The Monarchs then took the lead in the 26th minute when Noah Powder delivered a corner kick from the right that picked out Sam Brown at the near post, and Brown’s snap-down header found the back of the net to put Real ahead. Real held its lead to halftime, and then added to it midway through the second half as Luis Arriaga found Jack Blake with a pass from the left at the top of the penalty area, and the Monarchs’ captain slid one more pass on to Bode Davis in the right side of the penalty area for a low finish that marked his first professional goal.

Real continued to look like the team that last fall had claimed the USL Championship Final in the 76th minute as it was awarded a free kick to the left of center about 25 yards from goal. Powder stepped up and delivered a low, curling shot around the defensive wall that snuck just inside the left post to mark the club’s highest attacking output of the season.

Both sides had chances to find the net late as Colorado Springs’ Christian Volesky was shut down by Ochoa after a loose back-pass by Powder, and the Monarchs’ Andrew Brody almost added a fifth. The hosts were never in serious danger of letting their lead slip, however, as they recorded back-to-back victories for the first time this season

Noah Powder, Real Monarchs SLC – Powder recorded a spectacular goal and an assist and finished the night with two key passes and completing 30 of 35 passes overall while also winning 6 of 8 duels.