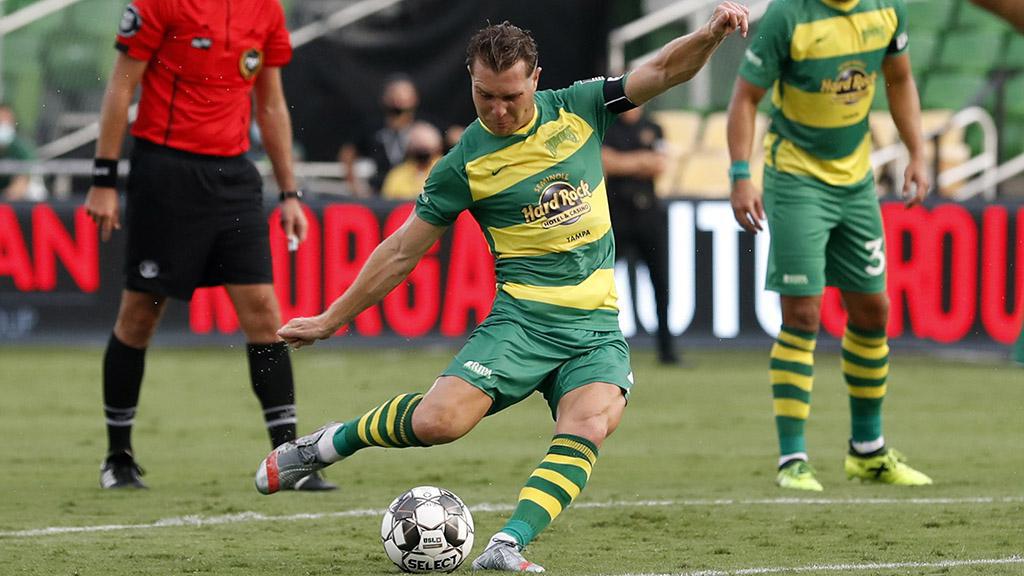 ST. PETERSBURG, Fla. – In 2019, the Tampa Bay Rowdies has no problem finding the back of the net.  Yet despite being one of the league’s best in that department, there was one notable area that the side felt could use improving.

To do it, the club acquired the services of deadeye set-piece taker Lewis Hilton, a move that has paid off handsomely for Head Coach Neill Collins’ side.

In 11 games, the Rowdies have already matched their 2019 total with six headed goals this season, and the club’s numbers in chances created (25) and assists (4) off set pieces and successful corner kicks (22 of 56) have gone from below league average last year to among the league’s best.

Hilton has a great deal to do with that improvement. He’s registered three of the club’s four assists from set pieces this season, putting him tied for the Championship lead with Pittsburgh Riverhounds SC’s Kenardo Forbes. He also leads the league individually in chances created from set plays with 16, putting the ball in the right places where the Rowdies’ formidable aerial presences like Sebastian Guenzatti, Juan Tejada, Forrest Lasso and on Wednesday night Jordan Scarlett can attack the ball.

“It’s always been part of my game, and I try to work on these things leading up to a game,” said Hilton. “It helps when a coaching staff give you information or a scouting report on the team that we’re playing or what areas we want to hit, what type of runs in the box our guys are going to make. All the preparation that goes into it makes it a lot easier.”

That prep work paid off in a big way for the Rowdies on Wednesday night when they took a 3-0 victory against in-state rival Miami FC on the back of two set-piece goals and a penalty kick.

“I think the other night we played well and we created chances in the run of play, but sometimes if you don’t take your chances or the other team defends well, set pieces just give that other opportunity to get a look at goal,” said Hilton. “I think if I’m the one taking the corners or free kicks then I’ve got a responsibility to put it in the right areas and give the guys a chance to get on the end of it.”

Hilton’s arrival has paid off in other ways, too. Part of a strong central midfield rotation that has seen Yann Ekra return to his best this year and both Dominic Oduro and Jordan Doherty produce consistently strong performances, Hilton has solid two-way numbers. As well as his 21 chances created overall, he’s won 14 of 19 tackles and ranks third on the team with 51.7 passes per 90 minutes and an accuracy rate of 85 percent, linking play for the Rowdies attack.

But it’s his ability to deliver a telling ball that could make an important difference to the Rowdies this season. Last season, a Real Monarchs SLC side that recorded four set piece assists off eight set piece chances created rolled to a title, and having that ability to create when things aren’t falling in open play is a valuable asset to have at a club’s disposal.

“I’d be lying if I said when we went to sign Lewis, it wasn’t a big part in the fact that he has the ability to deliver good balls and cause problems,” said Collins. “I wouldn’t say that it’s 100 percent of the time when we have Lewis on the field, we need Lewis on it because we have other players that have done a great job, it’s about having that variety so that other teams don’t know, but we know if we need a ball in the right spot, Lewis is more than capable of it. He’s delivered well for us on that end.”

With the postseason arriving soon, the Rowdies are looking plugged in on an element that could help produce big postseason success.

“I’ve never seen a successful team that didn’t have a guy from the back who couldn’t come up and score a goal, that didn’t have players from the wide positions that couldn’t assist or score a goal,” said Collins. “It’s just a fact. You look at [Sergio] Ramos at Real Madrid, one of the best teams in the world, they’ve still needed him from time to time to come up and head a goal into the net. He’s done it in Champions League Finals, so as we’re always trying to do, we’re trying to have every weapon in our armory, and that’s one that we’re trying to make use of and then improve the other ones as well.”