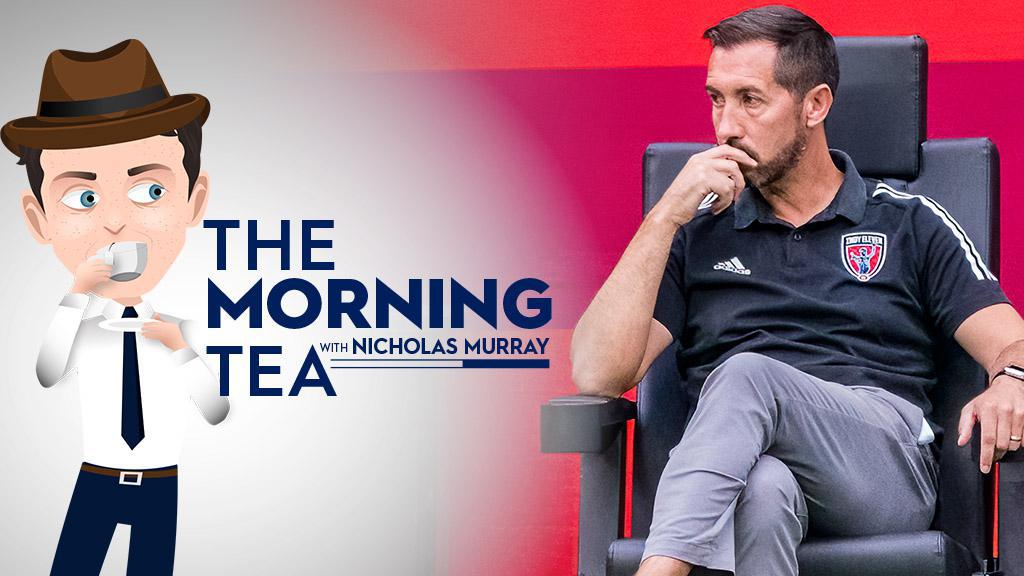 We’ve got a massive game to kick off Week 12 tonight in Group D as the postseason chase continues to build. But before that, we’re going to dig into a team that a month ago was a title favorite, but now is in a downturn that is going to require a big fightback for the playoffs to be waiting in October. Here’s your Morning Tea for Tuesday.

“Obviously, right now after the game, I don’t feel too good, I feel disappointed,” said Rennie. “Overall, I think we are in a great spot, but we have to find the form that we were in earlier in the season and then we have to keep it until the end of the season.”

Saturday night marked the first time this season Indy wasn’t in first place in Group E at the end of the night after the Championship season resumed on July 11. Usurped by LouCity, which ran its undefeated streak against Indy to nine games (5-0-4) including victories in their past two meetings over recent weeks in a 3-1 win at Lucas Oil Stadium, the Boys in Blue were left to reflect on a season that held immense promise potentially fizzling out.

Because, of course, Indy doesn’t just have LouCity to worry about. It’s also got Saint Louis FC sitting one point behind it in third place now, with the group’s two playoffs spots to be decided over the final five games for each side.

So, what’s the problem here? Simply put, Indy hasn’t diversified its attacking options. While Tyler Pasher is having a second consecutive outstanding season in front of goal, the rest of the attack hasn’t produced nearly enough, and it’s causing the entire thing to stagnate.

Since August 1 – when the club’s current downturn really began – Pasher is the only player to have found the net for Indy. There have been contributions from Andrew Carleton, who has recorded assists on two of Pasher’s goals and is tied with the Canadian on six chances created over the past month-plus. But in comparison to some of the other serious contenders in the Eastern Conference, Indy is looking like a one-trick pony when it comes to the final third, and teams are taking advantage.

The numbers really don’t lie here. Across Indy’s first five games back after the season resumption – excluding its season-opening victory against Memphis 901 FC in March – the side was averaging 13.6 chances created per game. In the five games since, that’s been cut to eight per game. The contrast between shots and shots on goal before August 1 (86 Shots / 36 SOG) to after (49 Shots / 15 SOG) also illustrates the point.

That lack of attacking bite might be wearing on the side, which before its loss to Sporting Kansas City II on August 1 had gone more than two calendar years without losing at its home fortress. Now, Lucas Oil Stadium is starting to look like a venue that doesn’t carry that much fear anymore for opponents, especially Louisville.

“This was the worst defeat I can ever remember having in this building,” said Rennie. “Obviously, totally unacceptable from us. I think the first half to give up three goals and at least another one-on-one that Evan [Newton] made a save on, it’s just unbelievable we put that shift in – it’s disappointing.

“From there, we actually created a lot of chances and to not take one of those, especially in the beginning of the second half, that was really a big moment for us, when we had so many chances and so much pressure. When you don’t put one of those chances away, it’s really hard to keep that momentum and keep going to find that energy right there at the end.”

Indy gets another meeting with Sporting Kansas City II on Wednesday night with a chance to regain first place in the standings. In some ways, a quick turnaround could be the best thing for Indy to try and forget a game everyone involved will not want to remember.

But if things start to go wrong against Sporting, the alarm bells might be ringing loud and clear that Indy’s postseason hopes are in jeopardy.

“We really need to turn up and play a lot better than what we saw tonight, and it needs to continue like that until the end of the season,” said Rennie. “We need to fight to make sure that tonight was our low-point.”

(3-2-5)
Group D
The Gist: Second place in Group D is on the line as Austin Bold FC hosts FC Tulsa for the second game of their series on Tuesday night, with the sides still level on points and sitting with the same record after Saturday’s encounter. The teams finished in a1-1 draw then as Bold FC 19-year-old Beto Avila scored his first professional goal to cancel out a spectacular finish by Dario Suarez for Tulsa in the first half. With this the last meeting between the clubs this regular season, finding victory would be a massive boost for either side. With five games to go after for both clubs, though, it might be interesting to see which side will be more eager to take a risk and get all three points if the teams are level late on.
Discipline: None

We hope you're having a happy Labor Day!

And to our friends @USLChampionship...take the day off, @stavz21 has Goal of the Week covered! pic.twitter.com/1jcaau1plh

Game day tomorrow come out and support!! Fans are allowed back in the stadium!! pic.twitter.com/eLE9Bd3n2X

Let’s do it again this Saturday! pic.twitter.com/pAqF9mSqGj

- Want to know where everything stands as we begin Week 12 in the Championship playoff race? We’ve got all the numbers you need to know ahead of the midweek action, and a breakdown of what’s ahead for every team.

- FC Tulsa’s Dario Suarez has three goals in his last two games ahead of the rematch against Austin Bold FC on Tuesday night, but midfielder Eric Bird had praise for the all-around work the Cuban has been putting in. “I can’t say enough good things about Dario over the past two games,” Bird told the Tulsa World’s Barry Lewis. “He’s not only been the difference by scoring goals, but he’s also been putting in more work to help out defensively. He’s a key player for us and he’s proving it on the field.”

- The first professional goal of Arthur Rogers’ career for Hartford Athletic came not long after the English midfielder feared he might have needed an early substitution for an injured shoulder. Instead, he returned to fire home a thunderbolt that’s nominated for the Championship Fans’ Choice Goal of the Week. The Journal Inquirer’s Adam Betz has more on the first-year pro.