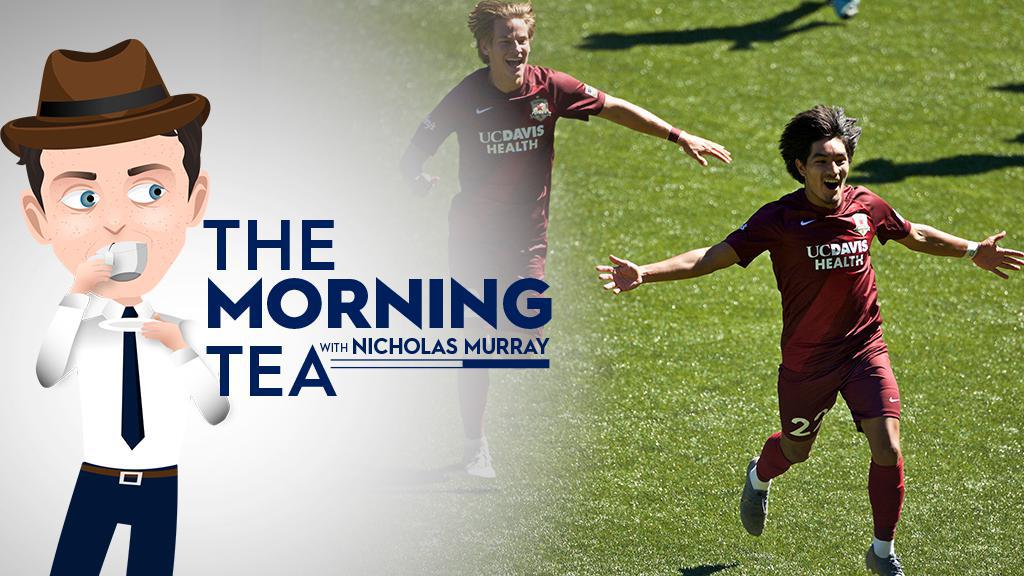 After a big night of action, the playoff picture has become a little clearer in both conferences. But among all of Wednesday’s talking points, the key contributions from two young standouts to their club’s success is part of a larger trend across the Championship. Here’s your Morning Tea for Thursday.

You’re 18 years old, and with your side needing victory your coach summons you to the sideline, giving you a chance to go and make something happen.

What do you do?

Well, if you’re Sacramento Republic FC’s Julian Chavez and Mario Penegos, all you do is each score your first professional goals nine minutes apart from one another, with the latter goal bringing down the curtain on an incredible ending to a 2-1 victory against the Portland Timbers 2 on Wednesday afternoon.

And then, you go celebrate.

Enjoy this one, Mario

When your first pro goal is a stoppage time match winner @Juju_Chavez, take a bow. pic.twitter.com/CY9vfKKlvL

It’s not uncommon now to see players like Penegos – who earlier this year signed professional terms with Republic FC – and Chavez – who is currently on a USL Academy contract – competing for independent Championship clubs. The change in attitude that has taken place over recent years that has seen coaches trust the youngsters in their charge to stand up to the challenge before them has been a very welcome development.

Even now, you’re seeing players like former USL Academy signing Josh Penn sign professionally with Indy Eleven, or those like Jonathan Gomez elect to turn professional with Louisville City FC. Add to that the number of USL Academy and professional signings that are competing for clubs across the board this season and there's a movement saying, “if you’re good enough, you’re old enough.”

That’s the way it’s been for a while in Sacramento. The club quickly incorporated its own Academy program after it was founded and has been looking to offer opportunities to players coming through the ranks as often as it can while still pursuing the silverware Republic FC and its fans crave. You can see an even greater focus on that this season after Briggs’ promotion from being the club’s Academy Director to taking over as the First Team Head Coach. He knows what he’s got in players like Hayden Sargis, with the 18-year-old having played every game this season on the back line.

Briggs has handed opportunities to four players aged 18 and under with each making multiple appearances so far this season, including 16-year-old Rafael Jauregi, the youngest of the current crop. On Wednesday, Sargis was once again solid at the back, and when they got their chances as substitutes in the final 10 minutes both Penegos and Chavez rose to the moment for a game neither will ever forget.

“That's just rewarding for everyone in general, so I'm over the moon for Mario and Juju,” said Briggs. “They deserve to be rewarded for the goals they've scored and giving them time in crucial moments shows the trust we have in them.”

With the first big moment of their careers now written, we wait with anticipation to see what’s next for both.

"I don't have a problem being held to a high standard."

— Head coach @RickSchantz1 discusses the high expectations for the club and why he embraces the culture.#RisingTogetherButSeparate | #OwnThe* pic.twitter.com/eVD9mnBjwC

- The past week has seen the official formation of the USL Black Players Alliance, the postponement of games to allow for reflection on systemic racism in the United States, and player-led ideas including that of the 1 minute, 46 second moment of silence during games. The Athletic’s Jeff Rueter has an in-depth look at how USL Championship and League One players made statements on race, whether they voted to play or not.

- As one of the few players to have played in every season of the Championship’s history, all-time regular season appearance leader George Davis IV has been part of the league since its beginning. The veteran midfielder has also been part of the establishment of the newly-formed USL Black Players Alliance. WLKY’s Andrew Chernoff spoke with Davis about the new organization.

- The Tampa Bay Rowdies took another big step toward the postseason on Wednesday night with a 3-0 victory against in-state rival Miami FC at Al Lang Stadium. The Tampa Bay Times’ Darek Sharp recaps the action and has postgame comment as the Rowdies rebounded from their first loss of the season.

- North Carolina FC earned a much-needed 2-1 road victory against Birmingham Legion FC to stay in touch with the top two positions in Group G ahead of Saturday’s visit to the Charlotte Independence. WRALSportsFan.com has all the details as Nazmi Albadawi and Dre Fortune notched the goals for the visitors at BBVA Field.

- The Independence also ran out winners on Wednesday with a 2-0 victory against Memphis 901 FC at AutoZone Park, where a bright opening for the hosts was gradually slowed thanks to a stellar display by Charlotte goalkeeper Brandon Miller. The Memphis Commercial-Appeal’s Corinne Kennedy was on hand and filed this report.

- FC Tulsa earned its first home win at ONEOK Field in its new colors as Dario Suarez struck twice in a 2-1 victory against Rio Grande Valley FC. The Tulsa World’s Barry Lewis was on hand to see the hosts pick up a win that set up its two-game trip to Austin Bold FC in ideal fashion.

- Orange County SC rallied for a 2-1 victory against the LA Galaxy II on Wednesday night to move into second place in Group B ahead of their rematch on Saturday. LA Galaxy Confidential’s Shawn Medow looks back at the contest that saw Los Dos produce bright moments, but not quite enough to maintain their recent undefeated run.

- Memphis 901 FC’s Keanu Marsh-Brown has made a positive impact at his new club this season, and this week he was put in the spotlight by the Memphis Commercial-Appeal’s Corinne Kennedy to talk about his arrival in Memphis and what he likes to get up to away from the field.

- Collaborating with local artist Noe’ Barnett, New Mexico United’s Devon Sandoval has teamed up with Starr Brothers Brewing, Stixon Labels & NM Plastics to produce 2,000 labels that can go on beer and water bottles, and soda cans, that say, “Day of The Dread.” The labels are being sold at Starr Brothers Brewing, with proceeds going to New Mexico Dream Center, which helps with child trafficking prevention, and Breaking The Silence New Mexico which helps with suicide prevention in teens and young adults.