TAMPA, Fla. – The USL Championship announced the Team of the Week Presented by Cleer Audio for Week 10 of the 2020 regular season on Tuesday, with Pittsburgh Riverhounds SC’s Ryan James earning Player of the Week honors after recording two goals to lead the Hounds to victory against Hartford Athletic.

James put in a sterling two-way performance, joining the attack from his left wingback position to register a pair of goals on two shots for the game while also holding down his flank defensively, winning 7 of 9 duels and completing 52 of 58 passes for the game. The victory moved Pittsburgh three points clear of Hartford at the top of Group F in the Eastern Conference.

James earned 43 percent of the ballot for his performances. The LA Galaxy II’s Augustine Williams finished second on 22 percent after recording three goals and one assist as Los Dos took a pair of victories against the Portland Timbers 2 and Las Vegas Lights FC to move into second place in Group B’s standings. 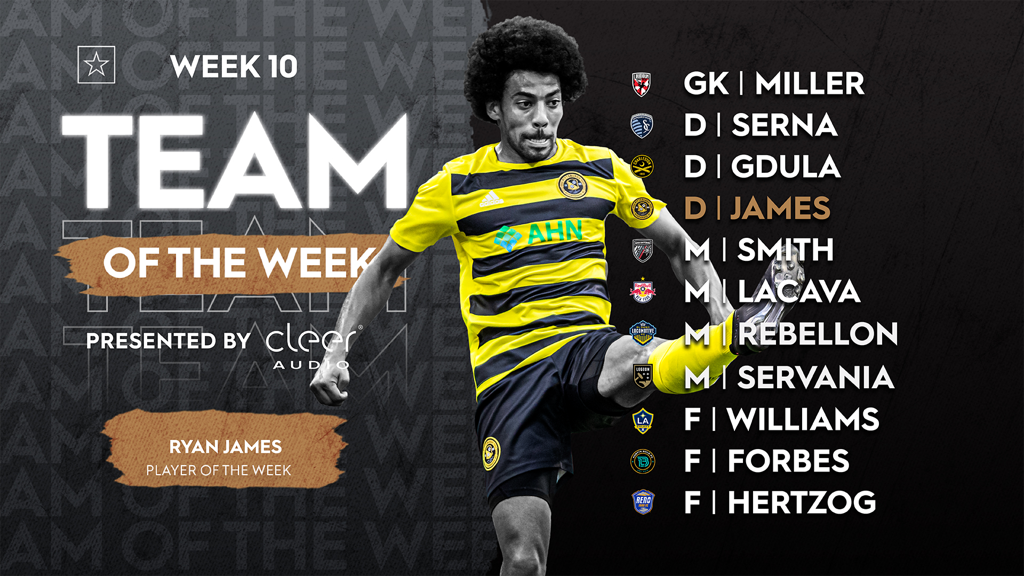 GK – Colin Miller, Loudoun United FC: Miller recorded nine saves, including denying a penalty kick, to match the most saves in a single game this season in Loudoun’s 3-2 defeat to the New York Red Bulls II on Saturday evening.

D – Logan Gdula, Charleston Battery: Gdula scored once, and completed 77 of 92 passes and 2 of 2 dribbles and made 18 recoveries as the Battery swept a pair of victories against Miami FC and the Tampa Bay Rowdies.

D – Ryan James, Pittsburgh Riverhounds SC: James scored a pair of goals, completed 52 of 58 passes and won 7 of 9 duels in a standout display that helped the Hounds to a 3-0 victory against Hartford Athletic.

M – Jaden Servania, Birmingham Legion FC: Servania recorded one goal and one assist and completed 15 of 16 passes and recorded three chances created as Legion FC took a 4-1 victory against the Charlotte Independence.

F – Augustine Williams, LA Galaxy II: Williams recorded three goals and one assist and completed 39 of 48 passes across two contests as Los Dos took a pair of victories to move into second place in Group B.