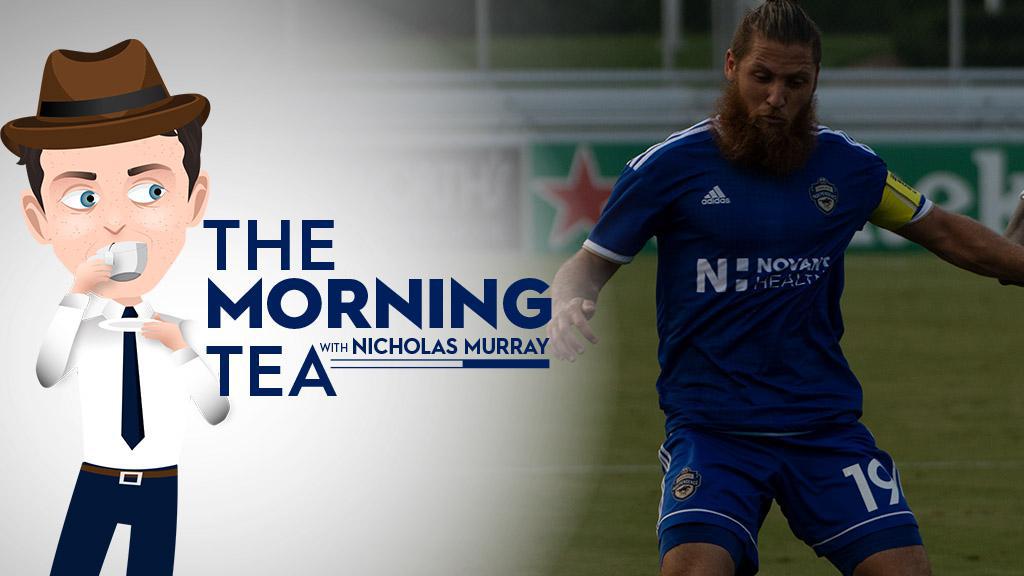 On a night that saw some statement victories across the Championship’s five games, and one of the most incredible draws in the league’s history, one result above the rest. Here’s your Morning Tea for Thursday.

We asked the question of the Charlotte Independence.

On Wednesday night, they answered emphatically, and it might prove a turning point in the race for the postseason in the Championship’s Eastern Conference.

The last time the Independence had defeated North Carolina FC was more than five years ago in the Lamar Hunt U.S. Open Cup. That was, in fact, the only time they’d come out on top against their in-state rival, including an 0-fer since NCFC had joined the Championship in 2018.

Thanks to Rey Ortiz’s first professional goal, Charlotte took a 1-0 victory at the Sportsplex at Matthews on Wednesday night and earned a five-point lead on their rivals for second place in the Group G standings.

They also gave an indication that this rivalry had changed for good.

“Huge for us, a really sweet victory,” said Head Coach Mike Jacobs. “Obviously, against NCFC it was definitely a game we had to grind out and fight through. You could see fatigue in the guys, but they showed a lot of heart and character to come through and just find a way to win on the night.”

It certainly was a battle. But that was certainly a difference to some of the one-sided contests we’d seen in the past. And in Ortiz’s finish, the Independence got a moment of brilliance that would light up any contest. His control of Dane Kelly’s cross from the left with his thigh set up a perfect chance to strike on the volley, and the former University of Portland standout struck sweetly into the left corner of the net.

“Once it left my shoe, I knew it was going in the net,” said Ortiz. “It was good, I owed it to my team. I felt like I was getting a lot of shots and no end products, so I’m happy that goal led to a win.”

There will be three more meetings between the Independence and NCFC this season, and there’s still a very long way to go before anything is decided when it comes to the postseason. Both sides will face key divisional games this weekend, with Charlotte hosting group leader Birmingham Legion FC and North Carolina returning home to face Memphis 901 FC.

One of those three remaining meetings will be in the final week of the regular season, a potential decider for which side moves on to the playoffs and which goes home.

The Independence showed on Wednesday night gave their fans the answer they had craved, and showed they’re ready for the challenge ahead.

“Anytime you go against a rival, fans or no fans, we know what’s at stake especially with the point situation,” said Ortiz. “They’re looking for points and we are too. We want to maintain as close as possible to a playoff spot, especially with two teams going through, so we want to make sure we keep earning points.”

Over the last six months, we have had the honor of developing a friendship with @LaticsOfficial.

The incredible supporters, staff and players of Wigan need us now more than ever.

You can have a hand in saving the club.#ForTulsa | #wafchttps://t.co/yo69cPWgJb

Rise & Shine the grass is watered, time to get to work! pic.twitter.com/NePemeeoSn

Thanks @CleerAudio and @USLChampionship for these sound proof headphones. Already try them out an i can say they're pic.twitter.com/apfyhwcXmj

- Louisville City FC closed the gap to LIPAFC rival Indy Eleven to three points as Paolo DelPiccolo's goal proved the difference in a 1-0 victory at Lynn Family Stadium. WDRB's Eric Crawford has more on a result that continued LouCity's undefeated run so far through the month of August.

- Colorado Springs Switchbacks FC made a piece of Championship history as it rallied from a four-goal halftime deficit against Austin Bold FC to earn a 4-4 draw at Weidner Field. The Colorado Springs Gazette's Vinny Benedetto was on hand for a game that for the first time in the Championship saw both sides score four consecutive goals and end all square.

- The Charleston Battery built their lead to 12 points over Miami FC in Group H with a 3-1 victory at the Patriots Point Soccer Complex on Wednesday night, a result that extended Charleston's undefeated streak to five games overall and put it within four points of group leader the Tampa Bay Rowdies ahead of Saturday's contest between the top two.

- Former Portland Timbers 2 forward Augustine Williams came back to haunt his ex-club as he scored twice for the LA Galaxy II in a 3-2 victory for the visitors at Providence Park. The win snapped a two-game losing streak for Los Dos and kept them within touching distance of the playoff positions in Group B.

- One of the keys to New Mexico United's place at the top of Group C? The club's depth has allowed Head Coach Troy Lesesne to rotate his lineup to keep his best players and a strong supporting cast fresh throughout the season so far. The Albuquerque Journal's Geoff Grammar has more on a good problem to have for United's coaching staff.

- Former Chivas de Guadalajara Academy product Cristian Ortiz arrived recently at Austin Bold FC. The 21-year-old spoke with the club’s website about his time at one of the top clubs in North America, and what he hopes to bring to Bold FC’s playoff push.

- Rio Grande Valley FC and San Antonio FC sit at the opposite end of the Group D standings as they prepare to meet on Friday night at H-E-B Park on ESPN Deportes. Beautiful Game Network’s Carson Merk looks ahead to the next chapter of the South Texas Derby.

- Whether Hartford Athletic or Pittsburgh Riverhounds SC will emerge as Group F winner will likely be determined by the three games between the sides, kicking off this Friday. Hounds Head Coach Bob Lilley is pleased with the position his side is in, but is aiming to build momentum over the second half of its regular season.

- Sacramento Republic FC made an intriguing addition to its goalkeeping corps with the arrival of Brady Scott on loan from Nashville SC for the remainder of the season. Scott was the Golden Glove at the Concacaf U-20 Championship in 2018 as the United States U-20 National Team took the title, and provides depth after the injury to Republic FC goalkeeper Adam Grinwis earlier this season.