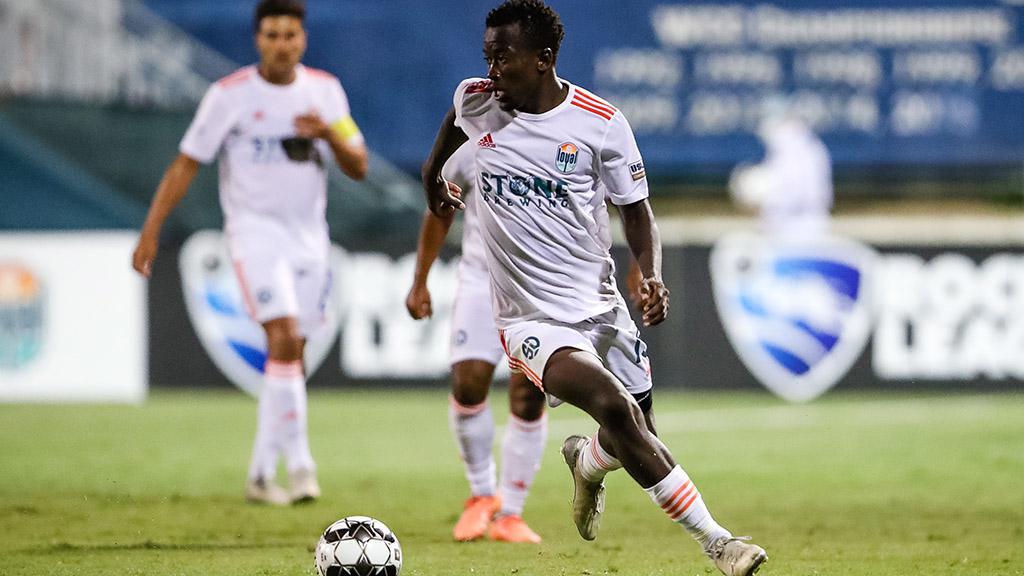 San Diego Loyal SC's Tumi Moshobane was one of the players that threatened to strike on Wednesday night for the hosts, but SD Loyal came up empty despite a positive overall display. | Photo courtesy San Diego Loyal SC

SAN DIEGO – There was plenty for San Diego Loyal SC Head Coach Landon Donovan to be pleased with about his side’s performance on Wednesday night against Orange County SC at Torero Stadium.

Offensively, SD Loyal recorded its most shots in a game in its inaugural season (22), set a new season-high for created chances (14) and matched its second-most shots on goal in a game this year (7).

None of those efforts found a way past a spectacular display by OCSC goalkeeper Frederick Due in a 2-0 defeat that allowed the visitors to close the gap to second-place San Diego in Group B to three points with Orange County holding three games in hand over SD Loyal after its stop-start resumption.

“I mean, we can’t play much better, but we need to score,” said Donovan post-game. “We talked about it last week, we were much more direct, we were much more vertical, and we created a ton of chances and now we've just got to take pressure off our back line by burying teams.

“That game should have been 2- or 3-0, or 3-1 at halftime, and when it’s not and a team stays around and they get a fortunate flick off Carlos’ head into a breakaway, that can happen. So, it’s frustrating, but we have to focus on the performance, and we have to keep going.”

SD Loyal is making a strong bid to become the latest first-year side to reach the USL Championship Playoffs in its inaugural season. There have been peaks and valleys in the side’s attacking production, however. After reaching double-digits in chances created and in its victories against Tacoma Defiance prior to the season’s suspension and against Real Monarchs SLC in its return to action in July, there were three games where the creativity in the final third went missing, even with another victory against Las Vegas Lights FC thrown into the mix.

That made Wednesday night’s outing a welcome return to the sort of soccer Donovan is looking for from his side, but nonetheless a frustrating one as well.

“I’ve been in that spot where you go through a stretch where you’re not scoring, and it’s easy for everyone to say, ‘well, just score more goals,’” said Donovan. “I don’t worry about the goals, the goals will come, I worry about the chances. Last week against Sacramento we didn’t have a lot of chances. Tonight, I think we had 22 shots and probably seven or eight big chances, now it’s got to mean something to you to hit the net and score.”

The big challenge for SD Loyal will be to try and keep some kind of gap between itself and the third-place LA Galaxy II and fourth-place Orange County as it heads to face first-place Phoenix Rising FC on Saturday night. Phoenix has been perfect at Casino Arizona Field so far this season, including a 5-2 victory against New Mexico United in its last outing this past Saturday.

Facing off against the side that remains the favorite to lift the trophy at the USL Championship Final at the end of the season for the first time is certainly going to be a big test, but it’s one Donovan believes his squad can rise to.

“Having a midweek game while they’ve been resting and preparing all week, and we’ve got to travel there, really challenging. Really, really challenging,” said Donovan. “But it’s not an excuse. If that’s our mindset, that we’re going to make excuses then we might as well not get on the bus.

“I’m very optimistic in how we played, now we just have to really become a team that’s going to win, and by scoring goals, you win. You can’t be content with not scoring or maybe a goal, when you have that many chances you’ve got to score multiple goals and finish the game.”