Partnership with Phoenix Children’s Hospital Serving as an Inspiration for Players, Staff 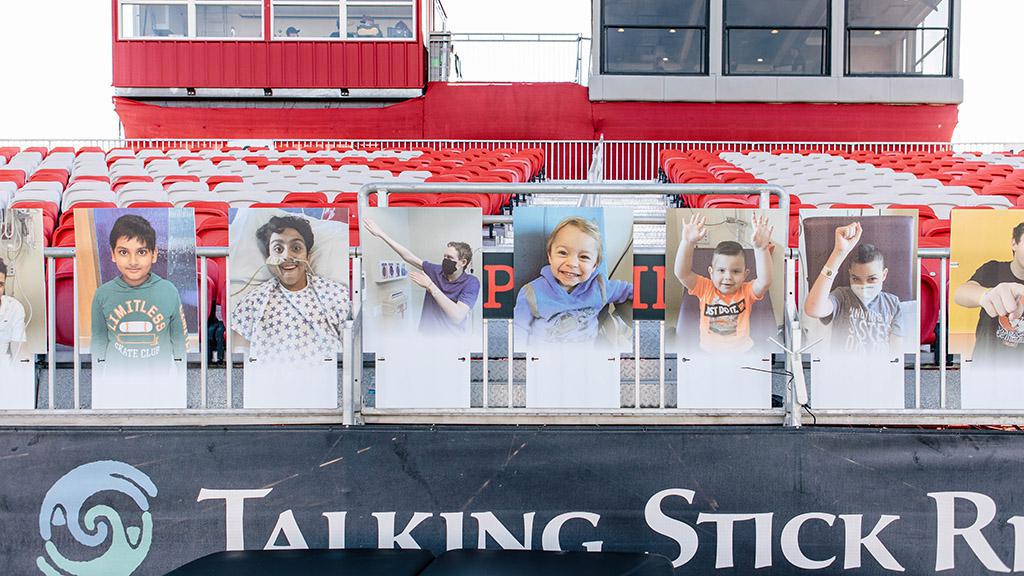 With no fans at Casino Arizona Field, images of patients at Phoenix Children's Hospital sit behind the benches at Phoenix Rising FC's home thanks to an initiative set up by the PRFC Fan Show's Kevin Gates. Photo courtesy Grace Stufkosky / Phoenix Rising F

PHOENIX – If you looked very closely this past Saturday night, you might have seen two notable USL figures in the stands for one of the biggest games of the Championship season as Phoenix Rising FC hosted New Mexico United at Casino Arizona Field.

Of course, President Jake Edwards and VP of Public Relations & Communications Ryan Madden were only there in spirit, but it’s the thought that counts.

Man it feels good to be back in the stands.

But my head is enormous. pic.twitter.com/M7RUCgdpwS

More notable, however, were the collection of faces behind the team benches at the venue from the Phoenix Children’s Hospital. A favorite place for Rising FC players to visit and meet with patients during their downtime away from the field, it had been the charity selected by the squad to support this year.

When the COVID-19 pandemic began, it meant no more visits for the foreseeable future, but the club’s announcement that it would allow fans to purchase seats in which cutouts of their images would be places for the season planted a seed in the mind of the PRFC Fan Show’s Kevin Gates.

“Our club decided to do these cutouts for fans, so Kevin reached out to me to say, ‘Hey, wouldn’t it be cool if we got some of the kids, I want to sponsor some of the kids at the Children’s Hospital,’” said Rising FC Head Coach Rick Schantz recently. “I told him, ‘that’s an awesome idea, let’s put it out to the fans and let’s run with it, I think it’ll be really popular.’”

The initial idea for the GoFundMe was the target of paying for 50 images of the hospital’s patients at the venue, a target of $1,250. Within hours, that total had been reached, and a day later the total had reached $1,785, enough to place images of all 70 children the hospital had in its care in the stands.

“Neither he nor I [were expecting this],” said Schantz. “We were expecting maybe five or 10 cardboard cutouts, and I think he put together a crowdfunding or whatever you call it and in like a couple of hours he had $2,000.”

Donations came from numerous Rising FC fans, but also some other notable names from around the league. Among them was USL color commentator Devon Kerr, who also got to call the game between Rising FC and El Paso Locomotive FC on August 1 when the cutouts were revealed.

ICYMI: We had some very special guests from @PhxChildrens at the match this week (safely of course!)

A special thank you to @prfcfanshow, who spearheaded the effort to get the kids to our match and thank you to everyone who donated for the cutouts!#RisingTogether pic.twitter.com/i7HCoO6Kse

At a venue that is among the most raucous in the Championship when filled with supporters, the cutouts have also a been a positive motivator for the players.

“It was something our players were super-stoked about,” said Schantz. “They stay up in the stadium, so after training they always walk by and look at the pictures. I think it’s good for them, it makes them realize that people are watching.”

As Phoenix looks to continue its perfect home record on Saturday night against San Diego Loyal SC, the fans may be silent for now, but their presence is certainly being felt.