Get to know Memphis’ Mark Segbers off the field; Hartford’s Downs chimes in on Athletic’s turnaround 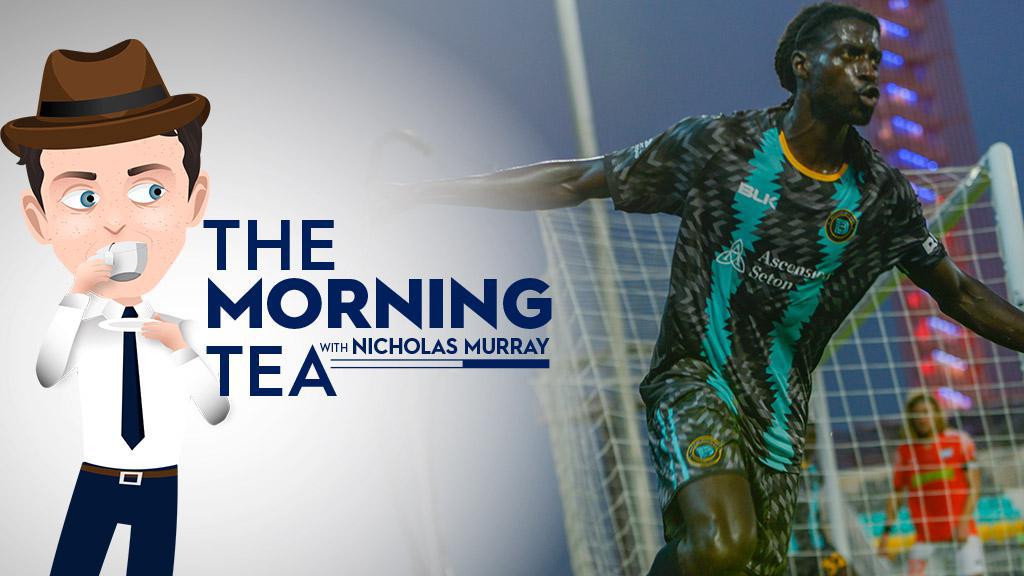 After an exciting night of Championship action on Wednesday, our attention turns to the weekend and one of the players that may have a key role to play in one of Saturday night’s must-see games. Here’s your Morning Tea for Thursday.

When Carl Haworth made the offseason move to Indy Eleven, I made a case that last year’s Eastern Conference Finalist could claim the best outside backs pairing in the USL Championship.

That may still be the case, but there’s a duo in Texas that’s certainly making its own strong case. Austin Bold FC’s Ish Jome and Sean McFarlane have both been fine players in the past, and might end up being a key factor in Bold FC’s playoff chances this season.

For the 25-year-old Jome – who was on Tuesday named to the Championship Team of the Week – the two-way game he brings is essential to bringing maximum pressure to whoever he is going up against.

“My goal individually is just to simply dominate every matchup I come up against,” Jome told the Beautiful Game Network’s Carson Merk. “Making sure my side is locked down defensively and that the fullback and winger have a terrible night trying to defend my winger and I.”

It’s a role that Jome has performed well in the past. Having appeared in Major League Soccer for Minnesota United FC, the Gambian has made 56 appearances in the Championship since joining Nashville SC during the 2018 season. Over that time, he’s recorded 10 assists, logged more than 200 crosses from open play and recorded 69 chances created.

On top of that, he’s won 64.5 percent of his duels and 76.8 percent of his tackles while recording 50 interceptions, an illustration of how he’s held up his end defensively.

“My job first and foremost is to be a lockdown defender,” Jome told Merk. “But it is very important for me to be able to help the team offensively as I have the skills to do so and that just adds to the overall threat of the great team we have.”

McFarlane has been stellar as well. A season ago he finished third in the Championship with 12 assists but has also been a strong defender to go with his attacking production. It makes for a tough night on either side of the field for Austin’s opponents when both are in full flight.

“It’s really fun playing alongside Sean,” Jome told Merk. “He’s been one of the guys I’ve got on with really well on the team and he’s a very good player. He helped me see more from a player perspective what coach wants from his fullbacks.”

After picking up its first win after the resumption last Saturday, Austin will be looking to boost its playoff chances when it visits San Antonio FC in two days at Toyota Stadium. If Jome and McFarlane have their say, it could be another positive step for Bold FC.

What a difficult match, but we fought extremely hard all 95mins. Big ups to the big man @MVOextreme!! Extremely thankful to have gotten my first goal of the year on to the next one #MikLo5 #KRO #HammerDown @bhmlegion https://t.co/lwFQ56nXFS

We did our first check donation from the BYF x @thequeenspod foundation! We donated $800 this month to Block Love & plan to continuously help donate monthly!
-This is one of the biggest accomplishments of my life & I’m beyond thankful to everyone who helped support the cause! https://t.co/wH8AsHxi1E pic.twitter.com/PnVjBK9CqN

- Memphis 901 FC’s Mark Segbers has been one of the brightest offseason additions to the club this season. The fixture in the club’s starting lineup spoke with the Memphis Commercial Appeal’s Corrinne Kennedy about his lockdown routine, ice cream and growing up in St. Louis.

- After a tough inaugural season, Hartford Athletic has won four of its first five games this season to put itself in a strong early position to reach the Championship Playoffs. Massachusetts native Nicky Downs was one of the holdovers from Year One, and spoke about the turnaround with the Journal Enquirer’s Adam Betz.

- For a second consecutive Donner Pass Derby, Sacramento Republic FC got a goal from the penalty spot and held off Reno 1868 FC to take victory and move level on points at the top of Group A while snapping Reno’s three-game winning streak. Indomitable City Soccer’s Alicia Rodriguez has more on the victory and Sacramento’s third consecutive shutout.

- Prior to the contest, Sacramento Republic FC announced a recent MRI detected a torn ACL for goalkeeper Adam Grinwis, which could sideline the former Orlando City SC goalkeeper for the remainder of the season.

- Tacoma Defiance announced on Wednesday it had parted ways with Australian midfielder Jesse Daley, by mutual agreement. Sounder at Heart’s Dave Clark paid tribute to the central midfielder who made an impact on the side over the past three seasons, with the help of Defiance assistant coach Wade Webber and players Justin Dhillon and David Estrada – now with New Mexico United.

- There weren’t any goals, but FC Tulsa showed it can compete with the best the Championship has to offer in its home opener against San Antonio FC at ONEOK Field. The Tulsa World’s Barry Lewis has more on a big night for the club as it made its first bow on home turf after this postseason’s rebrand.

- The Tampa Bay Rowdies continued their undefeated start to the season with a 2-0 victory against Atlanta United 2 on Wednesday night that featured a standout finish by Juan Tejada. The Tampa Bay Times’ Darek Sharp has more on a win that saw the Rowdies extend further their lead in Group H.

- Orange County SC had to withstand pressure from hosts San Diego Loyal SC in its first action in August, but second-half goals by Ugo Okoli and San Diego native Aodhan Quinn earned the club’s second win of the season on Wednesday. Angels on Parade’s Alicia Rodriguez has the details on a big road win for one of the Western Conference’s favorites.

- There are parallels between Loudoun United FC’s first and second seasons, writes Black and Red United’s Ryan Keefer, after the side claimed its first win of the 2020 season in the same place as its first, on the road against the New York Red Bulls II. A 2-1 victory got United in the win column before it visits Louisville City FC on Saturday night ahead of next week’s home opener at Segra Field.