TAMPA, Fla. – The USL Championship announced the Team of the Week Presented by Cleer Audio for Week 7 of the 2020 regular season on Tuesday, with Phoenix Rising FC’s Junior Flemmings earning Player of the Week honors after recording his first hat trick in the Championship on Saturday night.

The Jamaican international struck three times as Rising FC moved to the top of Group B with a 5-2 victory against New Mexico United at Casino Arizona Field. Flemmings is now tied for the league-lead in goals with seven for the season alongside Indy Eleven’s Tyler Pasher.

Flemmings earned 67 percent of the ballot for his performance. Austin Bold FC’s Ish Jome received 20 percent of the poll after recording two goals and one assist in his side’s 4-1 victory against Rio Grande Valley FC on Saturday night at Bold Stadium. 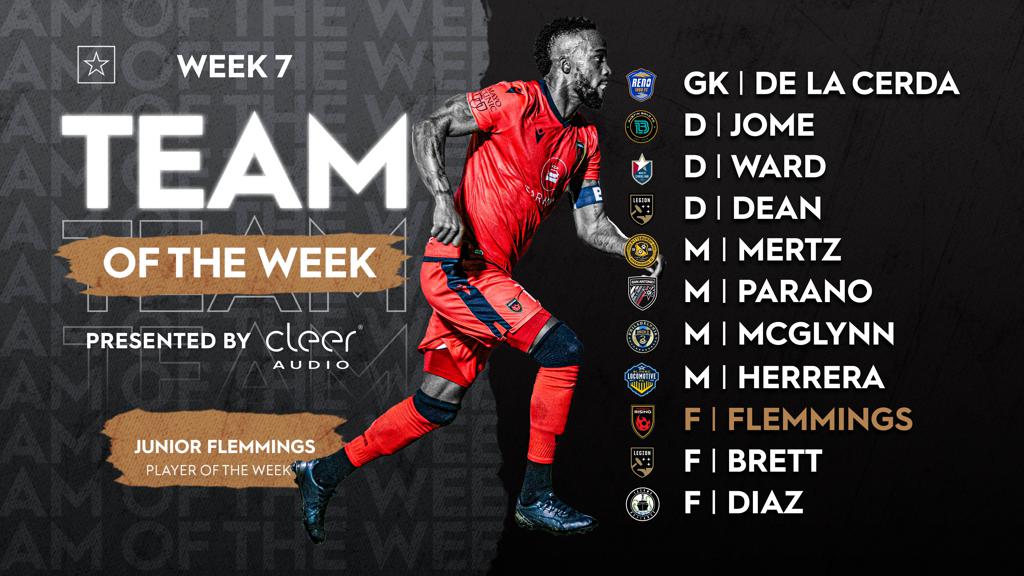 D – Ish Jome, Austin Bold FC: Jome recorded two goals and one assist, completed 52 of 65 passes and made six recoveries to lead Austin to its first victory since the season resumption with a 4-1 win against Rio Grande Valley FC.

D – Akeem Ward, North Carolina FC: Ward scored the only goal of the game, made four interceptions and nine recoveries and completed 19 of 28 passes in NCFC’s 1-0 road victory against Memphis 901 FC.

D – Jonathan Dean, Birmingham Legion FC: Dean recorded a goal and assist, had three chances created and completed 51 of 56 passes overall while also winning 5 of 7 duels in Birmingham’s 4-1 victory against the Charlotte Independence.

M – Jack McGlynn, Philadelphia Union II: McGlynn led the Union II to their first win of the season, recording one goal and one assist, four chances created, four interceptions and six recoveries while winning 4 of 4 duels.

M – Chapa Herrera, El Paso Locomotive FC: The local standout scored a pair of second-half goals and completed 35 of 37 passes as Locomotive FC got back on track with a 4-2 victory against Colorado Springs Switchbacks FC.

F – Alec Diaz, Tacoma Defiance: Diaz recorded two goals and one assist, had four shots on goal, complete 2 of 2 dribbles and had three chances created overall in Tacoma’s 4-0 victory against the Portland Timbers 2.