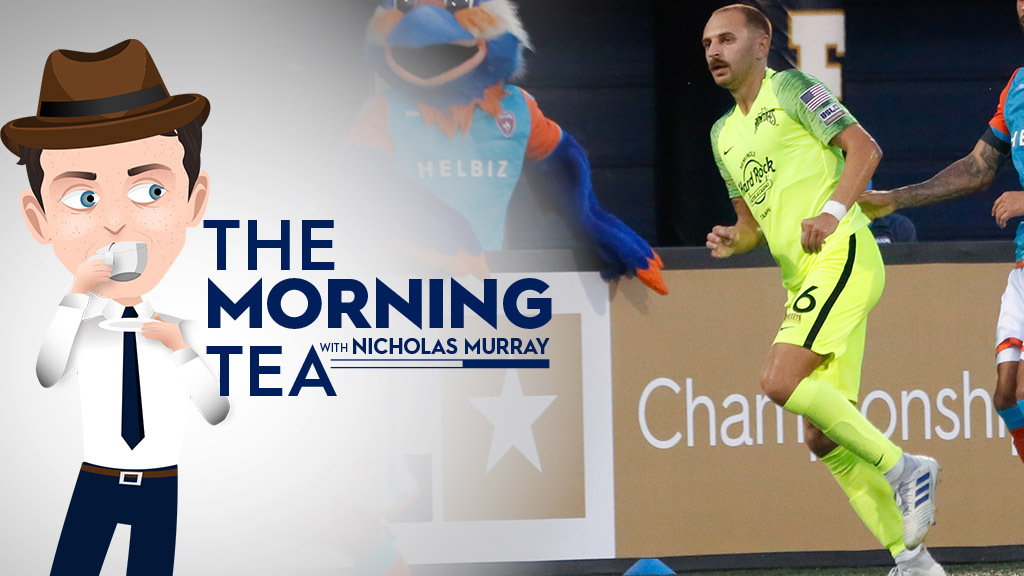 Two big nights of action await us in Week 8 of the regular season on Wednesday and Saturday night. Today, though, we start by checking in at one of the Championship’s undefeated squads.

As quickly as games are going to arrive during the current abridged regular season, maybe the most important thing a coach can have at his disposal is a squad filled with enough depth to carry a team through games on short rest over multiple days.

With an undefeated start to the season, that’s a luxury the Tampa Bay Rowdies appear to have among the Championship’s current group leaders. While the side is again getting strong production from captain Sebastian Guenzatti – who scored in his fourth consecutive game on Friday night in the club’s 3-0 victory against Miami FC – the side has also had 16 different players start and another three appear off the bench so far this season.

“It’s very hard as a coach to constantly tell 20 guys that their impact and their influence on the squad are as important as each other,” said Rowdies Head Coach Neill Collins on Monday. “Players always put a value on if they’re picked in the Starting 11, that their value is greater than someone who’s coming off the bench. I think we’re very fortunate with the squad we’ve got that we’ve got guys who are more than capable of starting games, but you can only pick 11.”

Among those that have played what might be thought of as a supporting role is Max Lachowecki, who made his fifth appearance as a substitute in six games against Miami. But while that may be the perception, the trust that Lachowecki has from Collins and his teammates is reflected in his performance, most notably when he was brought on as a halftime substitute in a 1-1 draw on the road against Birmingham Legion FC, and then in the first half against Miami when Leo Fernandes had to be substituted after sustaining a knock in the 19th minute.

Lachowecki isn’t just a good player, he’s also one that can quickly attune himself to the rhythm of the game and get up to speed quickly, something that Collins values highly.

“One of the reasons we brought Max to the club is because we know whether starting or from the bench, his attitude and his mentality toward the game is the same,” said Collins. “That’s what we expect, but it is great that he’s able to do it, because it is a talent, being able to come onto a game and pick it up. There are some players who either start or don’t generally come on, they’re just not used to it, but it is great, and it just makes my decisions harder.”

For Lachowecki, the team is now starting to find its rhythm more consistently with five games completed since the season resumed. That’s not only noticeable in the club’s new-look defense – which has now recorded back-to-back shutouts, but the signs that other newcomers are starting to find their feet in the squad.

“We’re growing in confidence every week,” he said. “Now we’re going on our fourth, fifth game after the break, guys are starting to figure one another out and where they’re going to be on the field, and partnerships all over the field as well.”

With a busy week ahead that features a contest against Atlanta United 2 on Wednesday night in Georgia before a return to Al Lang Stadium for a rematch with Miami on Sunday, the Rowdies’ depth is going to be tested again in the next six days.

Anyone else want in on the Ismaila Jome Fan Club?

Some perks include his first goal, that assist, and this goal. #DaleBold pic.twitter.com/2Kz72Ba5J2

Anyone know what happened next? #HammerDown pic.twitter.com/RjmxyFj0Dn

- Without a point through three games of its first season in the Championship, Miami FC will be led on the sideline by Paul Dalglish for the remainder of the 2020 season. Dalglish had moved upstairs to become the club’s President last fall after achieving success in the past two years and now will try to get the side back on track to make a push for the playoffs in Group H.

- Louisville City FC may have only come away with a 1-1 draw from its game against Indy Eleven on Saturday night but the performance made the team believe its back on the right path. The Louisville Courier-Journal’s Dominique Yates writes as it prepares to face Sporting Kansas City II on Wednesday night, the club’s focus is now on converting the chances it creates more efficiently.

- Phoenix Rising FC’s Junior Flemmings has been one of the standout performers in the Championship this season and notched his first hat trick in the league this past weekend against New Mexico United. The Jamaica Star’s Daniel Wheeler caught up with the Jamaican international to talk about his experience returning to play this summer after the season suspension.

- When Charlotte Independence forward Dane Kelly scored the first goal at the Sportsplex at Matthews in 294 days to put his side ahead against the Charleston Battery, he did more than score his first home goal for the Jacks. He took a knee and raised his fist to the sky. The Charlotte Post’s Ashley Mahoney has more on Kelly’s celebration and the team’s continued support of the Black Lives Matter movement.

- Loudoun United FC will play its home opener against on July 19 against Pittsburgh Riverhounds SC with limited fans in attendance at Segra Field. Under Phase 3 of Virginia Governor Ralph Northam’s reopening guidelines sports venues are allowed to operate at 50 percent occupancy or with 1,000 patrons, whichever figure is lower.

- Louisville City FC will be without the player who has worn its colors more than any other in Niall McCabe for the forseeable future after the Irish midfielder underwent surgery on his right foot. McCabe has started 104 regular season games for LouCity and made 132 regular season appearances overall for the club in the Championship, and is expected to be back in time for the end of the season.

- Reno 1868 FC played its home opener on Saturday night and took a 2-1 victory against Tacoma Defiance without fans in the stands. The Reno Gazette-Journal’s Duke Ritenhouse was on hand, however, and had plenty of takeaways about the action on the field, and the surrounding atmosphere to the contest.