From a first meeting in the Open Cup to last year’s playoffs, LouCity and Indy Eleven have built a memorable rivalry 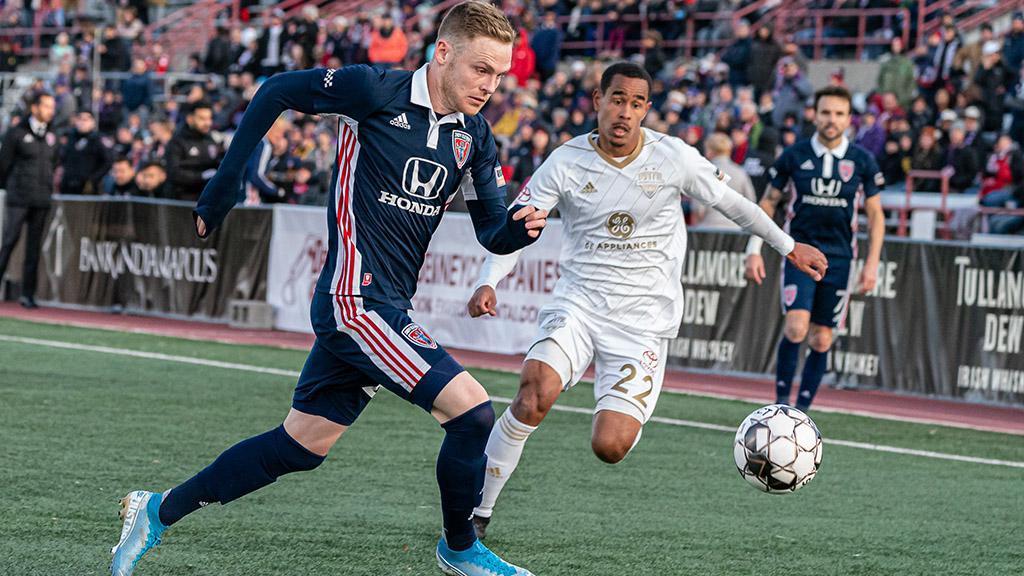 There are numerous headline-worthy rivalries in the USL Championship, many of which have been pushed even further to the fore this season thanks to the regionalized groups that make up the format for the 2020 campaign.

A handful of those are playing out again this weekend, with Miami FC playing host to the Tampa Bay Rowdies on Friday night before more big contests on Saturday including those between Phoenix Rising FC and New Mexico United, OKC Energy FC and San Antonio FC, and the Charlotte Independence and Charleston Battery.

Arguably at the top of the list right now, though, is the Louisville Indianapolis Proximity Association Football Contest contested by Louisville City FC and Indy Eleven. Over the past six seasons overall, and the past three since Indy joined the Championship, there has been a healthy animosity built up between the two clubs and sets of fans that has been capped by some remarkable on-field action.

In consultation with my colleague Scott Stewart – whose previous work saw him work for both clubs – we’ve put together a list of the five most memorable of those contests ahead of Saturday’s first meeting of the 2020 season at Lynn Family Stadium.

Indy was in its second season and LouCity in its first in the 2015 season – but in different leagues – which meant their first opportunity to meet in official competition arrived via the Lamar Hunt U.S. Open Cup. After Louisville got past Lansing United on a goal by Charlie Adams, it set up a match many beyond the two sets of fans were intrigued by after the strong supporter cultures that had sprung up around both organizations at their birth.

It ended up being a tight affair as both teams had chances to find the net in regulation but were unable to find a way past LouCity goalkeeper Scott Goodwin and Indy goalkeeper Kristian Nicht in regulation. In extra time, however, Louisville found a way through thanks to an arrow of a shot by Nate Polak from 20 yards into the bottom-right corner of the net in the 115th minute. Four minutes later, Sidney Rivera added a second – what would prove his only goal for the side on loan from Orlando City SC – to give first blood to LouCity.

As the Indy Eleven joined the Championship for the 2018 season, it entered a league where Louisville City FC had established itself as the top dog in the competition. Having reached the Eastern Conference Final in its first two seasons, LouCity was coming off its first USL Championship Final victory in 2017 and had begun the 2018 campaign in blistering form with five wins out of six in an undefeated start.

That run came to an end at the hands of Indy. While the club’s late move to the Championship during the offseason had meant a major task for new Head Coach Martin Rennie to build a squad, the side had made a reasonable start to the season. Its only defeats had come at the hands of FC Cincinnati – which would go on to record numerous records in the 2018 campaign – and victories on the road against North Carolina FC and at home to Nashville SC had put the club on solid footing.

In front of more than 9,000 fans at Lucas Oil Stadium, the game was a close one, but when LouCity’s Paco Craig was whistled for a handball in his own penalty area with 13 minutes to go it handed Indy an opportunity it would grab with both hands. Ayoze converted from the spot and brought LouCity’s undefeated start to the season to an end. “We worked very hard for today because we know that (Louisville City) is a great team,” Ayoze said after the game. “I think today we pressured hard. Everyone was working 100 percent, and when everyone works the team has very good quality.”

Already qualified for the 2018 Championship Playoffs, Indy Eleven was in fifth place and still had its seeding in its own hands when it arrived to face Louisville City FC for the final game of the regular season. One defeat later on a goal by Cameron Lancaster – his 25th of the season – and victories the following day by both the New York Red Bulls II and Philadelphia Union II, however, and it meant a return trip to Slugger Field for the Eastern Conference Quarterfinals the following week.

And that turned out not to go so well for the visitors. By that point of the season, LouCity had rounded into its typical late-season form with its win against Indy the sixth in a row to end the regular season. Under new Head Coach John Hackworth, the side was looking to make history as the first side to win back-to-back USL Championship Finals, and its postseason opener made a mark as the most lopsided victory for either side in the series so far.

A pair of goals from Niall McCabe of almost identical set piece routines were split by a goal from Ilija Ilic just before halftime that put the hosts firmly in control less than five minutes into the second half. Indy replied midway through the second half thanks to Soony Saad, but with 17 minutes to go the final coup de grace was applied by Lancaster on an exquisite free kick. “We know what it takes,” said McCabe. “We’ve been here before. We have the experience. The stage doesn’t get to you. We’ve been here numerous times. We have guys from year one and we’ve made it this far.”

In rivalries in the Championship, it’s not been uncommon for players to switch sides. Louisville City FC got its own experience with that after the 2016 season when both Aodhan Quinn and Kadeem Dacres made the jump to FC Cincinnati. But in the history of the LIPAFC, there has only been one player that has made league appearances for both clubs, current Indy forward Ilija Ilic.

And so, when one of the club’s original squad members for the 2015 season returned to Slugger Field for his first visit with Indy, it was a pretty noteworthy moment. After all, Ilic had recorded 19 goals and 15 assists in 84 Championship appearances for Louisville and played a role in the club’s back-to-back title victories. “They have one of our dear friends Ilija [Ilić] on there, and he's always a dangerous player especially,” said LouCity Head Coach John Hackworth in the buildup to the game. “All the home fans know what he can do.”

With Indy riding a three-game winning streak as it arrived for the Friday night clash, Ilic was in the starting lineup to face his former teammates and fans and had another good night for the Boys in Blue. In the 43rd minute, his angled pass sent Tyler Pasher on a breakaway to put Indy ahead, getting Ilic’s name on the scoresheet at Slugger Field once again. The night wouldn’t go the visitor’s way overall, though, as Louisville found a second-half equalizer thanks to Abdou Mbacke Thiam, one of the new arrivals to take Ilic’s place in LouCity’s attacking corps.

By the end of Indy Eleven’s second season in the Championship, it had formed into a legitimate title contender of its own. Having previously defeated the New York Red Bulls II and an impressive road victory against Nashville SC, all that stood between Head Coach Martin Rennie’s side and a place in the club’s first USL Championship Final was the two-time defending title-holder, Louisville City FC.

In a game that had the highest stakes of any the two had played, the contest lived up to the billing. Another tight game was broken open by Indy’s Tyler Pasher in the 67th minute, with the newly-minted forward using his pace to latch onto a through-ball by Dane Kelly before lashing home a finish to the left corner. It was Pasher’s 13th goal of the season, his second in the postseason, and appeared to have set the hosts – who had gone undefeated at home throughout the 2019 season – on their way to history.

But then, along came Antoine Hoppenot. On what would have been close to Louisville’s final roll of the dice in the fourth minute of stoppage time and with LouCity goalkeeper Chris Hubbard joining the mass of bodies in the Indy penalty area, the ball deflected to the veteran forward. His half-volley was sharp, low, and found its way into the left corner of the net. Given new life, the two-time defending title-holders took little time in seizing the initiative as Magnus Rasmussen put Louisville ahead four minutes into extra time, and with seven minutes to go Luke Spencer converted from the penalty spot to put the game away for good.

“We have been tested so many times that it is normal for us now,” said LouCity Head Coach John Hackworth after the game. “It doesn't make it any easier, but we should never discount what these guys have done and what they are doing.” And we should never discount the prospect of what will happen when LouCity and the Boys in Blue meet now and in the future.