Adam Najem looking forward to getting back in action with Rowdies; Locomotive FC hoping luck changes in front of net soon 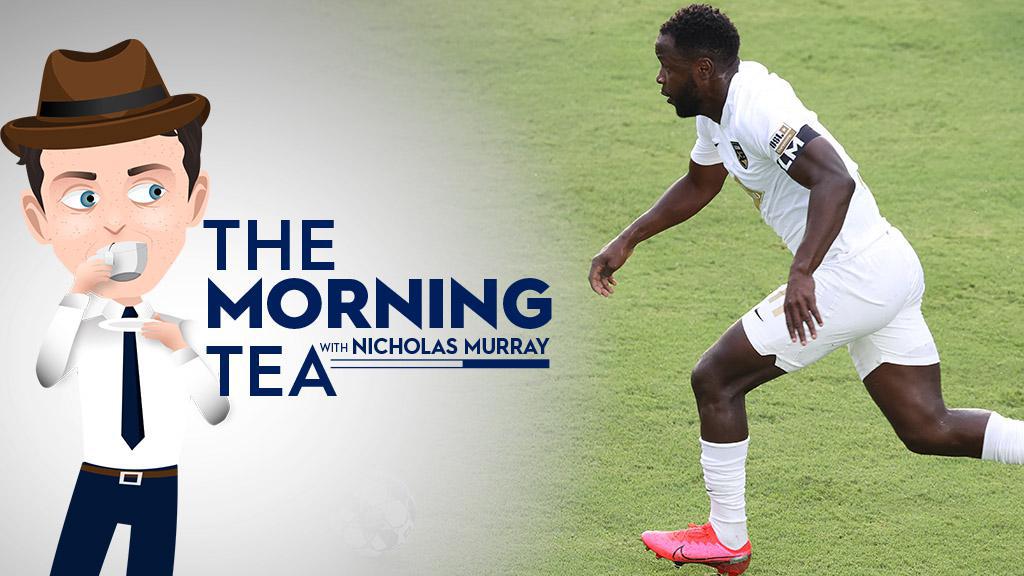 The first in a weekend full of big rivalry contests kicks off tonight in South Florida, but FIRST, we’re going to take a look at an important breakthrough from the Championship’s midweek action. Here’s your Morning Tea for Friday.

For a forward, especially one that’s been as prolific as Neco Brett had in the past two seasons with Pittsburgh Riverhounds SC, getting those first goals under your belt at your new club is an important moment.

For Brett and Birmingham Legion FC, his first two official goals for the club on Wednesday night in a 4-1 victory against the Charlotte Independence at BBVA Field were the breakthrough each had been looking for.

“It feels pretty good,” said Brett after the game. “As a forward you always want to be scoring goals. What was most important was getting three points, especially at home.”

Getting off the mark this quickly bodes well for Brett. In his first start for Riverhounds SC in 2018 he notched a hat trick against Toronto FC II before going on to record 15 goals during the regular season, helping Pittsburgh to its first home playoff game in club history.

Then a season ago he found the net in his third start of the season against Louisville City FC, which set him on the way to a 17-goal campaign that saw Legion FC on the wrong end of the biggest performance of his career, a four-goal game in the Eastern Conference Quarterfinals of the 2019 USL Championship Playoffs.

“We knew Neco was a big-time player based on what he did to us last year, he destroyed us a couple times last year,” said Legion FC assistant coach Khano Smith. “We were really excited to get him, and we knew what we were getting. He’s really sacrificed a lot for the team since he’s been here, had a little injury at the beginning but we knew it was just a matter of time because we see his talent every day.”

Due to the shortened season, Brett may be hard-pressed to reach the totals of his previous two campaigns this season. If he can come close to his average of a goal every 151.9 minutes with the Hounds, however, Legion FC is going to be well on the way to a second consecutive playoff berth.

“The coaches and the players have welcomed me with open arms, so it feels good to be here,” said Brett. “I feel at home right now. I just need to continue to put in the work and help the team get results.”

(3-0-2)
Group H
The Gist: Florida rivals Miami and Tampa Bay meet for the first time in the Championship sitting at opposite ends of Group H in the Championship. The Rowdies are undefeated in their first five games of the season, having built a five-point lead at the top of the group with a 2-0 victory against the Charleston Battery behind goals from Sebastian Guenzatti and Malik Johnson last Friday night. Miami, meanwhile, has lost each of its first two games of the season after a 4-3 defeat on the road against Atlanta United on July 29. As it hosts its home opener, Miami is in need of a big performance to kick-start its season against one of the Eastern Conference’s clear contenders.

to get the tv set
ESPN Deportes on Saturday.

better time to catch MEM and NC
in Group G!

How do you break the defense? Be. The. Defense. pic.twitter.com/5Y66VHHLog

- Pittsburgh Riverhounds SC playmaker Kenardo Forbes wasn’t aware he was close to breaking the Championship’s assists record until recent weeks. The league’s new all-time regular season assist leader isn’t as concerned with his own numbers as he is with helping the Hounds win, though, as the Pittsburgh Post-Gazette’s Andy Kostka learned.

- After having his season cut short in Poland when the league was suspended due to the COVID-19 pandemic, new Tampa Bay Rowdies signing Adam Najem is looking forward to getting back into action. The Unused Substitutes’ Jake Nutting went in depth with the playmaker about his time overseas and being reunited with former Red Bulls Academy teammate Evan Louro at Al Lang Stadium.

- After being one of the breakout first-year players in the Championship a season ago, Juan Tejada has settled into his role with the Tampa Bay Rowdies, and life in downtown St. Petersburg. The Tampa Bay Times’ Kyle Wood has more on the Panamanian forward, who featured in the bay area at IMG Academy and Eckerd College before signing with the Rowdies.

- Conventionally, Daniel Bruce would be playing an attacking role for New Mexico United. Some injuries on the club’s backline upon the season’s resumption have seen the young Englishman called in at fullback, however, highlighting his versatility in the squad. The Albuquerque Journal’s Geoff Grammar has more ahead of Saturday’s game in Phoenix.

- El Paso Locomotive ranks in the Top 10 in the Championship in shots on goal, total shots and chances created this season, but has only five goals to show for it so far. The El Paso Times’ Bret Bloomquist writes the team is hoping the numbers start to turn in their direction as they look to get their season back on track against Colorado Springs Switchbacks FC on Saturday.

- A season ago, Santi Moar was one of the central figures in New Mexico United’s successful inaugural season on the field. On Saturday night, he could face his former teammates after a move to Phoenix Rising FC that figures to add some more spice to the rivalry between the clubs. The Arizona Republic’s Briar Napier caught up with the Spanish winger to talk about the game.

- San Diego Loyal SC will square off with Las Vegas Lights FC for the third time this season looking to bolster its spot at the top of Group B. With only one loss in its inaugural campaign so far, things have been going remarkably close to the start the club would have hoped for, and Head Coach Landon Donovan told the Star News’ Phillip Brents he believes there’s more to come from his squad.

- Are you looking for a sweet new addition to your soccer wardrobe? FC Tulsa is here to help. As part of the Craft family’s purchase of the club last year, it also acquired the rights to all of the old Tulsa Roughnecks logos and marks. They’re now planning to use the retro design on club apparel which will be available for sale later this month.