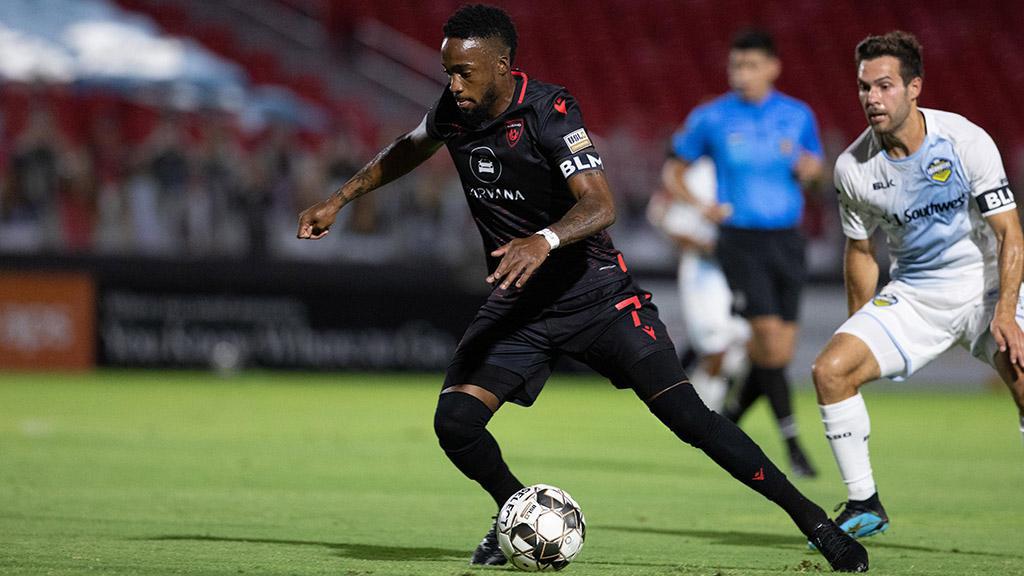 Junior Flemmings' game has found another level since arriving at Phoenix Rising FC, something he attributes to a growing maturity and experience in the Championship and at the international level. | Photo courtesy Grace Stufkosky / Phoenix Rising FC

PHOENIX – Two years ago when Junior Flemmings was coming off a season with the Tampa Bay Rowdies that had shown flashes of the talent the young Jamaican possessed but ultimately fell short on goals and success, he had a point of introspection.

“[I] looked back on myself, what I could have done and how I could have gone about doing it,” Flemmings said this week. “I think that’s why I did come here to Phoenix and worked on in terms of getting stuff right in that sense, and it really, really paid off in the past 12-to-14 months since I’ve been here.”

You can say that again.

Saturday night’s tally against El Paso Locomotive FC marked Flemmings’ 20th goal in the USL Championship’s regular season and playoffs in Rising FC’s colors. It was a beautiful blend of the audacious skill and powerful finishing that has been a hallmark of his play since arriving in Phoenix for the 2019 season, and the major step forward he’s taken on the field since.

Part of that has come through experience. From the ups and downs of his time in New York – where he was playing a central role in the Red Bulls II’s double-winning season in 2016 until injury cut his campaign short – to last year’s historic regular season and postseason disappointment with Rising FC.

The other part has come from maturing off the field. Father to his daughter, Jade – who will turn four years old in the coming weeks – the responsibilities of family life have also helped the 24-year-old grow in other ways.

“It definitely brings a broader picture in terms of your thinking, like in the bigger picture, and to be honest I think that’s what motivates me a lot too,” said Flemmings. “She really looks up to me as her dad, and it’s really an honor to be honest, especially on gameday when they turn up to the game and you hear the cheering.”

It’s a maturity that has been noticeable to Rising FC Head Coach Rick Schantz as well, and a sign of a player who is firmly in charge of where his future lies.

“When he was in New York, he was still pretty young. He didn’t realize what his long-term plan was, and when you don’t know who or where you’re going or what you want to be it’s kinda hard to be patient,” said Schantz. “For us, last year was kind of a revelation for him. The way we pressed and kind of allowed him to be aggressive out on the wing, he’s so physically powerful and he’s so fast. This guy often hits over 10 meters per second, which is lightning-quick.

“He’s relentless, he’ll run for days, but his maturity has been unbelievable, and I say that just of his personal life. He’s a father and he’s really focused on his daughter in his off hours and making sure he’s raising a good young lady.” 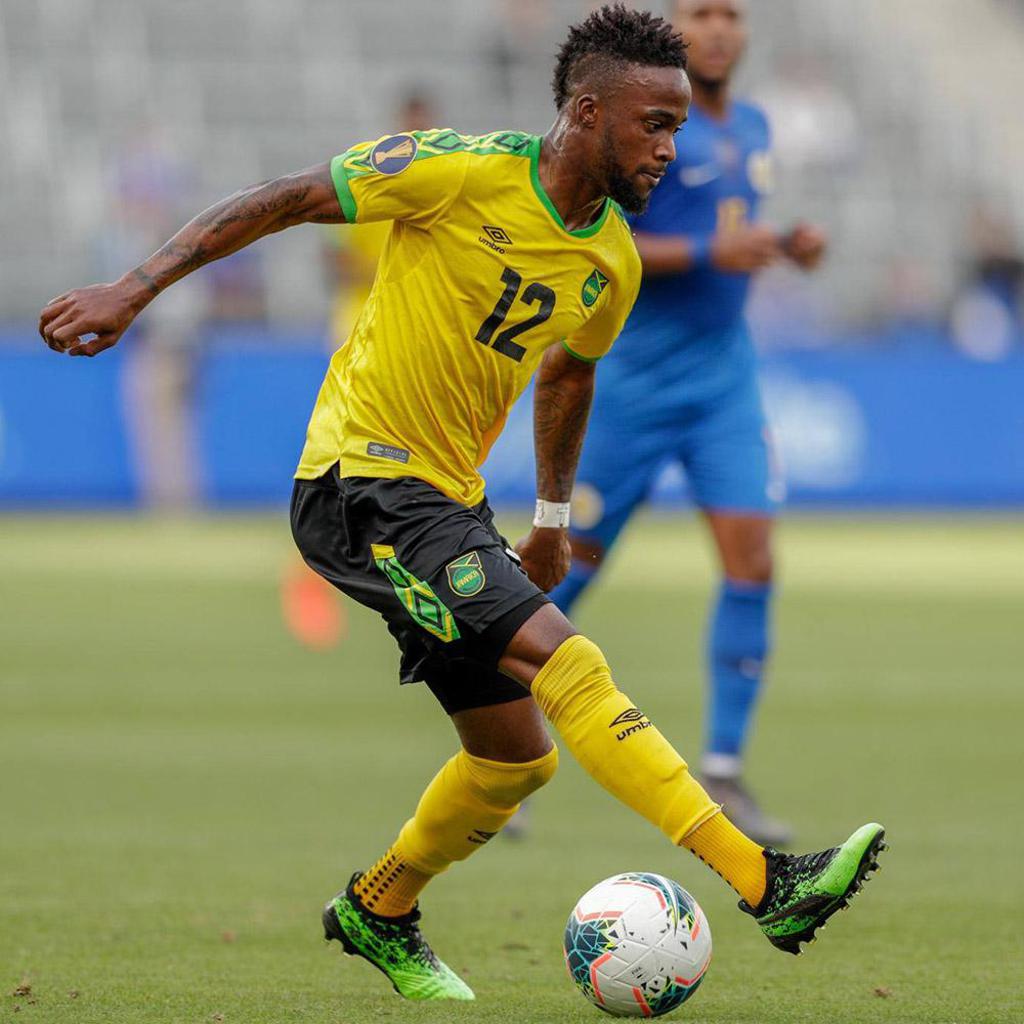 Junior Flemmings in action for Jamaica at the 2019 Concacaf Gold Cup where he started in all five contests as the Reggae Boyz reached the Semifinals. | Photo courtesy Concacaf

The higher level of quality he’s brought on the field has not only been noticeable within Phoenix’s camp, but also in Flemmings’ native Jamaica. After first receiving a call-up to the National Team while he was in New York in 2017, he’s now started to become a regular in the Reggae Boyz squad. Last summer he started all five games the country played at the Concacaf Gold Cup, and that only added to his belief in his own abilities.

“That’s something huge in terms of going through it all to represent my country at the highest level in the biggest tournament in North America, and to also be a starter throughout the tournament was great,” said Flemmings. “I think that it helped my game also, playing against top players in a big tournament and matching up against them showed I have the ability to compete. I learned a lot from that tournament.”

What does that mean for his future? There’s certainly the chance that Flemmings will be following the path of former Rising FC teammates Adam Jahn (Atlanta United FC) and Amadou Dia (Sporting Kansas City) to Major League Soccer, or another top-flight league in the future. Flemmings says he isn’t thinking about that now and is aiming to stay in the moment with Rising FC, but he believes he’s ready for that chance.

“At the end of the day it all comes down to the opportunity,” he said. “I don’t want to seem too overconfident and say, ‘yeah, I could potentially go to MLS, and be on a roster.’ What I know for sure is I can definitely go anywhere and be a competitor and compete for game time wherever that is, but yeah, for sure, that is something I’d like to do.”

“I’ve told him that if he keeps this up in his performances, we don’t know if he’s going to be in the USL for much longer,” he said. “I really hope that he gets an opportunity to play at a very high level because he’s worked for it, he’s earned it, every bit. He’s a great kid.” 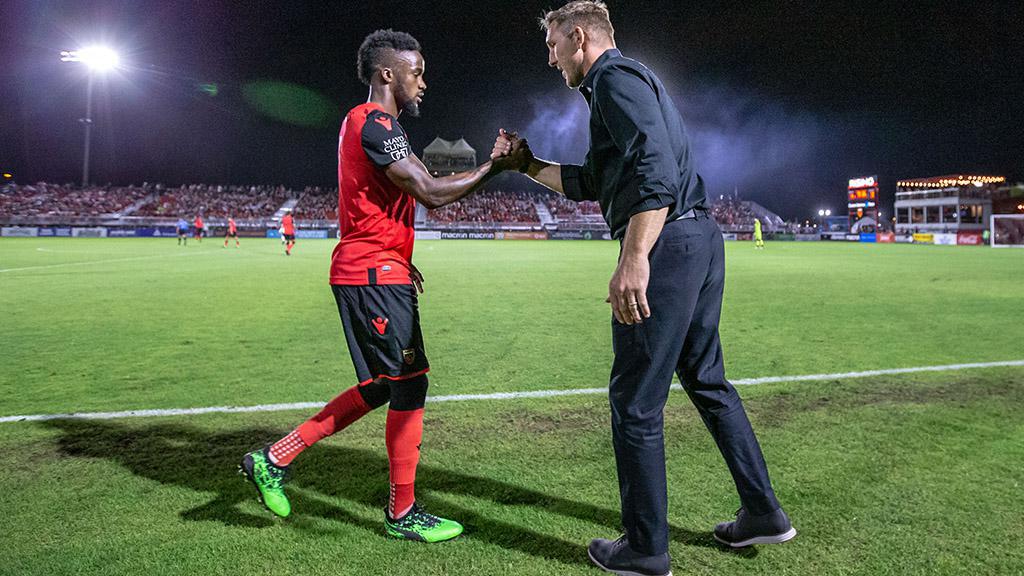 What Flemmings is certain of for now, though, is that nothing is promised and the work to remain on top of his game – and to keep Rising FC moving toward its first Championship Final victory – remains to be done.

“You see how far this club has come in the past three or four years, to have an honor like [winning the league title] to show all the hard work that the staff and the players have put in would be a tremendous feat,” said Flemmings. “We just have to take it one step at a time and see what happens when comes on the day, because on the day is what matters. You can have the best record and the best players on your team, but if you don’t turn up to play, you won’t win.

“We have to … account for that fact that everyone wants to be the teams that’s like, ‘we beat Phoenix Rising’. We here at Phoenix Rising, I think that’s what’s made us a really competitive organization, a really competitive group because we want that pressure, we want to feel that pressure because that’s what makes you a better player day in and day out.”