TAMPA, Fla. – The USL Championship announced the Team of the Week Presented by Cleer Audio for Week 6 of the 2020 regular season on Tuesday, with Reno 1868 FC’s Christiano Francois earning Player of the Week honors for his standout performances in a two-win week for the club.

The Haiti international recorded his first two-goal game in the Championship last Wednesday night as Reno swept to a 4-1 victory against the Portland Timbers 2 at Providence Park. Francois then provided the assist on teammate Brent Richards’ game-winning goal on Saturday night in a 1-0 victory against Silver State Cup rival Las Vegas Lights at Cashman Field.

Francois earned 42 percent of the ballot for his pair of performances. Hartford Athletic’s Danny Barrera finished second with 32 percent after recording one goal and two assists – reaching 30 assists in the Championship for his career – in the Athletic’s 4-1 win against Loudoun United FC on Sunday night. 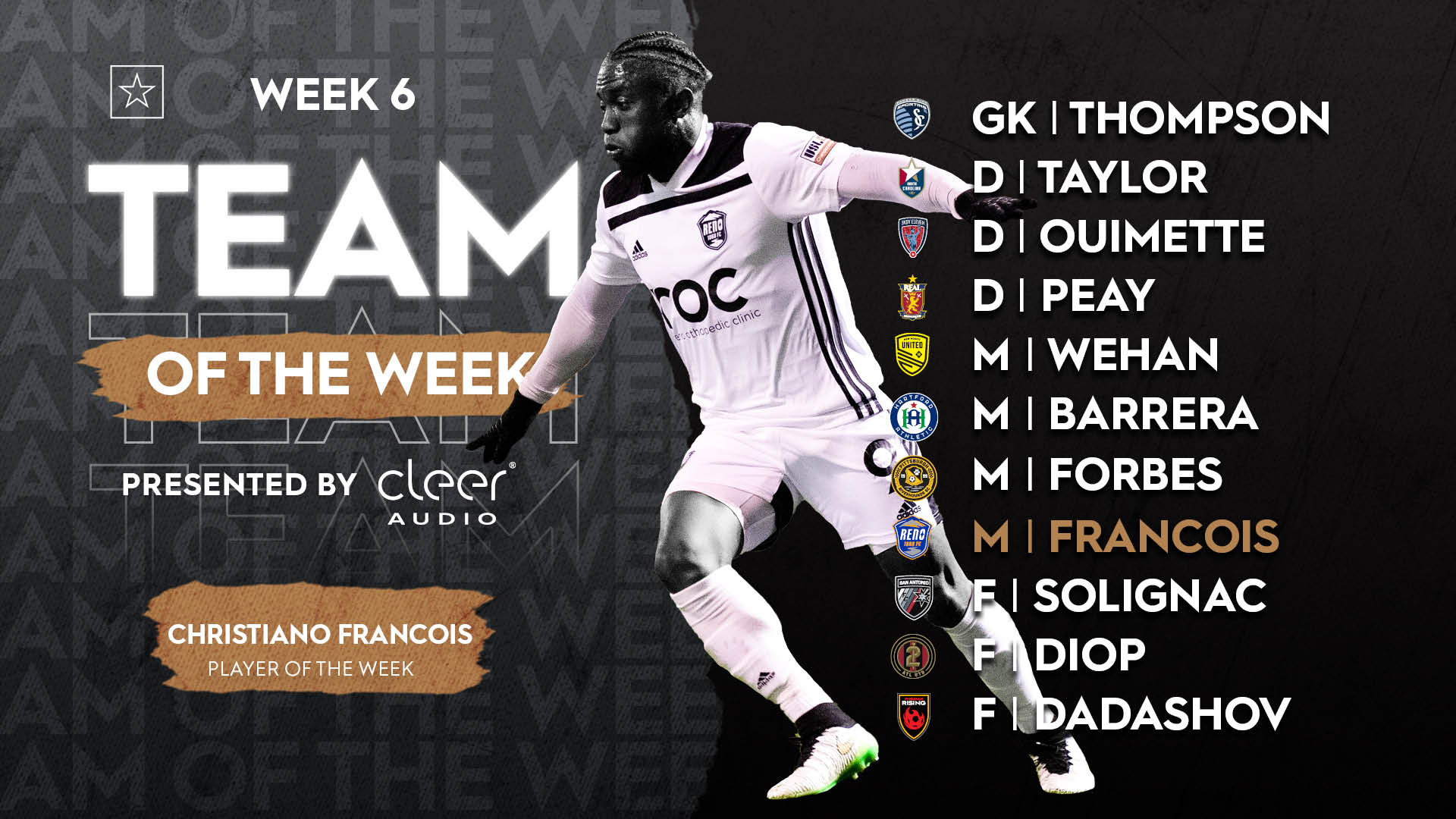 D – Karl Ouimette, Indy Eleven: Ouimette recorded a pair of assists and completed 54 of 63 passes overall in the Eleven’s 4-1 win against Hartford Athletic, while also recording five clearances and winning 3 of 3 tackles.

M – Chris Wehan, New Mexico United: Wehan scored in his fourth consecutive game since the season resumed, and also recorded an assist as New Mexico took a 3-0 victory on the road against OKC Energy FC.

M – Danny Barrera, Hartford Athletic: Barrera reached 30 regular season assists for his career as he led the Athletic to a 4-1 victory against Loudoun United FC on Sunday night with a goal and two assists at Dillon Stadium.

M – Kenardo Forbes, Pittsburgh Riverhounds SC: Forbes notched his sixth and seventh assists of the season to become the Championship’s all-time regular season leader with 38 for his career in the Hounds’ 4-0 victory against the Philadelphia Union II.

M – Christiano Francois, Reno 1868 FC: Francois notched a pair of goals in a standout display against the Portland Timbers 2, and then provided the assist on Brent Richards’ game-winner against Las Vegas Lights FC in a two-win week for Reno.

F – Luis Solignac, San Antonio FC: Solignac notched a pair of goals to help SAFC continue its undefeated start to the season with a 4-2 victory against Austin Bold FC on Saturday night.

F – Amadou Macky Diop, Atlanta United 2: Diop scored a pair of goals to lift Atlanta to its first victory of the season as it defeated Miami FC 4-3 at Fifth Third Bank Stadium.