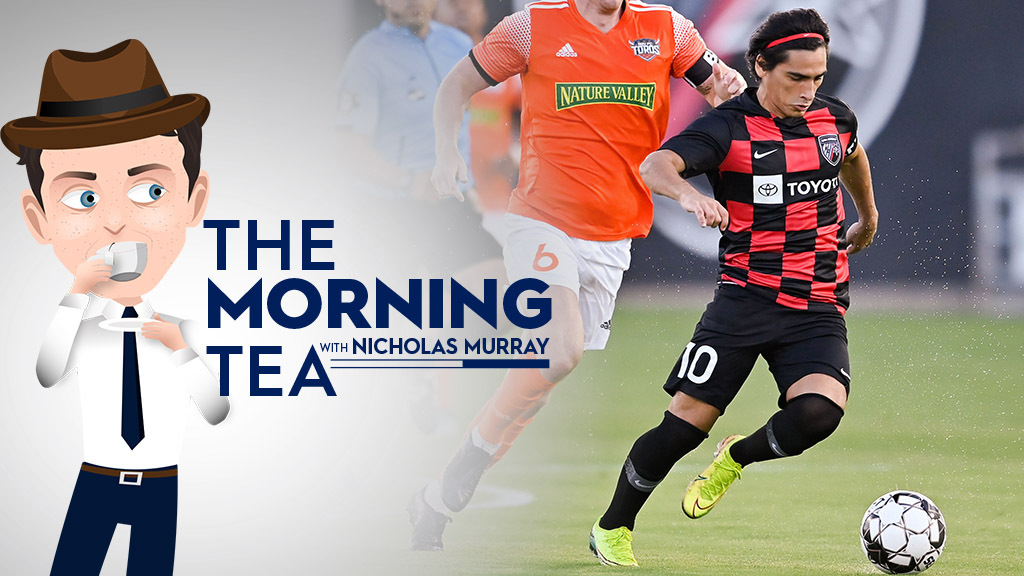 The 2019 Championship Young Player of the Year is adding to his on- and off-field skills, plus a must-read on the first anniversary of a tragedy in El Paso and more from around the league. Here's your Morning Tea for Tuesday.

Arriving in a new country with both a new language and a new league to learn, there was good reason for Cristian Parano’s slow first half to the 2019 USL Championship season with San Antonio FC. It took the Argentine 16 games to register either a goal or an assist in the club’s first campaign but then took off, finishing the year with seven goals, six assists as the Championship’s Young Player of the Year award for his trophy case.

Three games into his second season, it looks as though the 20-year-old is more than ready to not only pick up where he left off, but improve even further while helping carry San Antonio to its first playoff trip since the 2017 season. With two goals and one assist – including a Goal of the Week candidate against Austin Bold FC on Saturday night – Parano is looking like the No. 10 every team would love to have.

“We see progression within Cristian on a day-to-day basis, and this is what’s extremely exciting for any coach,” Marcina told the San Antonio News-Express’ Greg Luca. “He’s been performing both with and without the ball, and it will only get better from here.”

And it’s not just on the field where Parano is starting to gain more confidence. According to Duca, he also spent time during the season suspension – which also saw him rehab from minor surgery on his meniscus in preseason – working on his English.

After learning the basics for on-the-field communication after his initial arrival at the club, Parano has impressed his teammates with how far his second language skills have come.

That willingness to take on challenges is epitomized by the decision the youngster took to make the jump to the United States from Argentina to find a new pathway for his career. The success and recognition – which also included being named the No. 2 player in the USL 20 Under 20 a year ago – he has earned since then has more than validated his move, and opened up new potential paths for his future.

What that future holds, Parano isn’t concerned about for now, though. There’s much more to be achieved in his current home.

“I’m extremely comfortable and extremely happy here,” Parano told Luca. “I really love this country, and it’s been great to me. If I’m being completely honest, I’m not thinking too far ahead about where I’ll be in the future. All of my focus is here in San Antonio.”

A fantastic and well-deserved accomplishment pic.twitter.com/0YpEfRtrGP

It's been exactly 5 months.
At a game in person
With others...
Feels so good@hfdathletic pic.twitter.com/k3JRSaHOZo

- It’s been one year since tragedy struck the El Paso community in a shooting that claimed 23 lives. In the days that followed, El Paso Locomotive FC and its players stepped up to help the community heal. KTSM’s Colin Deaver spoke with some of El Paso’s most prominent sports figures about what it meant to take the lead in bringing El Paso together.

- Three more games have been added to the national television slate for the Championship on ESPN Deportes in August, with Memphis 901 FC's clash against North Carolina FC kicking off the action this Saturday evening at AutoZone Park in a big Group G matchup.

- Are the Tacoma Defiance for real? We got more evidence that they might on Monday night after a 4-0 victory against the Portland Timbers 2 at Providence Park. Alec Diaz now has four goals in three games after the break and the Defiance are back into second place in Group A, making things much more interesting than we'd anticipated when the groups were announced prior to the Championship's return to play.

- Starting on Wednesday night, the Charlotte Independence will begin a stretch of four games in 11 days against Birmingham Legion FC. With only one game under their belts so far, Independence Head Coach Mike Jeffries told the Charlotte Post's Ashley Mahoney he is hoping the team can sharpen its game while keeping everyone as close to fully fit as possible as it looks to remain in position for a playoff berth over the upcoming stretch.

- Colorado Springs Switchbacks FC forward Austin Dewing has held the core elements of his time as a standout on the field for the Air Force Academy with him as he makes the move to the professional ranks. The Colorado Springs Gazette’s Vinny Benedetto caught up with the young forward.

- OKC Energy FC slid out of the playoff places in Group D on Saturday night after suffering a 3-0 defeat to New Mexico United where the club was left to rue its own mistakes. The Oklahoman’s Derek Parker has more on how the team plans to get things moving in the right direction.

- Tampa Bay Rowdies forward Sebastian Guenzatti had reason to celebrate on Friday night beyond his side’s 2-0 victory against the Charleston Battery. The veteran forward celebrated the third anniversary of signing with the club with his third goal of the season at Al Lang Stadium.