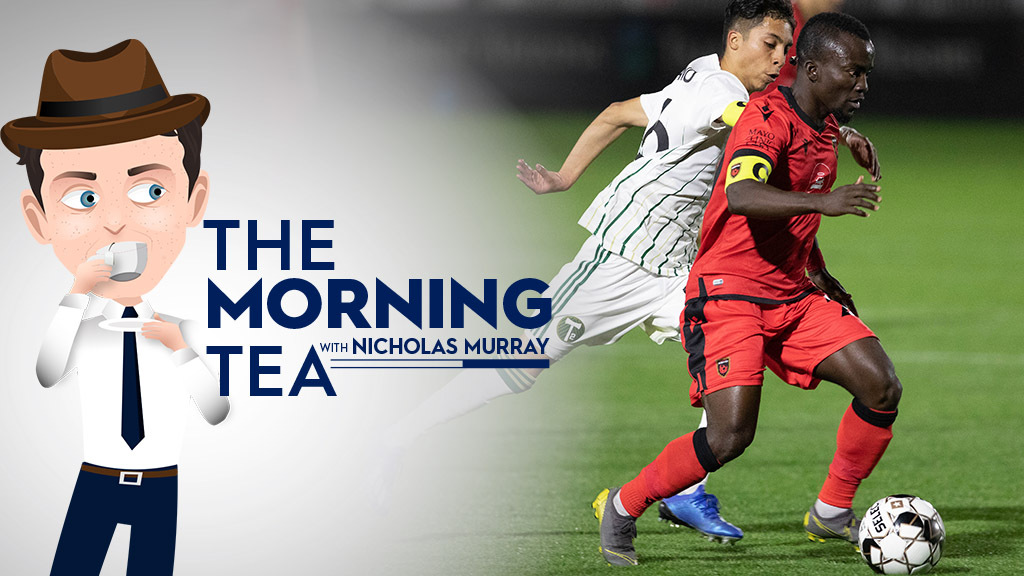 On the face of it, there was nothing that abnormal about Phoenix Rising FC suffering its first loss of the season this past Saturday against Orange County SC. Although Championship Soccer Stadium was the venue for the biggest win in Rising FC’s history in the Western Conference Final of the 2018 USL Championship Playoffs, during the regular season since the start of the 2017 season Rising FC has failed to claim victory there in six visits (0-2-4).

What was different about this result, however, was the manner in which it went down. Not only did the team suffer Santi Moar’s red card just before halftime, but an attack that had seemed ready to pick up where it left off last season when it returned with a 4-0 win against the LA Galaxy II a couple of weeks ago seemed off.

How off? Well, the last time Phoenix recorded only one shot on goal in a regular season game, you’d have to go all the way back to a 1-0 defeat to San Antonio FC on May 20, 2017.

But, if Solomon Asante has anything to say about it, it won’t happen again. According to Head Coach Rick Schantz in his weekly call with reporters, Asante looked to refocus his teammates as they prepared to make the trip home.

“They got on the bus and he said, ‘we can’t wait’”, said Schantz. “‘We can’t wait for something to happen in our career, we can’t wait for something positive to happen to us. You have to do it now and you have to go and get it.’ I think that was great for the players to hear. Our captain said, guys, it’s not just going to magically happen, we have to go get it, and it doesn’t matter whether its fans or not, bad field or not, we have to do it ourselves.”

There’s been no question the impact that Asante has had on the field for Rising FC since his arrival before the 2018 season. The reigning Championship Most Valuable Player has not only been one of the most durable players in the league – his 68 regular-season appearances are only surpassed by five players – but his 38 goals are second over that span while his 28 assists are the most in the league.

That leaves us to see how Rising FC will react when they get another strong test on Saturday night from an El Paso Locomotive FC side that itself is looking for a positive reaction to defeat when it visits Casino Arizona Field. With the desert heat and lack of live fans in the stands for inspiration, it’s going to be incumbent on the hosts to go out and grab the game the way they know how.

“These are the dog days of summer here in Phoenix,” said Schantz. “It’s hot and tiring and miserable, and if it’s 0-0 or you’re in a difficult match and you can’t look into fans and dig down deep for those people who are screaming for you or throwing beer at each other, really enjoying themselves, it really becomes … you have to remember why we play the game and that love of the game has to carry you through.”

As @ussoccerfndn completes their 300th mini-pitch, we’re proud to have played a part in their journey to 1000 along with our amazing partners!

With courts 17 & 18 about to open in #1OKC, there isn’t a pro club in the United States with more in their home city!#ForCityAndClub pic.twitter.com/i7yAYXV7Uo

Every time I step on the field, people will know what I stand for......

The cleats and the message speaks for itself. Change is happening and keep the conversation going!

Great to see the @USLChampionship’s return-to-play model on the @dpshow!

And special thanks to Hartford Athletic supporter @HiMyNameIsSeton for making it happen. pic.twitter.com/lHcyia4LvW

- There have been some notable 18-year-olds debut in goal in the USL Championship in recent seasons, and now you might be able to add Sporting Kansas City II’s Brooks Thompson to the list. Find out more about the Indiana native who’s recorded 10 saves over his first two starts for the club from the News and Tribune’s Josh Cook.

- New Mexico United believes it may be clicking into gear after putting in a strong performance against El Paso Locomotive FC last week to move to the top of Group C. Head Coach Troy Lesesne's side face a trip to OKC Energy FC on Saturday night in a big interdivision matchup next.

- Jose Baxter's path to Memphis 901 FC wasn't always a smooth one. The talented midfielder spoke about his journey from the Premier League with Everton to the heart of Tennessee with the Memphis Commercial Appeal's Corinne Kennedy.

- As much as you can plan for him, there's not much stopping Indy Eleven's Tyler Pasher right now. The current USL Championship scoring leader notched his sixth goal of the season in a 4-1 victory that ended Hartford Athletic's perfect start to the season on Wednesday night at Lucas Oil Stadium.

- Things looked to be going well for Miami FC in its return to action on Wednesday night, but then Atlanta United 2 ramped up for three second-half goals and a 4-3 victory at Fifth Third Bank Stadium, its first of the season.

- The pressure rose significantly on Louisville City FC after a 2-1 defeat against Sporting Kansas City II on Wednesday night. Here's what Head Coach John Hackworth had to say after a third defeat in four games at new home Lynn Family Stadium.

- Haitian international Christiano Francois scored twice, and Foster Langsdorf scored the inevitable goal against his former club as Reno 1868 FC got its first win since the resumption with a 4-1 victory against the Portland Timbers 2. The win moved Reno back on top of Group A with a game in hand on both Sacramento Republic FC and the Tacoma Defiance.