TAMPA, Fla. – The USL Championship announced on Tuesday that New York Red Bulls II midfielder Deri Corfe had been voted the Championship’s Player of the Week for Week 5 of the 2020 season.

The 2019 USL League Two Most Valuable Player for the Ocean City Nor’easters, Corfe helped get the Red Bulls II back on track with its first two victories of the 2020 season. The 22-year-old recorded a goal and assist in New York’s 5-1 victory against the Philadelphia Union II and then notched a stoppage-time winner against Pittsburgh Riverhounds SC on Sunday evening.

Corfe earned 60 percent of the ballot for his pair of performances. New Mexico United’s Devon Sandoval finished second on 20 percent after recording a goal and assist in United’s 2-1 victory against El Paso Locomotive FC on Friday night. 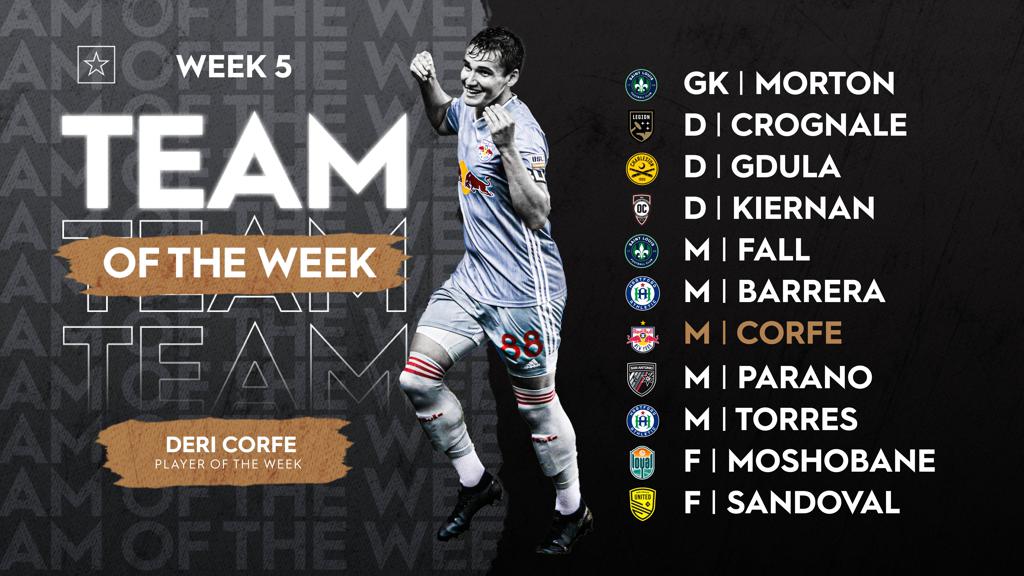 M – Danny Barrera, Hartford Athletic: Barrera recorded three assists and five key passes overall to lead the Athletic to a pair of victories against Loudoun United FC and the Philadelphia Union II, continuing their perfect start to the 2020 season.

M – Deri Corfe, New York Red Bulls II: Corfe scored two goals and one assist, including a stoppage-time winner from the penalty spot on Sunday against Pittsburgh Riverhounds SC as New York swept to a pair of victories.

M – Cristian Parano, San Antonio FC: Parano notched the assist on SAFC’s game-winner, completed 33 of 39 passes overall and made four key passes to lead his side in a 1-0 victory against Rio Grande Valley FC.

M – Gabriel Torres, Hartford Athletic: Torres played an important role in both of Hartford’s wins over the week, recording a goal, an assist and six key passes as the Athletic remained perfect through three games.

F – Devon Sandoval, New Mexico United: Sandoval recorded a goal and assist, and won 7 of 12 duels as United took a 2-1 victory on the road against El Paso Locomotive FC to move to the top of Group C.