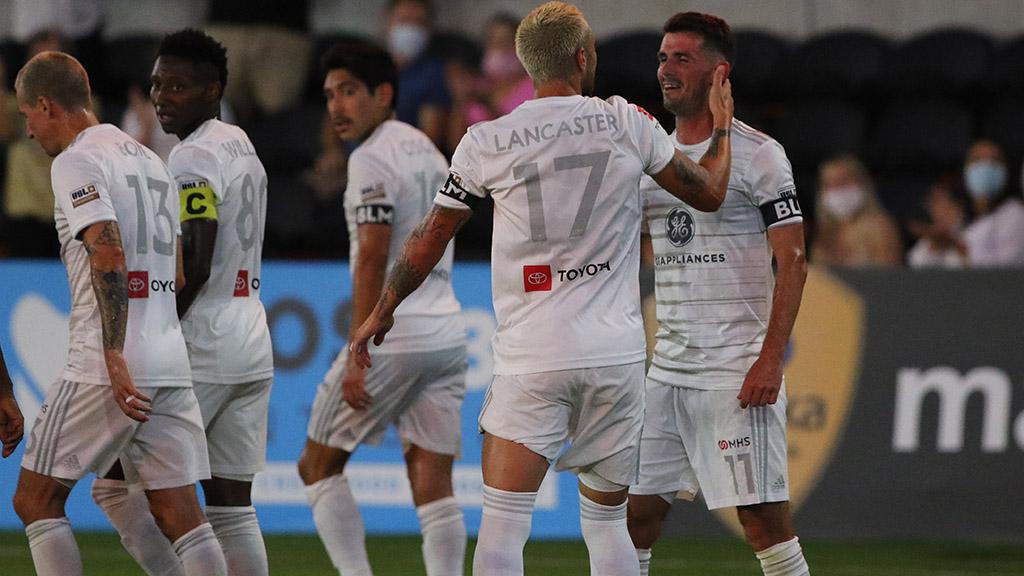 And while a 1-0 victory against Sporting Kansas City II might not have been the same magical ending LouCity players, coaches and fans might have been dreaming of two weeks earlier, it was at least an end to the feeling of pressure that had started to build over the time in-between.

“We needed to come out and have a response from our last two matches and specifically do it here in this building,” said Head Coach John Hackworth on Saturday night. “I thought the team had some good moments in that game and played some excellent soccer. Particularly I was pleased with coming out of halftime and the adjustments that were made. I really thought the guys put them under pressure early and obviously getting the goal [was important].”

A first win, and a first goal for Cameron Lancaster in the building LouCity will call home for decades to come certainly should take the weight of some shoulders around the club. It will break the ice and could lead to a more relaxed feeling in Louisville’s locker room as the two teams prepare for a rematch on Wednesday night.

Not that LouCity is going to take anything for granted after the flashes that SKC II showed once again on Saturday night.

“There are no easy games, and they’re a great young team with some brilliant players, so it won’t be easy for us for sure,” said LouCity’s Niall McCabe. “With a quick turnaround we will have to use the squad and I’m sure they will as well. We had a couple of guys go down with knocks and stuff like that, so we will do our best to manage that with the quick turnaround and see where we can go Wednesday.” 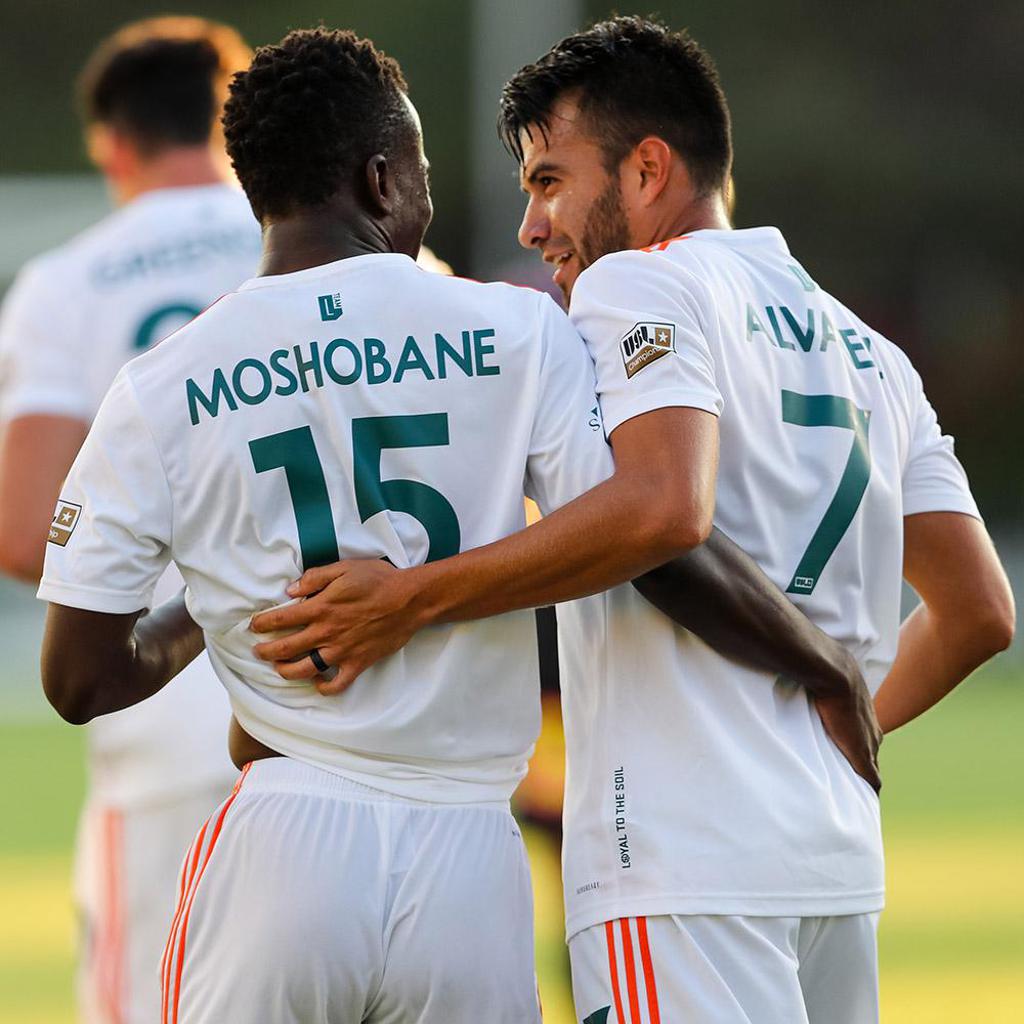 Louisville’s first home win wasn’t the only notable one over the past weekend. There was San Diego Loyal SC, perfect on the road to start its inaugural season but somehow more muted at Torero Stadium in its first two games on home turf. A goal by Irvin Parra and fine performance by Tumi Moshobane lifted Head Coach Landon Donovan’s side not only to its first win at home, but also to the top of Group B in what is shaping up to be a compelling playoff race out west.

“Tumi's played really well for the last two weeks and really wanted to reward himself with a great performance,” Donovan said. “He made a great play on the side here to get off a cross and also, Irvin, probably in the last three weeks has been incredible teammate. He’s really helped this team out and we're all very happy for him because he deserved to score.

“It was a great finish and a big, big, three points for us.”

Then there was the Charleston Battery, whose new home at the Patriot’s Point Soccer Complex has already been festively decorated by The Regiment and other supporters but saw the side fall in its debut just over a week ago. Friday night’s 3-0 win against Atlanta United 2 was comprehensive, however, and gave the side a positive feeling to build on as it makes its new home its own.

“It’s awesome. It really is,” said Battery Head Coach Mike Anhaeuser, who picked up regular season win No. 113 in the Championship in the process. “I always say the first win is the hardest one. Because now, you have it under your belt. If things didn’t go our way tonight, then that pressure’s coming. Now we’ve got a great win, 3-0, the guys played great. … Great result. Great three points for us and it’s great to get that first three points at Patriots Point.” 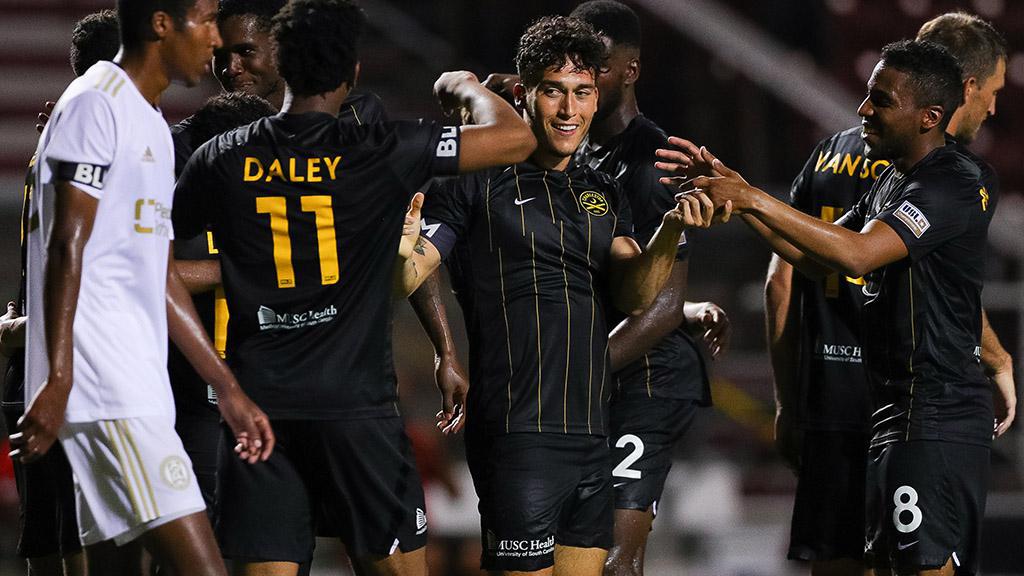 In a league where establishing your home as a fortress to be feared is central to playoff contention, the trio of LouCity, SD Loyal and the Battery took a big step forward in that aim over the past three days.

“We know the first two games hadn’t been good enough at all here, and this club is used to winning and winning the right way – with hard work and good football and all those attributes that we’ve shown over the last five years,” said McCabe. “We really wanted to make it right — get a win for us, the fans and everyone involved who put in hard work and give us something to build on.”