THE MORNING TEA – Blackwood Coming Into his Own in Saint Louis

How Memphis 901 FC safely welcomed fans back to AutoZone Park; Miami FC gets set for return to action 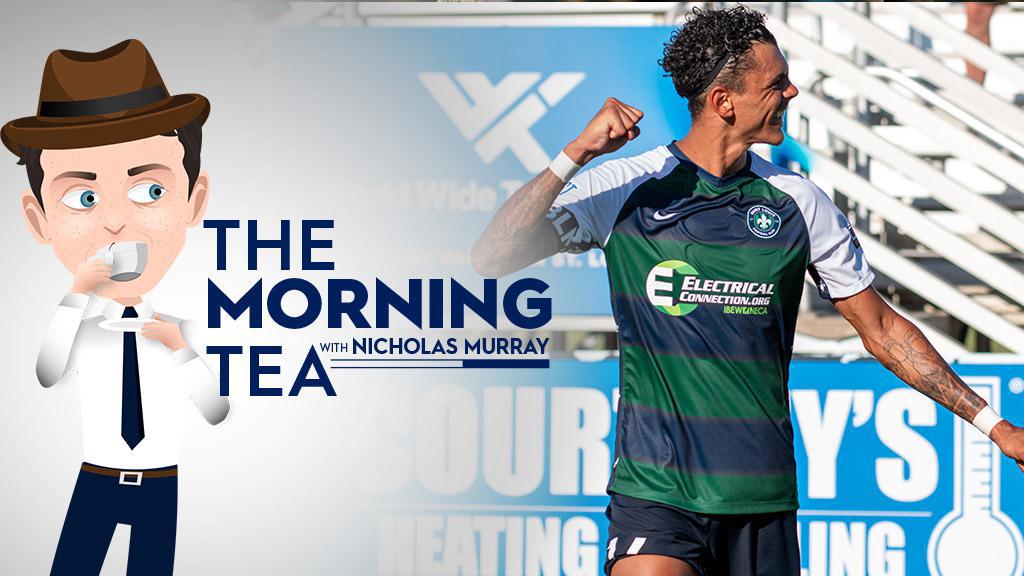 Tyler Blackwood has scored nine goals in 17 appearances since arriving at the club midway through the 2019 season, and has created a strong connection with the club's fans as well. | Photo courtesy Saint Louis FC

A new hero is rising in Saint Louis, plus catch up on news from across the Championship ahead of a busy start to the week on Wednesday.

Since he arrived in the Championship in Phoenix back in 2016, Tyler Blackwood has always been a player that you could count on to produce some important goals over the course of a season. During stints with Rising FC, Sacramento Republic FC and Sporting Kansas City II, he became a reliable piece for a club’s attacking puzzle, if not a game-in and game-out starter.

Since his acquisition from Republic FC by Saint Louis FC midway through the 2019 season, though, the English forward has found another gear, and maybe a permanent home.

Blackwood recorded his ninth regular season goal in Saint Louis’ colors on Sunday in the club’s 1-0 victory that handed Indy Eleven its first loss of the season, and kept STLFC in the middle of the race for the playoffs in Group E in the Championship. Those nine goals are now the most Blackwood has scored for a single Championship side – surpassing his eight tallies for Phoenix – and have come at a rate of a goal every 137.6 minutes.

It's no wonder Blackwood is feeling good about where his game is right now.

“Before we started, I told the guys that I expected a goal,” Blackwood told reporters after the game. “I feel like I’m going to score in every game; I’m playing with that kind of confidence right now. I’m thankful that I got the chance and even more thankful that it ended up to be the game winner.”

There are still areas where STLFC is going to need to improve if it’s going to beat out one of Indy Eleven or Louisville City FC to secure one of the playoffs places in Group E. One of those is finding ways to create more chances for Blackwood and his fellow forwards to convert, where STLFC is in the middle of the pack so far this season.

Another is lightening the workload for goalkeeper Kyle Morton, whose 20 saves are currently the most in the Championship, while the side overall is allowing 16 shots per game and 5.75 shots on goal per game.

But the enduring image on Sunday evening was late in the game. Replaced by a late substitution, Blackwood departed the field near the St. Louligan’s corner section, and then lingered there, waiting for the final whistle. When it blew, he turned and gave a fist-pump to the socially-distanced fans in the stand, a sign of the connection he’s quickly developed with the fans in his current home.

- This past weekend was an important one for Louisville City FC, San Diego Loyal SC and the Charleston Battery, each of whom claimed their first victories at their new homes. In a league where making your home a fortress is key to reaching the postseason, the victories on Friday and Saturday night will go a long way to settling each club.

- Memphis 901 FC played to a 2-2 draw against the Charlotte Independence on Saturday night, but also showed how through good preparation a club can responsibly welcome fans back to venues. The Daily Memphian’s Geoff Calkins has more from AutoZone Park.

- Louisville City FC added some more firepower to its attack on Monday with the arrival of former Phoenix Rising FC forward Jason Johnson. The Jamaican international has scored 28 goals in the Championship over 104 games in his career.

- Off to a great start to the season with three wins from three games, Hartford Athletic is part of one of Wednesday night's big games as it visits Indy Eleven at Lucas Oil Stadium. As the team heads for one of its out-of-division contests, it does so confident the strict protocols in place to ensure player safety will allow it to do so securely.

- The Miami FC will be back in action for the first time since the resumption of play on Wednesday night against Atlanta United 2. Head Coach Nelson Vargas and playmaker Sebastian Velasquez talked about the road ahead for the club as it returns to play with the Magic City Soccer podcast on Monday.

- If you're looking for an illustration of how important every game is in this shortened season, just look at Sacramento Republic FC's loss away to the LA Galaxy II on Saturday night. Instead of extending its lead at the top of Group A with a win against Los Dos, Republic FC is now heading to face Orange County SC on Wednesday with Reno 1868 FC still within touching distance and with two games in hand as it faces the Portland Timbers 2.

- Kembo Kibato's professional path took him from Toronto FC's Academy systemt to Denmark and FC Helsingør a year ago. Now the young midfielder is looking to notch his own breakout season with Rio Grande Valley FC, as he told the Beautiful Game Network's Carson Merk.

- The interdivision clash between New Mexico United and Phoenix Rising FC scheduled for Saturday, August 8 that we all had circled when the schedule came out will now be played at Casino Arizona Field. The change in venue is a result of the current public health order in New Mexico, which had previously seen United's home opener against Real Monarchs SLC be rescheduled to later in the season.

- Atlanta United 2 Head Coach Stephen Glass has been given a temporary bump up in responsibility at the club. After last week's departure of Frank de Boer from Atlanta United FC, Glass has been appointed as his interim replacement while the club searches for a new manager. Tony Annan will take the reins for ATL UTD 2 for the time being.