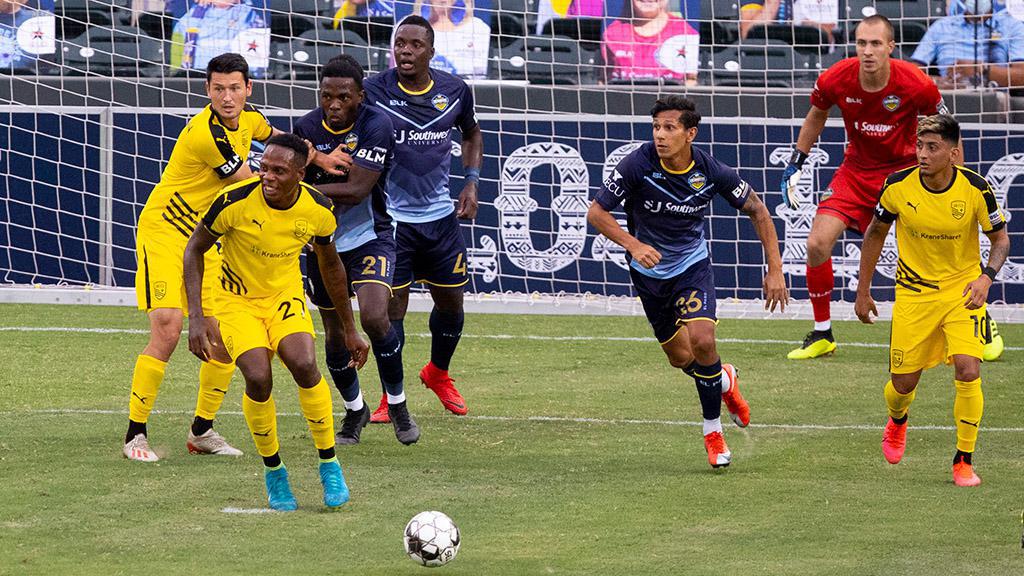 ALBUQUERQUE, N.M. – The contrasts in approach between El Paso Locomotive FC and New Mexico United have meant prior meetings between the clubs lived up to the old boxing phrase: Styles Make Fights.

Certainly, the vast tactical differences between New Mexico’s high-pressing style and El Paso’s dedication to playing its way out of the back has been compelling to watch, including their most recent meeting which ended in a 2-2 draw.

From United’s outstanding opening to the contest, which saw the visitors force turnovers that not only led to Chris Wehan’s early goal but numerous other chances in the opening half-hour, to El Paso gradually finding its range both in open play and off set pieces to take a halftime lead before another good turnover of possession led to New Mexico’s equalizer in the second half, the ebbs and flows of the contest provided plenty of drama.

And as the sides get ready to square off again on Friday night, don’t expect any of that to change.

“They have a distinct style of play and we have a distinct style of play,” said United Head Coach Troy Lesesne on Wednesday. “We’ve played El Paso a number of times, they’ve played us a number of times, and I think both philosophies, we’re going to continue to stick to try to do what we do best. We always want to take the initiative high up the field when we can.”

The contrast in styles is borne out by the numbers. In the 2019 season, New Mexico United ranked ninth in the league in passes attempted in the opposing half (8,105) and won possession 137 times in the opposition’s attacking third, putting it above league average. By contrast, Locomotive FC’s style saw it complete more passes (14,395) than any team in the Championship but rank 30th in passes attempted in the opponents’ half (6,822).

“They like to play,” said New Mexico midfielder Andrew Tinari, who brought experience with the pressing style United plays from his time in the New York Red Bulls organization. “The last game we’ve obviously had a high press, the first 30 minutes we did it pretty well, and that’s kind of our game plan. We know they like to play and we’re going to put them under as much pressure as possible and hopefully convert off that. So, obviously with that we’re vulnerable to opportunities for them to break us down, but we know to come back and get compact and that will allow us to be successful.”

United’s style can also make for some high-pressure situations on its own back line for players like Austin Yearwood. The entertainment value it brings, though, is something the defensive veteran can also appreciate.

“I definitely think our contrast in styles makes for a pretty heated match, and a good one,” Yearwood said. “We’re going to try to press and they’re going to try and play it out of the back, we’re both dedicated to our styles of play and forcing our style on the opponent. It does make for some pretty good football.”

With first place in Group C once again on the line with Locomotive FC sitting one point ahead of United in the standings, it should make for another compelling clash on Friday night.

“The commitment to the press in the first 30 minutes as we’ve all alluded to and having those moments where we can win the ball high up the field is fantastic,” said Lesesne. “I think we’ve improved in that area from last year, we’re more committed to it and more clear about what our roles and responsibilities are.

“If El Paso chooses to play that way – and I assume they will – then we’re going to continue to choose to press and stay high up the field. That’s our philosophy, that’s our style of play.”