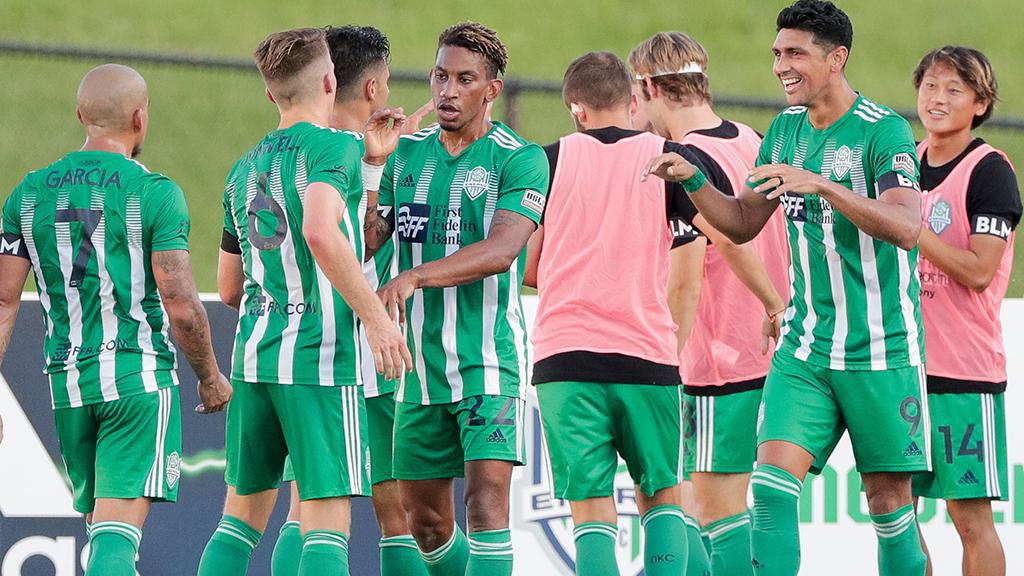 OKLAHOMA CITY – As competitive as Group D in the Championship’s reconfigured competition structure for 2020 appeared on paper, getting out to a positive start was always going to be imperative for OKC Energy FC.

Thanks to last Friday night’s 3-1 victory on the road against Austin Bold FC, the Greens have accomplished just that, and now sit on top of the group standings with four points from three games. But in addition to getting out of the blocks nicely upon the club’s return to play, Head Coach John Pascarella has also completed another objective he had for the side’s first week of action back.

“When you look at the first two games and how we handled them, we were able to use pretty much the whole roster, play both systems we like to play,” said Pascarella on Monday. “We got four out of six points which was our goal. I’m very pleased with how the team has performed up to this point.”

The only element of Energy FC’s lineup which remained somewhat intact over the opening two games of the season resumption was the defensive line. Goalkeeper CJ Cochran lined up behind the quartet of Kyle Hyland, Atiba Harris, Nicolas Taravel and Zach Ellis-Hayden against both FC Tulsa and Bold FC.

But aside from Jaime Chavez’s presence leading the attacking line, everything else between the two contests changed. There was a change of formation, with Christian Ibeagha dropping to the bench as OKC went with a flat back four instead of three center backs, and a completely revamped midfield that brought in Cordell Cato and Jonathan Brown on the wings and Ray Saari and Charlie Ward to the center of the park.

The decision to play Brown paid off, with the Welsh winger scoring the opening goal after making a good run anticipating a flicked header by Chavez into space in the first half. The chemistry the side showed while using 20 of its 22 outfield players in both contests was in Energy FC’s minds a positive sign to build on.

“We’ve got a squad all the way through and we’re pretty flexible in terms of systems we can play,” said Brown. “You’ve seen that already in the first two games since the restart.”

“It’s huge,” added Pascarella. “With the way the schedule is laid out, the teams that have a deep roster will be the ones picking up the most points.”

Energy FC returns to Taft Stadium on Wednesday night looking to add another three points to its total when it plays host to Rio Grande Valley FC. Adding a first home win of the season to its victory in Austin would be another positive sign for OKC under new Head Coach Pascarella, with the side having claimed back-to-back wins only twice in a 2019 season that saw them miss out on the postseason.

Brown is feeling good about his side’s chances, but also is wary of the energy the Toros will bring after a strong performance of their own over the weekend.

“They’re a good side, and now they are going to be buzzing a bit after getting that late equalizer last night [against San Antonio],” said Brown. “We’re confident though, and we have to focus on ourselves after coming off the victory against Austin. Hopefully we can take that going into Wednesday night.”