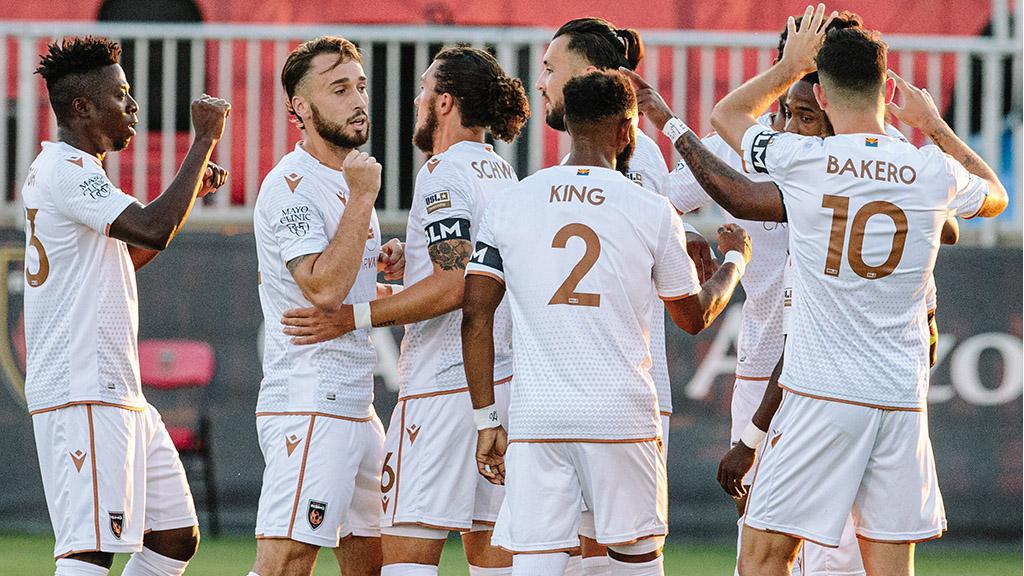 After earning victory against the LA Galaxy II on Saturday, Phoenix Rising FC has the chance to put distance between itself and Orange County SC on Thursday night in a clash on ESPN2. | Photo courtesy Grace Stufkosky / Phoenix Rising FC

PHOENIX – There might only have been two games so far in Phoenix Rising FC’s 2020 season, but the reformatted competition structure that has placed the side alongside four regional rivals – including Thursday-night opponent Orange County SC – means there’s already a sense of urgency.

And with San Diego Loyal SC having picked up seven points from its opening three games in addition to Rising FC’s two wins from two, Phoenix Head Coach Rick Schantz believes the rematch of the 2018 Western Conference Final on ESPN2 will have Orange County under pressure to not fall further behind in Group B.

“These are six-point matches now,” said Schantz this week. “When you’re playing everyone in this group format, so many times I can hurt them as well as gain points on other teams, so for them, it’s huge. I’ve thought about it, and I’ve told the staff, if we can get this first one it puts us eight points ahead of them, and we’d only have [13] games left, so we’re talking about the final third of a season here and getting 11 points clear with 11 or 10 games to play, it makes things very difficult for Orange County, so I do think they have some pressure.”

“I love [OCSC Head Coach Braeden Cloutier] a lot. He’s a smart guy, intense, and I’m sure he’s told their guys this is a big match for them.” 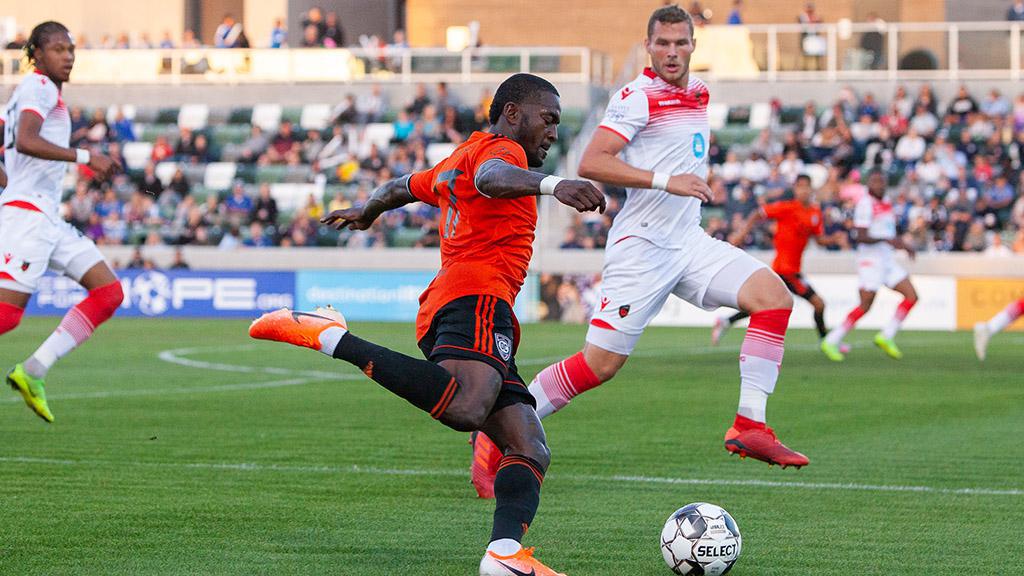 Orange County SC and Phoenix Rising FC were both considered major playoff contenders in the Championship in preseason, but the new format of the season has narrowed the path to the postseason. | Photo courtesy Liza Rosales / Orange County SC

If Rising FC is going to apply that pressure to Orange County – against which it plays its next two games with a second meeting arriving on July 27 – Schantz believes his side is going to need to be better than in its 4-0 win against the LA Galaxy II on Saturday night. In sweltering mid-summer conditions in Arizona, Schantz wasn’t as concerned by the fitness his side showed while seeing out the game in the second half with a three-goal halftime lead, but in the lack of sharpness on the ball early in the game.

It’s the sort of play that, if repeated, could easily be seized upon by Orange County’s talented group of midfielders and attackers.

“I wasn’t as much concerned about the fitness as I was the way we started the match and how many turnovers we had in midfield,” said Schantz. “I think we got a little bit fortunate in the sense that with the Galaxy II missing some guys that actually played [at the MLS is Back Tournament on Monday night], we benefited that their wing play wasn’t as dangerous.

“I’ve told them, and I kinda was kind on them yesterday in film, that that performance is not going to win at Orange County, and that we have to improve.”

Orange County will be seeing its first action since the league resumed play on Thursday night, which is another factor that Schantz believes could give both sides some form of edge. With Rising FC having gone through the new gameday routine implemented under the USL’s Health and Wellness protocols, including the playing of the national anthem during which both teams took a knee in solidarity with protests occurring around the United States against systemic racial inequality.

Schantz also believes after Saturday’s conditions, his players are looking forward to playing in what should be slightly more pleasant temperatures, even if OCSC will likely have fresher legs going in.

“The advantage that we played in possibly the worst conditions on planet earth and going into Orange County, I think emotionally and mentally the guys are super-excited,” said Schantz. “But, they’re going to be fresh and ready to go and be excited to play, so it’s a tough one. I’m an optimistic coach, and I like to look at the positives, but I’d be remiss if I didn’t think about the difficulties we face going in there.”