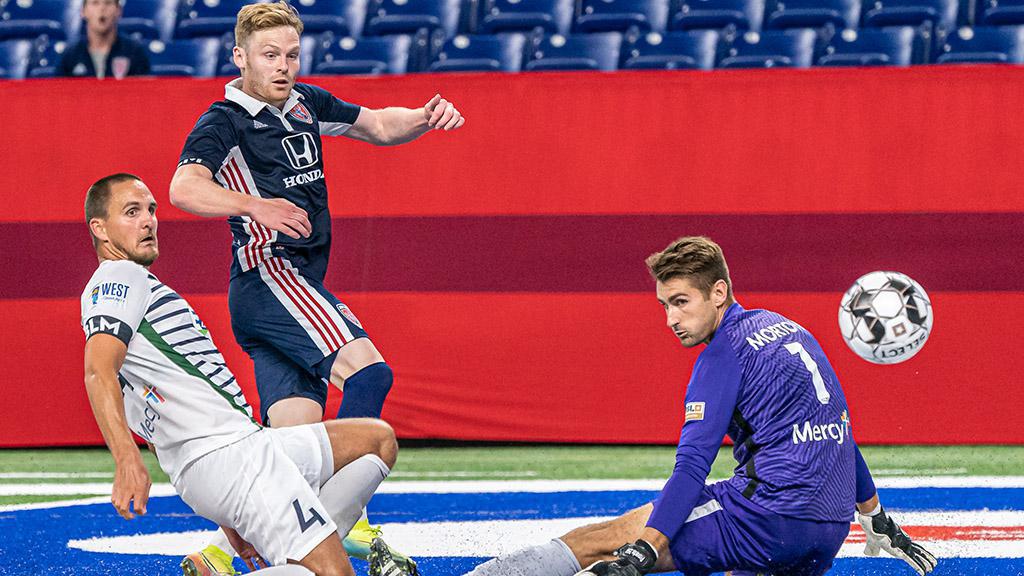 INDIANAPOLIS – For opposing defenders, when it comes to Indy Eleven’s Tyler Pasher you’ve got to pick your poison.

But whatever you choose, the chances are at the moment you’re going to end up picking the ball out of your own net.

“If the opponent’s back line is high he can get in behind them, and if they drop deep he can come short and get the ball and turn and go, so he’s just a big threat either way and it’s so hard to defend that,” said Indy Head Coach Martin Rennie after Pasher’s opening goal paved the way to a 2-0 victory against Saint Louis FC on Saturday night at Lucas Oil Stadium.

“Usually you’ll find there’s players with speed who don’t really have the control and ability to stop and turn, but he’s got the ability to do all that.”

Pasher was one of the breakout performers in the 2019 Championship season. He led the Eleven in scoring as it reached the Eastern Conference Final of the USL Championship Playoffs, making the move to forward for the first time after playing previously in wider roles.

The creativity his former role has been in full evidence since the switch, with his third goal of the season a great example. Picked out by an angled pass toward the left side of the penalty area by Andrew Carleton, the Canadian squared up Saint Louis defender Sam Fink, created a yard of space with a stepover that put the ball on his favored left foot and squeezed home a low finish.

Finding pockets of space to utilize his speed – whether tracking down balls in behind defenses or picking up possession in midfield and turning on the jets – has been a hallmark of how Pasher has become one of the biggest open-field threats in the Championship. See his opening goal against Memphis 901 FC, where he picked up possession at the halfway line in transition and powered forward to produce a remarkable solo finish.

It’s a headache that STLFC tried to counter by adding help whenever possible to try and pin Pasher in. Even with those efforts, he still hit the post once, and registered nine shots overall – one fewer than the visitors managed over the 90 minutes.

“It’s been amazing to see his development over the last couple of seasons,” said Rennie. “You have to remember that he’s only been playing the position he’s in for one season. He’s doing fantastic at it and I think he can keep enjoying it and keep improving at it, and I think he will.”