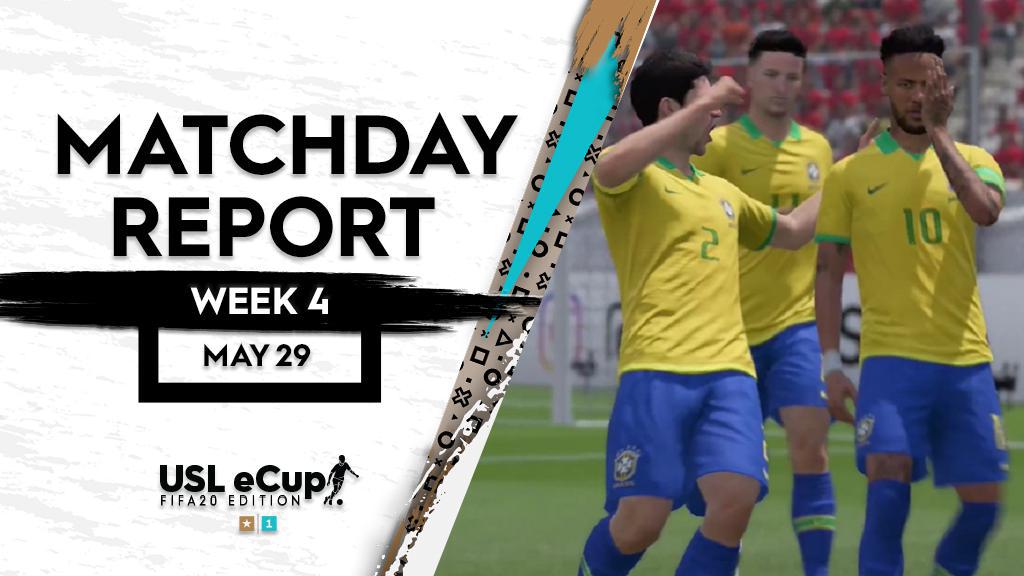 Rio Grande Valley FC extended its lead at the top of the USL eCup: FIFA20 Edition’s overall standings with its third bracket victory of the week, while the New England Revolution II took victory in Division B and Philadelphia Union II in Division C to wrap up the fourth week of action in the online event.

1. Two weeks ago, Rio Grande Valley FC was outmaneuvered in extra time by the New York Red Bulls II to fall in the Division A Final. On Friday night, the Toros got their revenge as the talent wielded by Juan Chavez with Brazil came through with a 5-2 victory against the Red Bulls II’s Mike LaBelle and Chile. The victory was a massive step toward the overall title for RGVFC, which now has a 450-point lead over second-place New York in the overall standings, and a 1,300-point lead over third-place Saint Louis FC with two weeks to go. It also gave Chavez a notable victory of his own, as he became the first player to defeat LaBelle in the tournament, with the Red Bulls’ eMLS player having won six in a row prior.

2. Division B’s Final gave us a tight affair, and with only nine shots overall between the New England Revolution II’s John Oliveira and El Paso Locomotive FC’s Alexy Bosetti the game was always going to come down to finishing. The Revolution II may have been held to four shots overall, but once again Oliveira’s quality as an eMLS player came through, seeing him net twice for a 2-1 victory and a spot just outside the top five overall for the club as it returns to Division A next week.

3. The Philadelphia Union II’s Brian Hatfield did what he was supposed to in claiming the Division C bracket on Friday night – when you’ve got the No. 3 team in the tournament, even an average player should beat the No. 29, No. 22 and No. 25 teams – but the 2-0 win against Orange County SC’s Jon Fernandez didn’t inspire much hope that there will be more to come next week in Division B. Philadelphia is, at least, back to even in overall points, after being in the red since the start of Week 3.

- The Charleston Battery’s Rennico Clarke got to end the week on a high note with a 2-1 win as Greece against Sacramento Republic FC’s Juan Barahona and Mexico. That’s not only undone the penalty for relegation from last week but pushed the Battery back into a Top 10 position overall.

- We did feel a bit sorry for Austin Bold FC’s Julien Llerena as he was called out of last week’s eSports retirement to take the controls again as Italy against Union Omaha’s Damia Viader and Norway. But hey, at least this time he scored, albeit in a 6-1 defeat.

- Kidding aside, that was a good finale for Los Buhos as the victory netted Omaha 600 points for the week. The top two might be out of reach at this point, but with a bye to the Division A Quarterfinals next week to look forward to there’s still an outside chance at the top three.