Republic FC in 2014: An Unforgettable Ride 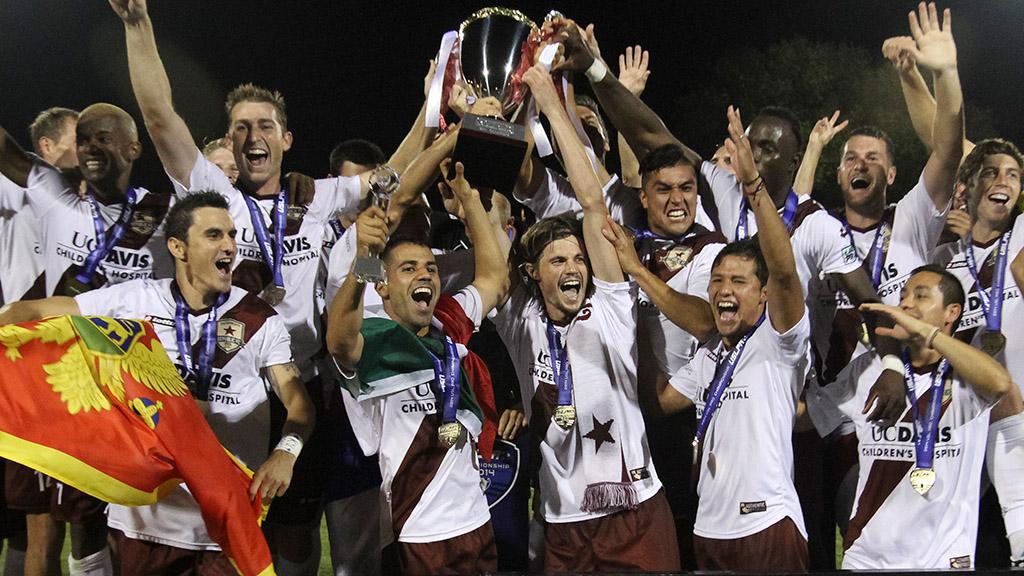 Sacramento Republic FC’s 2014 season in the USL Championship was one of the great stories in the league’s history. Ahead of this Saturday’s re-airing of the 2014 USL Championship Final with perspective from host Rob McCallister and former player Thommy Stewart, we’ve taken a look back at the club’s inaugural campaign, and the significance it still holds for both Republic FC and the Championship.

When Sacramento Republic FC was launched – then without its nickname in December 2012 – it was arriving to a changing soccer landscape in the United States.

Take, for example, the first official win in the club’s history on April 7, 2014.

The side it came against? Chivas USA Reserves.

Republic FC’s journey from there to here, has been a remarkable one. It has brought with it new expectations for what a soccer club can be in the United States, as well as a lifetime of memories for those that experienced it first-hand.

So, back to that first win…

2014 wasn’t just the first for Republic FC, it was also a year that set the stage for the Championship that exists today. As well as playing every team in what was then a 14-team league, USL Championship clubs also took on reserve teams from clubs in Major League Soccer that didn’t hold partnerships with Championship clubs as part of their regular season. As well as their win against the Goats – who would exit MLS at the end of that year – Republic FC also picked up a 4-3 victory against the Colorado Rapids Reserves thanks to an 84th-minute winner by Mike Fucito. 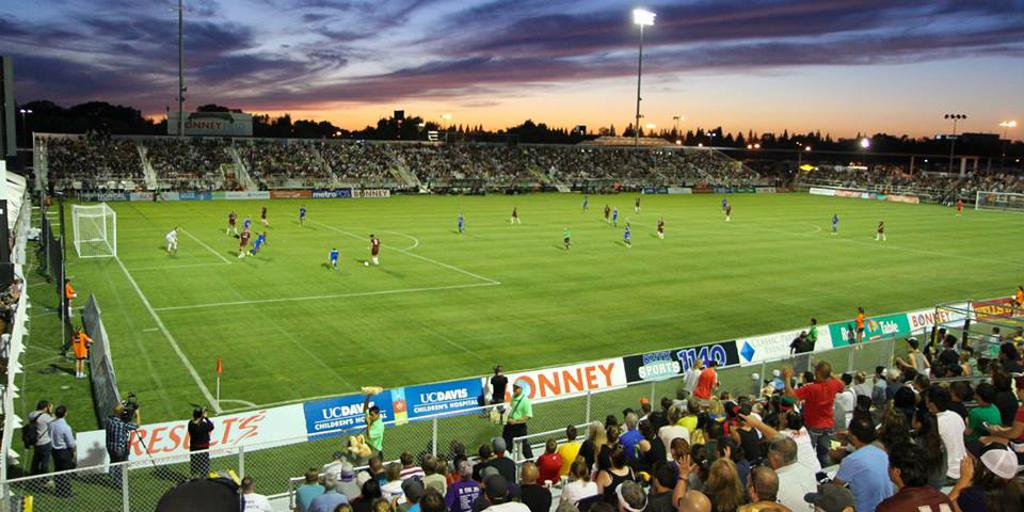 That match, of course, also held additional significance, as it was the first played at what is now known as Papa Murphy’s Park. After the mammoth crowds that had welcomed Republic FC to the city at Hughes Stadium – including three sellouts of 20,231 from four contests, then a Championship regular-season record – the club’s official home was packed to the brim for the rest of the season with 8,000 fans at every game.

And Fucito? Well, he was part of another idiosyncrasy of Republic FC’s first season. At that point, most USL Championship clubs had a partnership with an MLS club. Sacramento? It had two, with both the Portland Timbers and San Jose Earthquakes sending players on loan to be tutored by Head Coach Preki and his staff, while also making valuable contributions to the club’s success.

Fucito’s time was relatively brief, but two players who arrived in Sacramento that season via the two partnerships stood out. From Portland, there was goalkeeper Jake Gleeson, who made 17 appearances for the side and served as the starter throughout the club’s postseason run. From San Jose, there was forward Adam Jahn, who notched seven goals in 20 games, including one during the playoff run. 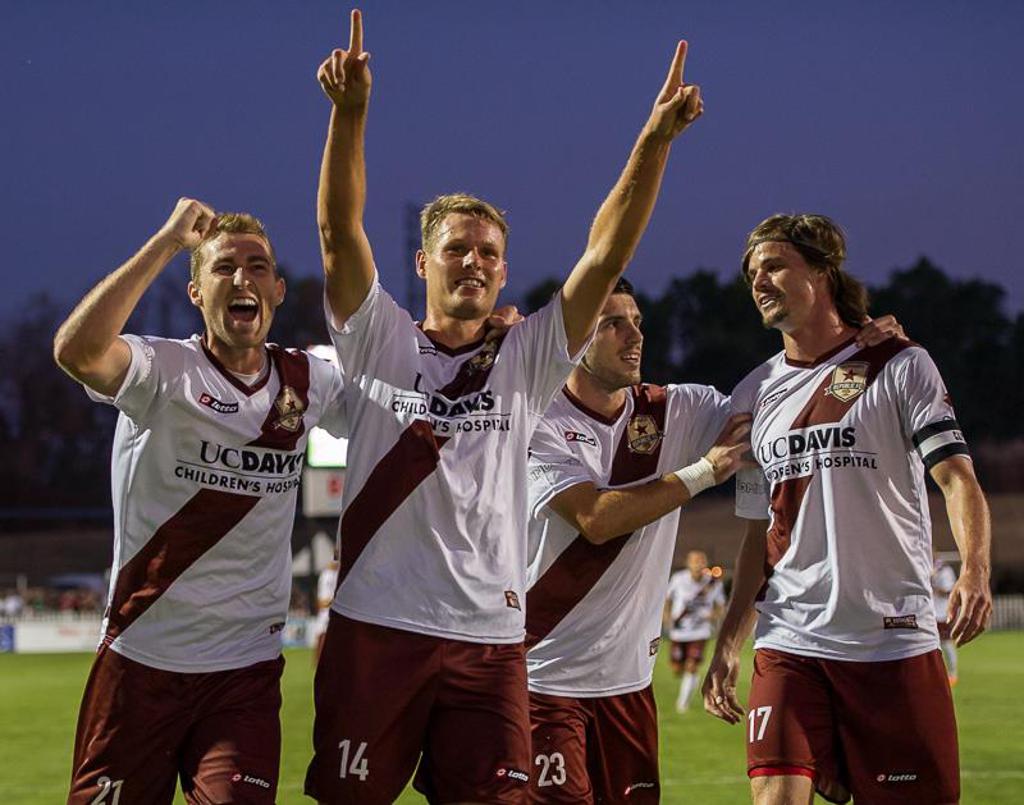 Forward Adam Jahn (center) was one of the notable arrivals on loan to Sacramento during its inaugural season in 2014. | Photo courtesy Dave Hanke / Sacramento Republic FC

Those arrivals bolstered the squad that Technical Director Graham Smith and Preki had already assembled. Smith’s connections – and knowledge of the California soccer scene from his time at USL League Two’s Ventura County Fusion – allowed him to assemble a group that may not have included well-known names at the start of the season, but who would be enjoying a significantly higher profile by the end.

For example, Emrah Klimenta, who before Republic FC had never competed in the professional ranks but quickly became a staple on the back line. Or Harrison Delbridge, part of Smith’s pipeline from the Fusion to Sacramento, who’d make his professional debut for Republic FC before twice earning Championship All-League honors with FC Cincinnati in 2016 and 2017.

There were others, too. The overseas contingent was led by Nemanja Vukovic, who had a cup of coffee with Columbus Crew SC in 2012 but became Championship Defender of the Year in Sacramento’s inaugural campaign. Joining him was Northern Ireland’s Thommy Stewart, capable of the spectacular and the club’s leading scorer over the course of the year.

And at the center of it all, there was Rodrigo “RoRo” Lopez. The first signing in Republic FC’s history, Lopez and Smith had a long history. Lopez had been key to Ventura County’s title in the 2009 League Two season, and while his time in Portland as the Timbers made the move to Major League Soccer hadn’t gone to plan, Smith knew he had the perfect player to be the face of the franchise in its first year.

There was little stopping Lopez, who if not for an absurd season by Orlando City SC’s Kevin Molino – who won the Golden Boot and Assists Title with 20 goals and nine assists – might have had a shot at the Championship’s MVP award. Instead he had to settle for being nominated as a finalist, his 10 goals and eight assists in the regular season placing him alongside Molino as the only players to rank in the Top 10 in both categories. 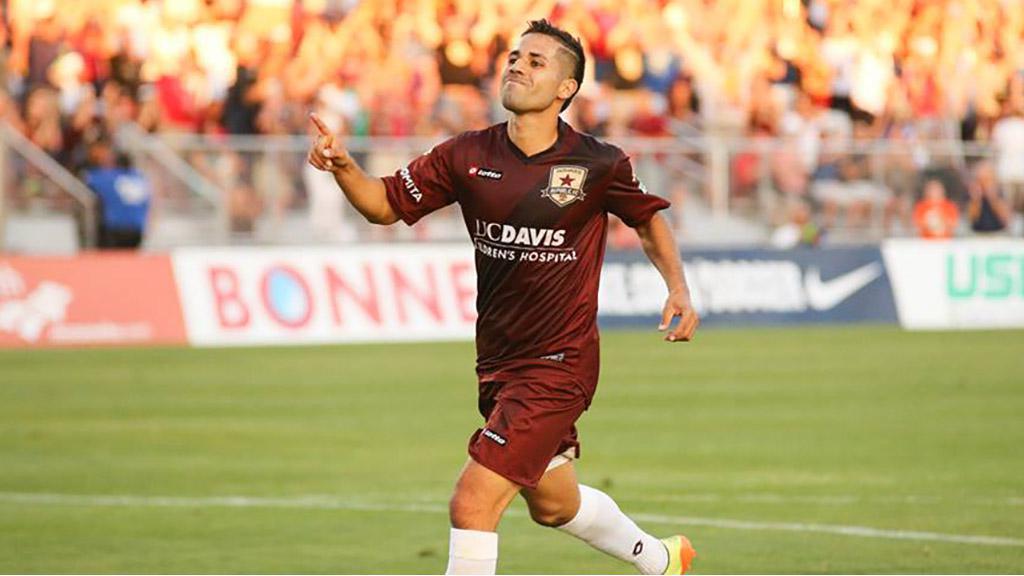 The first signing in Republic FC history, Rodrigo Lopez was the face of the club on the field as he earned nomination for the Championship's Most Valuable Player award at the end of the season. | Photo courtesy Douglas Taylor / Sacramento Republic FC

Lopez’s form, as well as Stewart and others, helped create a stretch of success that proved crucial. Ten games without defeat – including eight victories – allowed Sacramento to comfortably settle into second place in the standings behind Orlando. Even defeat on the final weekend of the regular season to the LA Galaxy II – the club’s first loss at Papa Murphy’s Park – couldn’t seriously dampen the optimism the side felt going into the playoffs.

That confidence looked well-placed against Wilmington Hammerheads FC. Vukovic – who had only scored once in the regular season – struck twice on set pieces while fellow center back Mickey Daly added a third as the side swept to a 4-1 victory in the Quarterfinals.

Then came a rematch with the No. 3-seed Galaxy II, with the right to host the USL Championship Final on the line for both first-year clubs. You might remember how that one turned out.

Lopez’s second-half heroics in what quickly became known at the Miracle at Bonney set the stage for history on the final Saturday in September. In another twist of fate, Republic FC’s first season ended up in some ways coming full circle with the No. 8-seed Harrisburg City Islanders their opponent with the title on the line.

Harrisburg and Republic FC had history. The Islanders had been the first USL Championship side to visit Sacramento in April, spoiling the party for the 20,231 fans on hand a Hughes Stadium as goals early in either half by Robbie Derschang and Morgan Langley secured a 2-1 victory in Republic FC’s inaugural home opener. They were a club writing a remarkable story of their own, having surged into the postseason before knocking off No. 1 seed Orlando to open the playoffs.

There was some notable talent in that squad too, with players like Antoine Hoppenot and Jimmy McLaughlin coming in on loan from partner the Philadelphia Union to add to the talents of midfielders Jose Barril and Yann Ekra, with former All-League goalkeeper Nick Noble backing a solid back line.

The two storylines – and the raucous atmosphere provided by Republic FC’s fans – made for a unforgettable night.

What Sacramento accomplished that year – winning the league title in its inaugural season – has yet to be replicated. That’s due in part to the changes that have occurred in the league. By the start of the following season, 10 more teams had arrived in the Championship, a number that has continued to rise since. The level of competition is now far higher, reflected by the number of current and former internationals that now grace the league’s venues.

It also speaks, though, to how special that first Republic FC side was. Sacramento’s leadership off the field gave fellow teams – and those that would arrive in the Championship in future seasons – a blueprint on how to create a club that would not only succeed on the field, but resonate in its community.

And on the field? It produced a team that time and again rose to the demands of the occasion, leaving lasting memories for all that saw it perform.