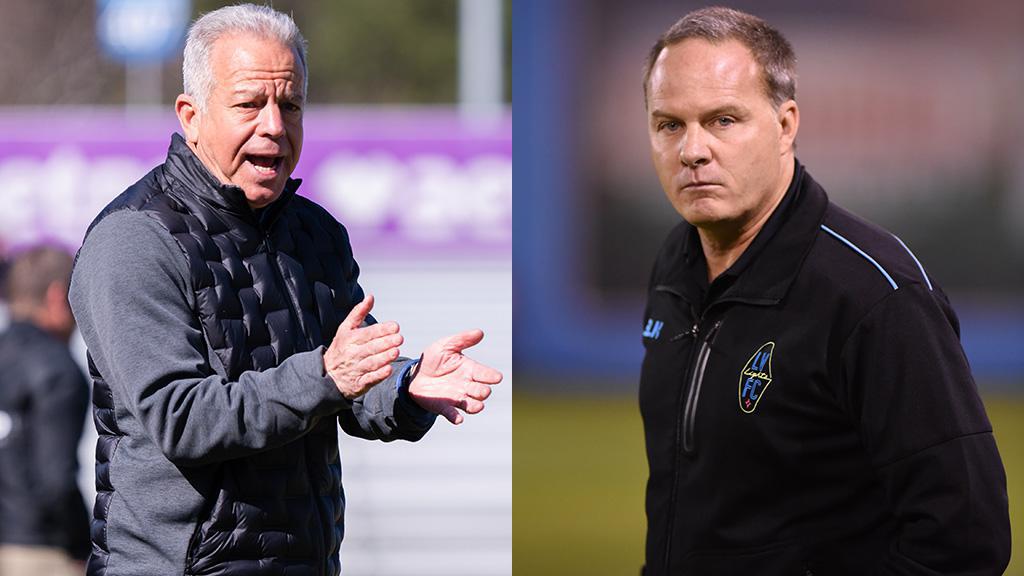 The challenges of competing on the road in Concacaf during World Cup Qualifying are the stuff of legend, and something current North Carolina FC Head Coach Dave Sarachan knows well.

So, his selection for the toughest place he’s ever had to stand on the sidelines shouldn’t come as any surprise.

“I love Costa Rica,” Sarachan told host Dean Linke and fellow guest Eric Wynalda on Tuesday in a United Soccer Coaches webinar on How Adversity Builds a Stronger Coach. “I’ve vacationed there, I’ve gone there with my wife, but to be there with our national team to play Costa Rica at Saprissa was terrifying. It was terrifying. Azteca was a difficult place, but they’re not on top of you like Saprissa.”

“I’m with you on Costa Rica,” he added. “Nicest people in the world, you get there, everybody is so sweet, the game starts, they rip their faces off and they’re screaming. Terrified is legit. I think Paul Caligiuri was hit by a sling-shotted baggie full of calf’s blood with a battery in it during the walk-on, just before the game. To this day we tease him because he goes, ‘I’m hit!’”

The conversation was part of a wide-ranging, hour-long discussion that dug into many facets of both Sarachan and Wynalda’s careers. As well as discussions on the approaches they’ve taken not only to the current situation of leading a team that has been training in isolation for more than a month-and-a-half, the duo also spoke to the tenets they believe help make a successful player in the professional ranks.

At the center of that path for both is the importance of speed and being unafraid of doing things fast.

“The analogy I give my players is I’m giving you the keys to the car,” he said. “The corner on this turn says 45 miles per hour. I want you to go 70. This is practice, go 70, crash the damn car. Because what’s going to happen is eventually, you’re going to get to the point where you’re going to be going 60 and it’s going to feel like 45. If you don’t do that, if you don’t test yourself on a daily basis – and we work it into our drills, whether it’s passing or passing through gates or understanding space – everything needs to be done at speed.

“Everybody can do something slow and perfect, but it’s the players that have the willingness to really test themselves, to do things as quickly as they possibly can that are the ones that we feel will progress as players.” 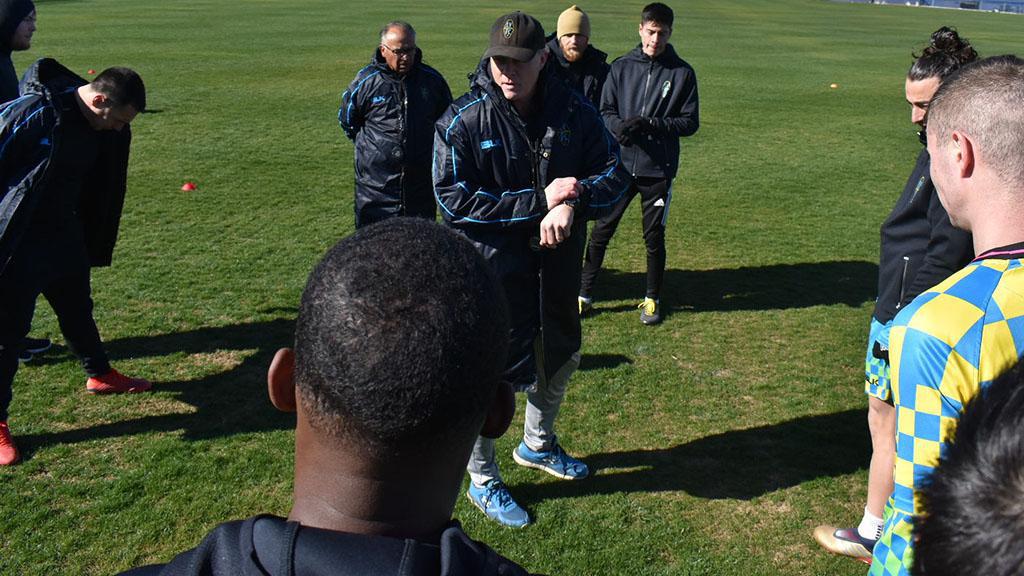 “Speed is so critical,” added Sarachan. “I’ve been coaching a long time, but I haven’t learned it all and I still adapt. Even in my training sessions, I’ve encouraged exactly that, whatever we’re doing, do it at speed. All the little details that are involved with getting your feet arranged and timing and the weight of passing, it’s repetition, [and] whether it’s our level, rec level, youth level, speed is critical.”

While a former MLS Coach of the Year in his own right, Sarachan is also known as having been the right-hand man for U.S. Soccer Hall of Fame member Bruce Arena at both the national team and club level – “As a player who had gone through everything that I had gone through, I loved that environment that you guys created,” Wynalda said of his experience as a player with the two. “The spirit that we had as a national team was really terrific.” 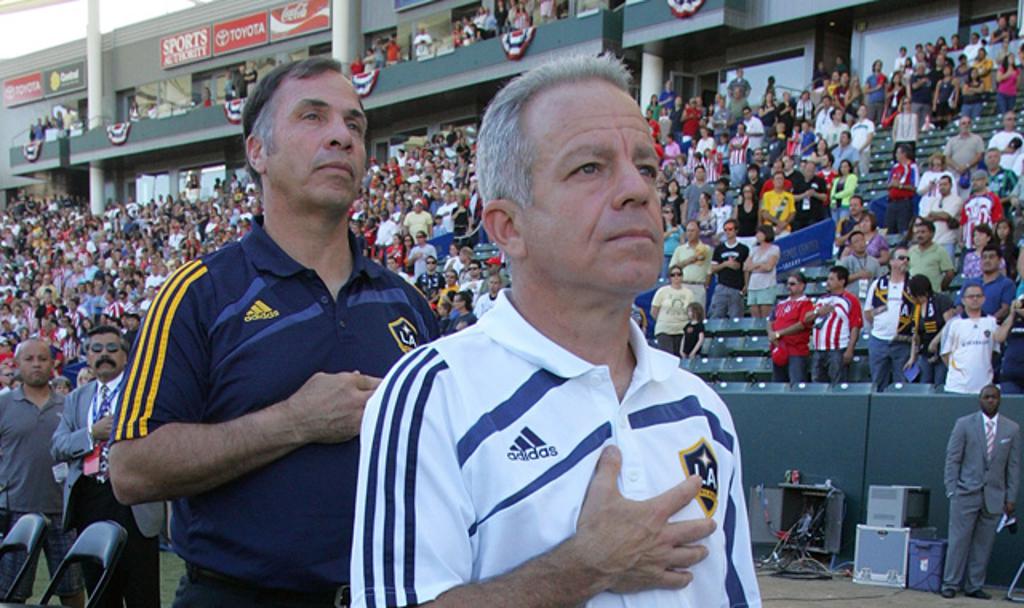 Dave Sarachan (right) and Bruce Arena formed one of the best-known coaching duos in American soccer at both the LA Galaxy and for the United States Men's National Team. | Photo courtesy LA Galaxy

For Sarachan, the reason the partnership between he and Arena worked was not only because their strengths as coaches complemented each other, but they also weren’t afraid to challenge each other. It’s a trait that Sarachan believes is key to building any successful coaching staff, including the one he now works with for NCFC.

“You get nowhere if you hire people that just say, ‘hey, you’re great, I believe in everything you say,’” said Sarachan. “I think it’s so important to have the right character, obviously player personnel that knows how to work with people and communicate and are good listeners. As a staff, as the Head Coach, you need a guy alongside you that can bridge that gap between players and head coaches, that can be good listeners.

“The biggest thing that I’ll leave this with is to allow them to run sessions, to have a voice, because it becomes about ego so much of the time. Head Coaches feel sometimes they have to be the voice, and as soon as an assistant coach gets too much of a voice, they yank the rug out from under them. No, you have to trust that within your staff to allow them that voice to help them develop as well.”

That concept of a collective effort rings true for Wynalda as well. Now in his second year with Las Vegas, the 50-year-old is looking to lead Lights FC to its first playoff berth this season and believes he has a staff around him that can get the best out of the squad at Cashman Field.

“I’m very fortunate. I have Rudy Ybarra, who used to play in the NASL with [Johan] Cruyff and [George] Best and all that stuff, and he sees things I don’t see,” said Wynalda. “And if I’m not willing to ask the question, or have someone challenge me on a constant basis, then it’s just not going to work. I have Kell Phillips that does such a phenomenal job of setting up our sessions every day, recognizing what we need to do, what we need to address.

“We have a meeting every day at 8 o’clock, two hours before we even start training and run down all the things we need to do. And what we come to the table with originally isn’t always the final product, and we have that ability to communicate with each other and say, ‘I don’t think that’s necessary today,’ and sometimes we hurt each other’s feelings, but at the end of each day we walk out of that room and we’re going to do what’s best for our team.” 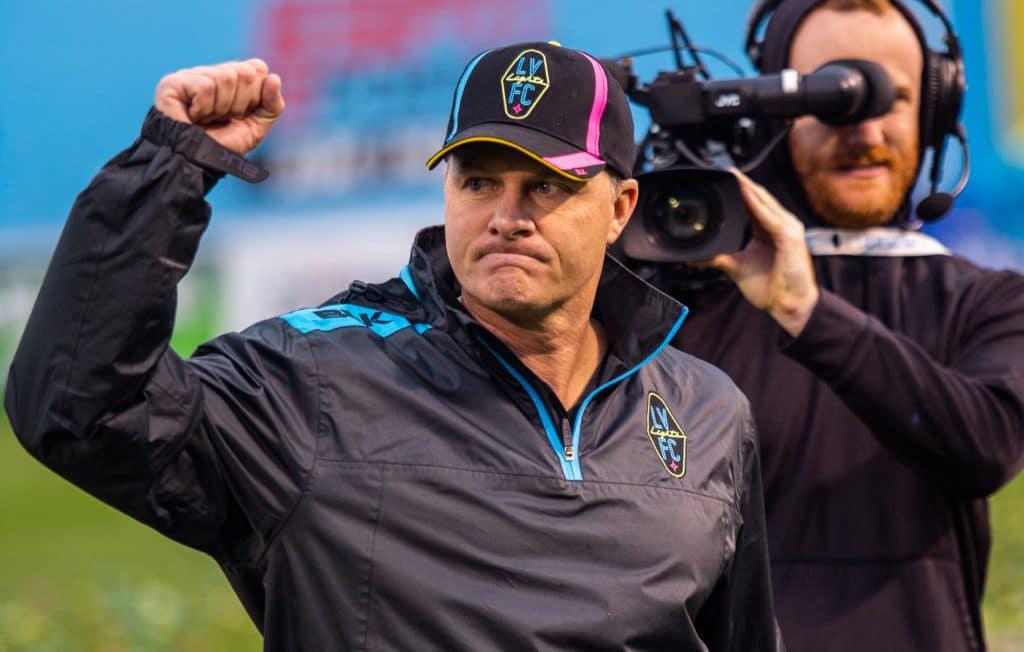 And as his former coach, Sarachan is certainly happy to see Wynalda now alongside him in the coaching ranks.

“We need people like you coaching,” said Sarachan. “I think you made a great, bold move to get out of broadcasting to get on the field because that’s your passion. We need people like you who have played at a high level, who understand the game. We need you in coaching and the coaching profession to lead young players because U.S. Soccer, whatever direction they’re going to take, the right people should delegate and lean on you, or people like me and Bruce, that have had the experience to get some answers, but you’re more important in our profession right now.”