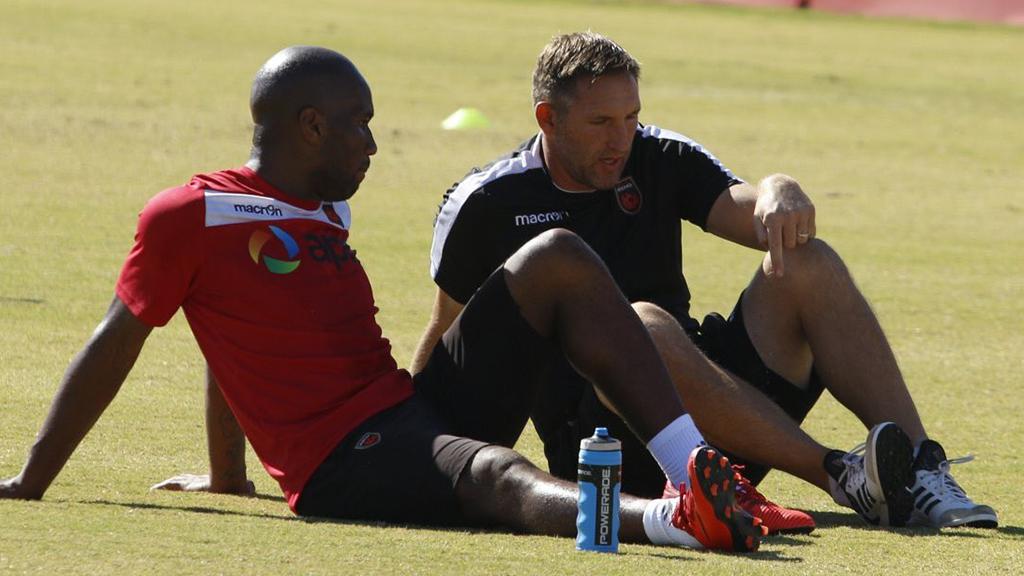 PHOENIX – It was the 72nd minute of Phoenix Rising FC’s Western Conference Quarterfinal against the Portland Timbers 2 in the 2018 USL Championship Playoffs when the fourth official raised the board at the halfway line for a substitution by the hosts.

Illuminated in red, denoting the player to exit, was the No. 11.

For a moment, Didier Drogba stood on the field, ball in hand a little further up the sideline, ready to take a throw-in. He couldn’t quite believe it was his number being called to the bench.

For Rising FC Head Coach Rick Schantz, it was a challenging moment, but as he recounted to the USL’s Kelsi Steele on Saturday in a conversation on Instagram Live, it also produced one of the greatest moments of his coaching career so far.

“I don’t think he was ready to come off the field at the time and there was some tension,” Schantz told Steele. “We met on Monday, and it was like a man-to-man conversation and it was one of the best conversations I’ve had with a player, because I think leaving that office there was a mutual respect. I was very up-front with him about what I was trying to accomplish and achieve and at that point I realized, ‘OK, here, this is your team, we’re going to go as far as you take us,’ and he took us to the Final. We came up a little bit short, but what an experience that was. I’ll never forget it.”

Now entering his second full season as Rising FC’s Head Coach, Schantz’s talents as a motivator and tactician have placed him among the best in the Championship. The league’s Coach of the Year in 2019 after a season that saw his side break all the Championship’s major regular-season records – including one that might go down as unbreakable in a 20-game winning streak – he is now firmly installed as the man on the sideline, having signed a new contract last offseason.

“Rick has been an essential part of our success over the last three years, including our record-breaking 2019 season,” said Rising FC General Manager Bobby Dulle earlier this year. “His commitment to high standards has helped develop a strong culture throughout the entire club.”

But Schantz does recognize how much he gained from having Drogba as part of his squad as the club took flight after its rebrand entering the 2017 season. Part of a new coaching staff brought in by the new ownership group led by Governor Berke Bakay, Schantz served twice as an interim Head Coach, first in 2017 between the departure of Frank Yallop and arrival of Patrice Carteron, and then following Carteron’s departure to take the helm at Egyptian power Al Ahly.

The regular conversations Schantz and Drogba would engage in following practice provided information and context that helped shape Schantz as he moved from being a successful coach in USL League Two at FC Tucson to one of the best in Championship in what had become – thanks to Drogba’s presence in the team – a high-profile position.

“The thing I learnt the most from Didier is to trust the players and to listen to them,” Schantz told Steele. “Obviously there’s a balance – there’s a fine balance. It’s not a dictatorship but at the same time it’s not an anarchy, so you have to kinda find a way to build trust, and in this day and age you’ve got to earn it from your players, and it comes from listening, it comes from allowing them to express themselves, and that’s part of how we try to build our team and allow them to play football where they can express themselves. I learned a lot of that from Didier.

“I can’t tell you how many times after training I would just sit on the field and ask him questions about managers that he had, and the details that were put into it. And the guys he was telling me stories about, Avram Grant, [Jose] Mourinho and you go down the list and the places he played and I was just like, ‘Oh my gosh.’ I was just trying to soak it all in, every day.”

As for the night in which he substituted the living legend off the field, there is another memory Schantz has also carried with him happily to this day.

“After we won our first playoff game [against Portland] … I went up on the roof of the owner’s suite where they were all celebrating that we had won,” Schantz told Steele. “I’ll never forget Berke and some of the owners – I don’t think they could keep it in anymore, but they were smiling and wanted to tell me the job was going to be mine the next year in 2019. When I found out officially after the playoff run was over, that was a pretty special moment. It felt like you worked really, really hard for something and you’d earned it, and I told them I won’t let them down.”

As high as the bar has been set, Phoenix’s rise seems far from over.