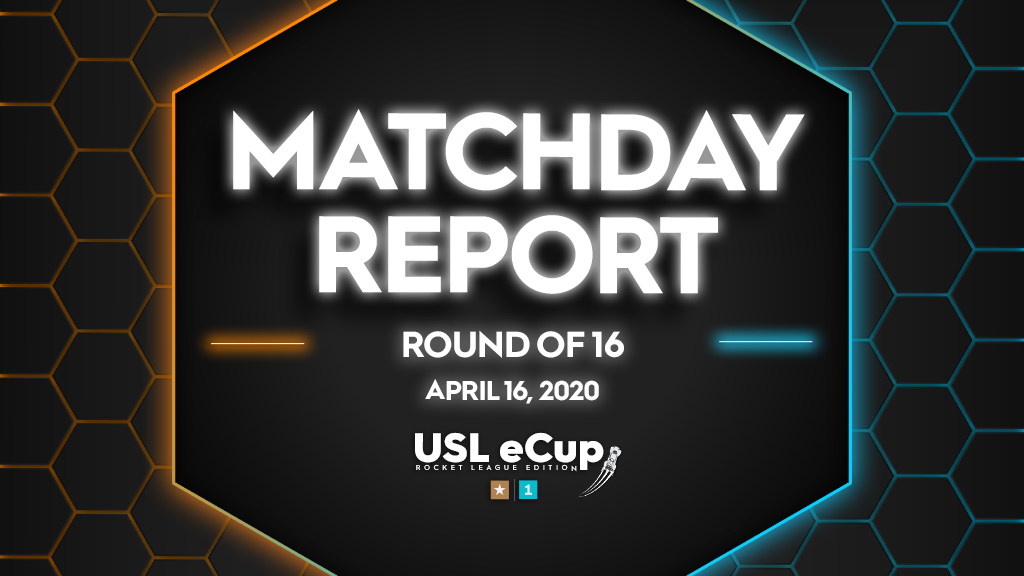 The Charleston Battery and San Antonio FC each swept to victory against Reno 1868 FC and Phoenix Rising FC, respectively, in the Round of 16 of the USL eCup: Rocket League Edition to set up a must-see meeting between the two clubs in next week’s Quarterfinals.

The Charleston Battery’s Mauro Cichero continued to impress as he took victory (9-4, 10-0, 13-1) against Reno 1868 FC’s Matt Rafferty to maintain his pursuit of the title.

The Battery took the early lead in Game 1, with Cichero taking a three-goal lead 1:18 into the period on an upfield surge that ended with a lifted finish just under the crossbar. Reno responded well with two goals in four seconds to cut into the deficit, the second on a big faceoff victory, but Charleston responded with another three-goal run to make it a four-goal game with just under two minutes to play. A missed clearance on a ball into the penalty area allowed the Battery to effectively seal the game with 1:28 to play, as while 1868 FC was able to notch a late goal it was too wide a margin to overcome.

Charleston once again took control early in Game 2, opening the scoring after 16 seconds with a close-range finish and once again building a quick three-goal lead. This time, however, there would be no comeback from Reno as Cichero maintained his pressure to take a five-goal lead with 1:59 to play while limiting Reno to only two shots total to claim the shutout victory.

The same pattern continued into Game 3 as the Battery took a two-goal lead in the opening 20 seconds and extended that lead to five with just over a minute gone. Charleston ran its lead into double digits before Reno got on the board to avoid the shutout, but Cichero’s performance overall was once again first class as he recorded eight saves across the three games.

SAFC opened the scoring in Game 1 after just 13 seconds, which set the stage for Richards to shine. San Antonio took a five-goal lead with 1:03 gone – including a fourth tally that showed off Richards’ close control with a near-post finish from the left – while Phoenix struggled to get a grip of the game. Rising FC struck late to avoid a shutout, but it went down on the side’s only official shot of the game.

Game 2 opened in similar fashion as SAFC took a two-goal lead after 29 seconds and then showed off impressive boost control to make it three just over a minute into the contest. Rising FC looked to fight back, but Farrell’s attacking forays were turned back by Richards, who finished with five saves for the game while conceding only once. Phoenix’s tally cut the San Antonio lead to 6-1 just over two minutes into the contest, but from there SAFC pulled away to reach double-digits before Rising FC notched a late consolation.

San Antonio’s defense was on even greater display in Game 3 as it once again gained the upper hand early in the contest and then put on a big display in its own end that SAFC goalkeeper Matt Cardone would have been proud of. Richards recorded eight saves to keep Phoenix off the scoreboard in completing the sweep, while also finding the net five times in the opening 1:08 of the game to run away with victory.