Reno, Austin book places in the Round of 16, Union II downs Phoenix for group victory 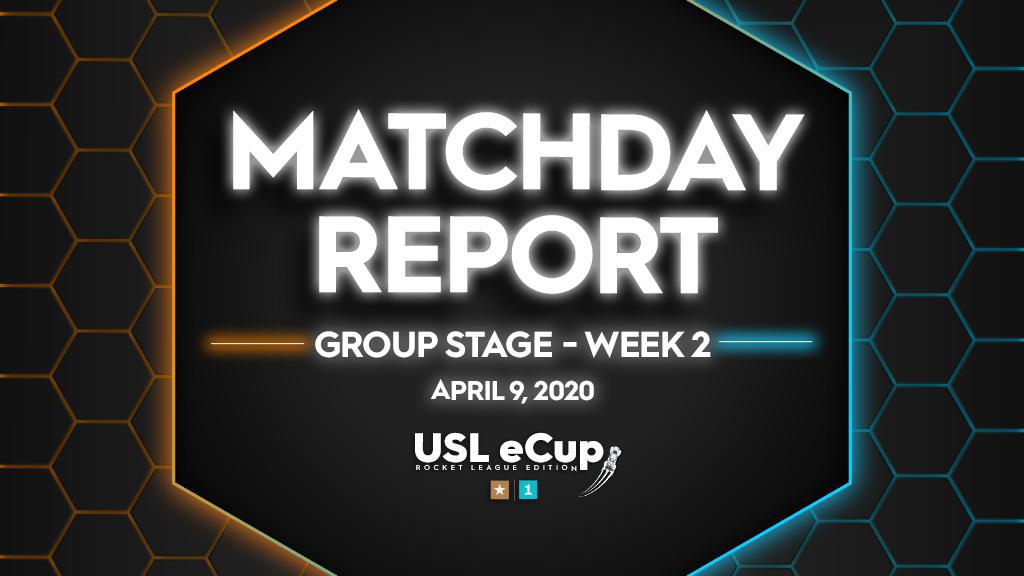 Reno 1868 FC and Austin Bold FC were the latest clubs to take their place in the Round of 16 bracket after victories on Thursday in the USL eCup: Rocket League Edition, while the Philadelphia Union II claimed Group 3 with a win against Phoenix Rising FC on a day that saw overtime drama and the first three-game series of the tournament.

Tacoma Defiance’s Josh Atencio was taken to overtime in Game 2 by North Carolina FC’s Drew Rutledge but emerged with a two-game sweep (7-0, 6-5) to remain perfect going into the knockout stage.

The opening game of the series provided little concern for Tacoma, which took a two-goal lead with 25 seconds gone in the contest and a five-goal advantage less than 90 seconds in. Game 2 got off to a similar start as Atencio scored the opening two goals of the game, but then NCFC came alive to tie the contest with two goals in 11 seconds to tie things up.

North Carolina then took the lead, and Rutledge made it a two-goal game at 5-3 through a long-range finish with 1:17 to play in the game. The Defiance wouldn’t be denied, however, as Atencio took control of the ensuing faceoff to pull one goal back before weaving past NCFC’s press to score the equalizer with 19 seconds to go. After a narrow miss in the dying seconds to win it, Tacoma sealed the victory in overtime as Atencio skipped past a challenge before sliding the ball into the net 16 seconds in.

Reno 1868 FC’s Brad Palonsky held off a valiant effort to force a third game by Louisville City FC’s Sean Totsch to take an overtime victory in Game 2 and book second place in the group with a two-game victory (6-2, 4-3).

1868 FC was in control for much of Game 1 as Palonsky pulled out to a four-goal lead before Totsch found the board with 2:10 remaining, but a comeback wasn’t in the offing as Reno kept LouCity at arm’s length. Game 2 offered far more intrigue, however, as Louisville struck twice on long-range finishes from its own half within the opening 38 seconds.

Reno pulled a goal back as LouCity was caught in possession in its own end to set up an easy finish. Totsch’ patience looked poised to send the series to a third game when he restored a two-goal lead with 51 seconds to play on a counterattack. Reno didn’t flinch, however, and tied the game with two goals in 34 seconds to send Game 2 to overtime. Louisville again almost struck just under a minute in with Totsch seeing two chances just miss the target, and at the 1:19 mark of the extra session Reno surged into the Round of 16 with a perfectly-timed boost allowing Palonsky to finish.

Austin opened Game 1 on the front foot, scoring twice in the opening 32 seconds, and while the Switchbacks were able to keep it close for a while, Bold FC pulled away with three goals in the final 90 seconds of the contest. The sides then exchanged goals early in Game 2, but a run of nine consecutive goals by Bold FC put the game out of reach in impressive style.

The Charleston Battery’s Mauro Cichero put in another outstanding display, putting up 23 goals in two contests to earn victory (13-2, 10-1) against South Georgia Tormenta FC’s Daniel Jackson to finish clear at the top of the group.

The Battery ran out to a six-goal lead in Game 1 just past the midway point of the period as Cichero found the right angles consistently and finished with style. Charleston wouldn’t see its lead drop below that margin in the remainder of the contest, and the Battery continued in a similar fashion in Game 2. After Tormenta FC had scored to make it a two-goal game and cut into the Battery’s early lead, Charleston scored the final seven games of the contest to claim a decisive victory.

Game 1 opened evenly as the sides exchanged goals, but a run of three goals by Slabicki saw him take control of the contest 90 seconds in. Phoenix kept it a three-goal game at 5-2 but could get no closer as the Union II pulled away for victory. That momentum carried into Game 2, where Rising FC managed only one official shot as Philadelphia pulled away for a shutout win.

Toronto FC II’s Kevin Silva scored an overtime winner 1:08 into overtime of Game 3 to take victory (3-0, 3-4, 6-5) against San Diego Loyal SC’s Andrew Vassiliadis as the tournament came to an end for both clubs.

TFC II made a positive start in what was a hard-fought contest throughout as Silva opened the scoring with 1:44 to play in Game 1, and then twice more in the final minute. SD Loyal gained the upper hand to open Game 2, however, scoring the opening two goals with finishes to the left corner of the net while adding a third on an effort that Silva couldn’t quite keep out.

Toronto mounted a comeback, though, and found an equalizer with 17 seconds to play, moments after San Diego had missed a chance to make it a two-goal game. As time expired, however, SD Loyal pulled out the victory as pressure inside the Toronto penalty area led to a decisive winner and the first three-game series of the tournament.

Toronto flew out to a lead after five seconds in the decider, judging the carom off the faceoff perfectly for a first-time finish, but 19 seconds later SD Loyal leveled. TFC II regained the lead, however, and pulled out to a three-goal lead just over 100 seconds in. Once again, San Diego remained within range to where a comeback might be possible, and with 1:25 to go the scores were even again at 4-4 as Vassiliadis went end-to-end for a finish. SD Loyal looked like it might have clinched victory with 52 seconds to go as it took the lead, but this time it was Toronto that pulled out the late heroics with a goal eight seconds from the final horn. Then, after more than a minute of stalemate in overtime, a missed block on an upfield rush by Silva allowed TFC II to walk in and take the victory.