Brought on board by former teammate Tim Howard, playmaker has overcome prior struggles, is ready to make difference 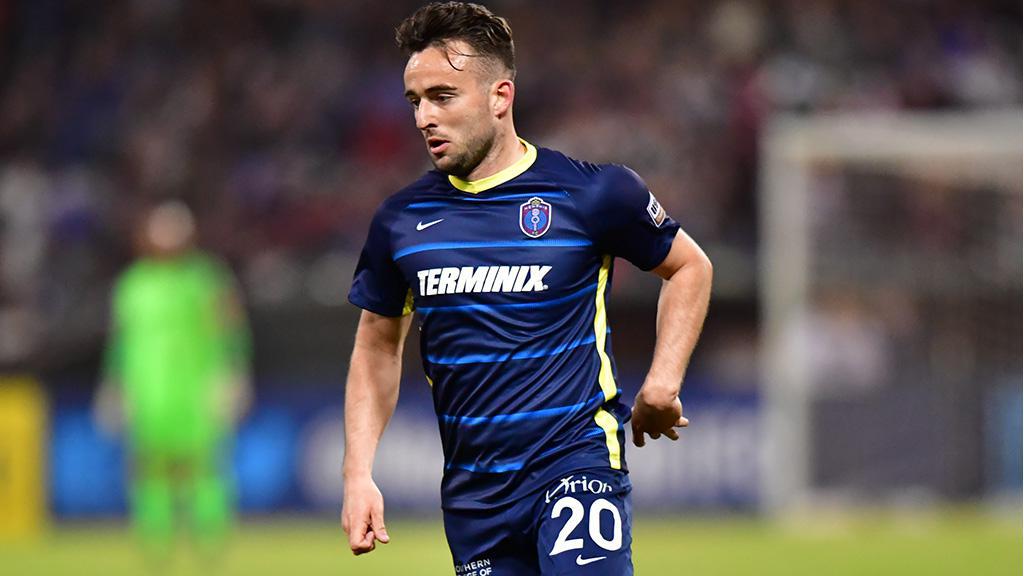 Memphis 901 FC's Jose Baxter has found a chance at a fresh start in the Bluff City as he joins former teammate Tim Howard at the club. | Photo courtesy Eric Glemser / Memphis 901 FC

MEMPHIS, Tenn. – In his role as Sporting Director at Memphis 901 FC, it’s imperative for Tim Howard to use a no-stone-unturned approach when it comes to finding players that can bring the club success.

So, when he heard his former Everton teammate Jose Baxter was on the market and looking for a fresh start, Howard wanted to move quickly to secure the services of a player he believes can be a high level difference-maker in the Bluff City this season.

“In simplistic terms, my job is to ensure we have success on the field,” Howard told The Athletic’s Greg O’Keeffe. “The best way I can do that is to bring a team and squad together by using my experience and connections with players and agents. Beg, borrow and steal.”

“Jose was a name that got put to myself and my football group and we snatched at the opportunity because he is a generational footballing talent and he’s still only 28. It’s a chance for him to come over and be a leader on our team. His technical ability and football IQ is second to none.”

Howard knows Baxter better than most. He was in goal when Baxter became the youngest player to play for Everton on August 16, 2008 against Blackburn Rovers aged 16 years and 191 days old on the opening day of the 2008-09 Premier League season. Baxter’s talent – which drew comparisons to fellow Everton Academy graduate Wayne Rooney – saw him represent England at the at the 2009 UEFA European Championship.

But off-field problems – including club suspensions for taking ecstasy and cocaine while at Sheffield United in the early 2010s – derailed Baxter’s path. Self-medicating as he struggled with depression, the 28-year-old has since reached the other side and considers himself in a far better place mentally nowadays.

“My mind now is in a very solid place and I’ve been a mess, so I know the difference,” he told O’Keeffe. “I’m not saying I’m perfect. I’m still learning about life but, mentally, nothing can break me now. I’ve been through the darkest times and come out the other side of it. I’ve had a second chance in life and football.”

In some ways, that was where the appeal in joining a club like Memphis lay. After struggling with a calf injury at his last stop at Plymouth Argyle – which agreed to his release on amicable terms – he’s now getting a chance in a new city, and a new country. While he’s isolated from family – his wife and daughter are set to visit soon – he’s finding the routine of getting back on the field and being around his teammates consistently is helping him adapt to his new surroundings.

“I’m in an apartment which is 10 seconds from the [AutoZone Park],” he told O’Keeffe. “The majority of the lads live nearby, too. I walk from my living room and I’m basically in training, so it’s really convenient.

“There is a games room in the complex where I live with a cinema room and it’s great because we tend to get together and watch the Premier League, especially Super Sunday. We all watched Everton at Chelsea then the Manchester derby on Sunday.

“Some of us are on our own over here, so it’s good to have that. There’s the added benefit that Tim Howard is on the coverage sometimes in the studio, so we can watch it and give him stick.”

Baxter put in a solid performance in his first appearance for 901 FC last weekend, too. Completing 33 of 40 passes, recording three crosses and two shots while winning 6 of 9 duels in Memphis’ contest with Indy Eleven, he put in a good shift over 82 minutes, even if the result didn’t go 901 FC’s way.

After all that he’s seen as a player, Baxter is determined to make a difference in leading Memphis to success, while also charting a new path for his own career.

“I’m classed as a senior player now,” Baxter told O’Keeffe. “The things I’ve seen and what I’ve been through, I’ll speak up. I’m going to be a voice in the dressing room and on the pitch.

“When there’s someone talking on the pitch, saying, ‘Come left or come right’ or maybe, ‘Save your legs’, it’s helpful for younger lads. If we’re not up to it in training, I’ll shout up too. Standards have to be high if you want to succeed — and I really do.”