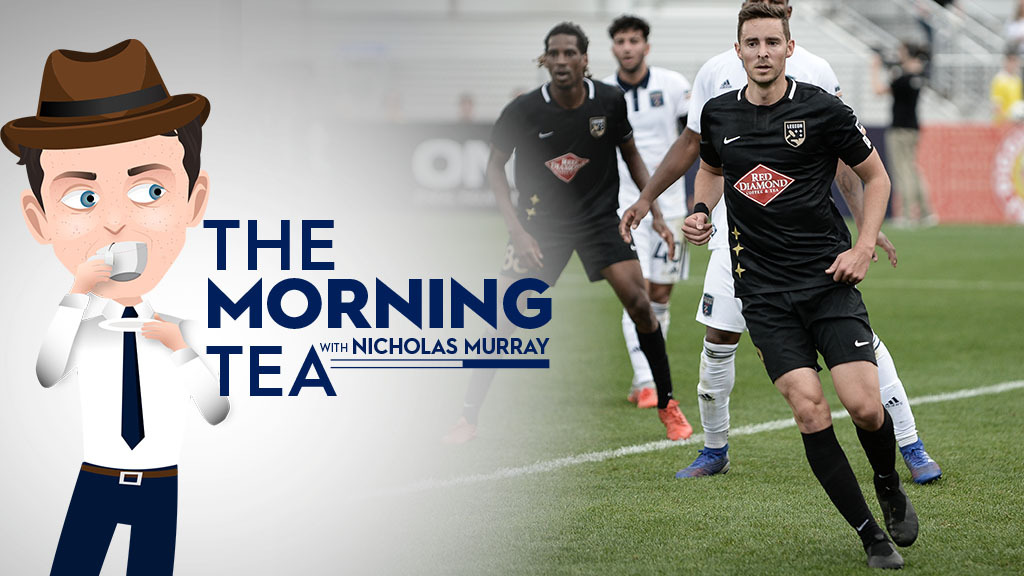 We’re four days away from live USL Championship action returning to our screens. Welcome back to the Morning Tea.

IRVINE, Calif. – Orange County SC decided it was going to open the Independence Day holiday weekend with some transactional fireworks, announcing it had acquired Chandler Hoffman on loan from Birmingham Legion FC for the remainder of this Championship season on Friday afternoon.

In terms of high-profile mid-season moves, it’s up there with some of the biggest we’ve seen in the Championship, comparable with Thomas Enevoldsen’s move to Sacramento Republic FC from Indy Eleven last year, albeit in very different circumstances due to the long wait for a return to action.

So, what does it mean?

Well, for Orange County it certainly appears to be an affirmation that they are eager to match Phoenix Rising FC’s potential firepower, with Hoffman – the third-leading scorer in the Championship’s history – joining Enevoldsen and 2016 Championship Golden Boot Sean Okoli in Orange County’s squad.

There are plenty of options there for Head Coach Braeden Cloutier on how to use them if everyone is healthy – If we’re going off OCSC’s opener, how does an attacking pair of Hoffman and Okoli with Enevoldsen playing as the No. 10 sound? It also brings the chance for flexibility, with Okoli and Hoffman able to rotate and bring similar skills in and around the box to maintain a serious threat to every defense.

On the other hand, for Birmingham Legion FC, it provides a different type of flexibility, with the potential Head Coach Tom Soehn may try to shore up his defensive corps ahead of what looks like a challenging Group G against the Charlotte Independence, Memphis 901 FC and North Carolina FC. It also says Neco Brett and Brian Wright are ready and raring to go, starting next week at home to Memphis on ESPN2.

As the season gets ready to return to play, though, this news added a new wrinkle into the 2020 story of both clubs moving forward.

For the first time in ~17 weeks, the @USLChampionship is back in action!

Hey @USLChampionship, we have an early candidate for Goal of the Week courtesy of @willvint!#SwitchbacksFC pic.twitter.com/okR7Ue4LJk

- Last year, there were some great places to watch games in the Championship. In the first of a new series entitled “The Experience”, El Paso Locomotive FC photographer Jorge Salgado showed off a few of his favorite photos from 2019.

- Queensboro FC has its first Head Coach and Sporting Director in Spaniard Josep Gombau, who brings top flight experience from Australia’s A-League and the India Super League with him to Queens. Gombau was most recently Head Coach at the ISL’s Odisha FC, which finished sixth in the league, four points out of the playoffs.

- Given his experience in the FC Barcelona academy, Gombau’s experience seems well-suited to the club’s build on the field, which will see QBFC now take the field in the Championship in 2022 to allow it to fully establish a youth academy as a local talent pipeline to the senior team, and to finalize stadium plans.

- FC Tulsa’s Nigerian forward Mfon Udoh is excited to return to action with his new club, telling AOI Football, “There is no pressure at all for me; it’s a different terrain from the [Nigerian Professional Football League] but I’m fully prepared for the challenge ahead.”

- In case you missed it over the weekend, make sure you read my colleague Cameron Koubek’s piece on San Antonio FC’s Jose Gallegos and his ascent to the club’s First Team through the club’s Academy system.

- Another key part about Gallegos’ ascent? He got his start at Classics Elite Soccer Academy before moving into the SAFC Pro Academy. It’s about as good an example as you’ll find of how the new USL Academy model of player movement is supposed to work.

- Very good read on Forward Madison FC forward Michael Vang by These Football Times’ Dominic José Bisogno, who details the journey of the Hmong athlete from St. Paul, Minnesota through Shattuck St. Mary’s and into the professional ranks.

- Phoenix Rising FC is (still) the favorite to win the USL Championship Final? You don’t say. Find out what odds fivethirtyeight.com gives Rising FC of winning Group B, and plenty of other data ahead of the league’s return to play.

- It’s been almost four months, but the USL Championship Power Rankings are also back. Go feast your eyes on the changes.