U.S. soccer legend aiming to have a positive impact in addition to pursuit of victory in Championship

We are just days away from the official managerial debut of U.S. soccer legend Landon Donovan. Following an illustrious playing career that many only dream of, the recently turned 38-year-old has now set his sights on the USL Championship as manager and Executive Vice President of Soccer Operations for the league’s latest addition, San Diego Loyal SC. Earlier this week, Donovan opened up about his ambitions for the club, his managerial philosophies and about Saturday’s inaugural home opener against Las Vegas Lights FC.

SAN DIEGO, Calif. – There’s a soft-spoken confidence about Landon Donovan. Maneuvering his way through questions with the kind of purposeful deft you would typically see with a ball at his feet, the former U.S. Men’s National Team superstar made it quite clear that he is committed to making a lasting impression in his latest project.

“My personal goal,” said Donovan about his responsibilities with SD Loyal, “is to positively impact these players’ lives through this game that I love.”

The beginning of that process has evolved throughout the past couple of months of preseason. Although he admitted the first three weeks “were very challenging,” more recently signs of real promise and potential for his new set of players have arrived.

“It’s been a revelation to watch these guys come together and start to look like a real team,” said Donovan. “We think we have a very deep roster – and a good roster – so competition to play is very high.”

All that said, Donovan’s current priorities seem focused on much more than what’s simply happening on the field. Slaloming his way past any tactical talk, he instead preferred to discuss the overarching values of leadership and respect that he wants to instill in the early days of SD Loyal’s existence. With a sincere tone, Donovan opened up about the importance of also truly connecting with those that surround him within the club.

“When you treat people with respect and you push them to get better every day, I think that shows up [on the field],” he added.

There’s also the need to make time for the bigger picture. Despite the fact that most of his day-to-day requires a focus on the managerial side, he’ll still need to help navigate the organization forward as the Executive Vice President of Soccer Operations.

“The biggest challenge is just finding enough time in the day to get everything done, but that’s where having a great staff comes in,” said Donovan.

It’s a staff that has turned heads in the U.S. soccer world, with assistant coach Carrie Taylor leading a strong contingent of women on the club’s technical staff. Along with Taylor, who according to Sports Illustrated “is one of the first women to be on the coaching staff of a U.S. pro men’s soccer team,” Donovan also helped bring in a number of women to front office positions that will help create the initial foundations for the club. 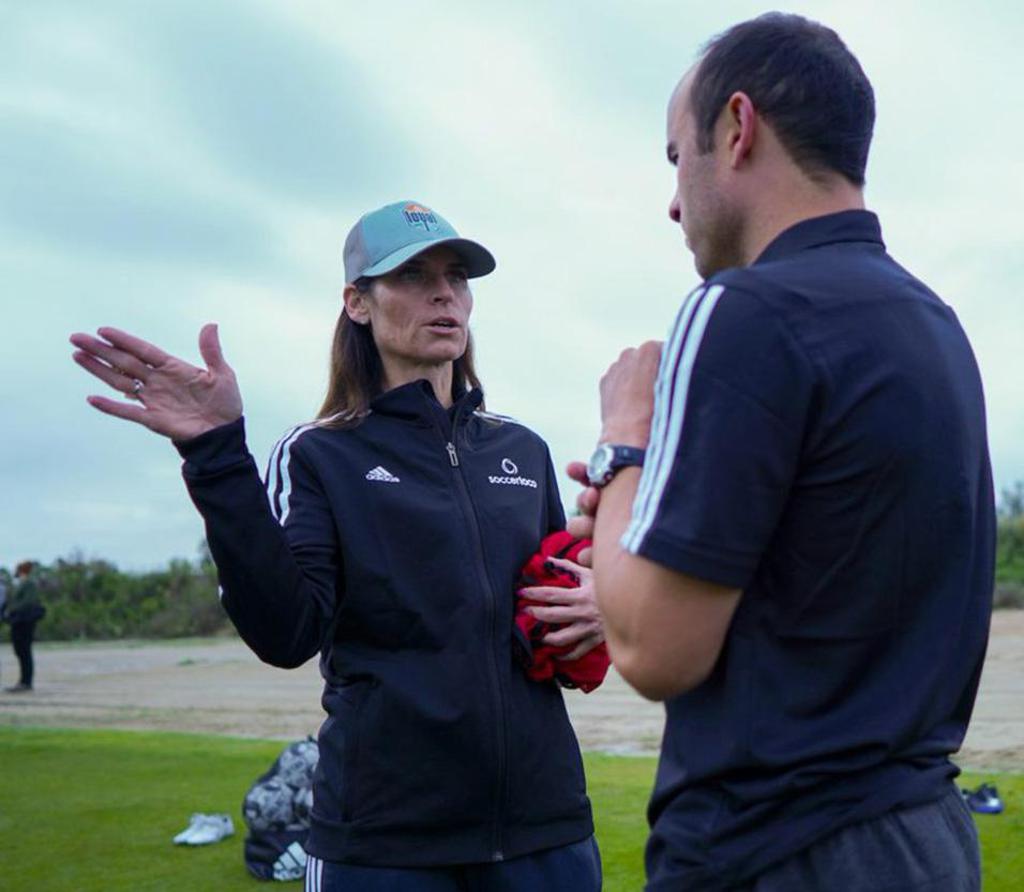 Assistant Coach Carrie Taylor has been an essential part of Donovan's team throughout SD Loyal's buildup to its inaugural season, and is part of a notable contingent of women in the club's technical staff. | Photo courtesy San Diego Loyal SC

For Donovan, decisions like these are all about long-term goals, focused on giving chances to those who might have previously been overlooked.

“I think that approach allows us to hire people and give opportunities to people who might not otherwise have the opportunity,” he said. “It’s not just with Carrie, Carrie is getting an opportunity that most women do not get [in men’s professional soccer], but also Nate Miller, our other assistant coach who was at Lansing [Ignite] last year.

“He might have been resigned to getting another job in [USL’s] League One, but we wanted to give someone who we think had a lot of potential an opportunity.”

A perfect preseason, well-thought-out front office hiring and a philosophical focus on connecting with everyone inside and outside the club point to the likelihood of a successful first season – which is encouraging for eager fans.

Steve Brockhoff, President of The Locals – a supporter group for SD Loyal – is optimistic.

“Front office, staff, and technical staff are all top-tier, including Landon, as well as the roster constructed,” said Brockhoff. “I've been really impressed by the few preseason matches I've been fortunate enough to see so far, and am expecting this form to carry through the season.”

As for the atmosphere at home games, we’ve already had a glimpse at what The Locals and the rest of San Diego can provide. In their final home friendly before the start of the season, more than 3,000 fans were on hand at Torero Stadium last month to support Loyal SC in the 1-0 friendly win over Costa del Este. As you’d expect, The Locals took it upon themselves to be the pulsing and vocal heartbeat of support that lasted for the full 90 minutes.

“Just because we're new this year, that doesn't mean we need a learning curve,” added Brockhoff. “We're ready to hit the ground running with several hundred members [of The Locals] and a packed supporters section to sing loud for our club, give the opposition hell, and have the time of our lives doing it all.”

SD Loyal President and co-founder Warren Smith, who dove in to join The Locals in the friendly at Torero, also appeared eager in a recent conversation about Saturday’s match.

“There’s nothing more exciting than opening night,” said Smith. “It’s a chance for us to actually put our stick in the ground and actually say this is who we are and what we are about.”

And yet, the possibility does remain for the opposition to spoil San Diego's party.

“We’re looking at making a statement ourselves and it doesn’t matter who is in our way,” said Las Vegas Lights FC manager Eric Wynalda, who will lead the visitors on Saturday. 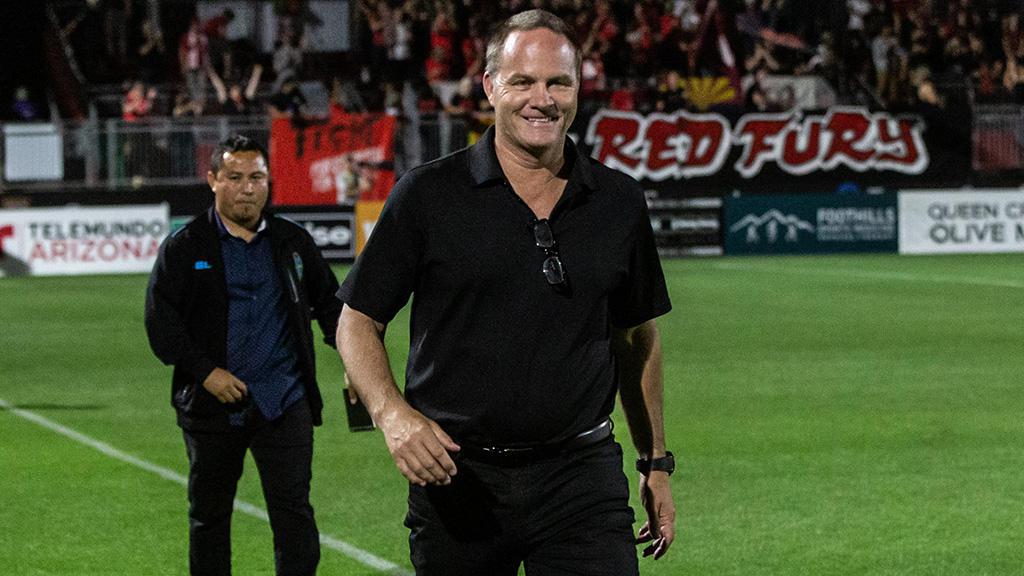 Once the USMNT all-time leading goalscorer before Donovan surpassed him, Wynalda can exact revenge of his own against the player who surged past him on the goalscoring charts. That said, he’s also well aware of the challenge ahead against a San Diego team that will be anxious to make a name for itself.

“It’s going to be a lot of energy coming from them [San Diego],” said Wynalda. “We have to be able to stay composed, to stay disciplined.”

Donovan vs Wynalda, San Diego vs. Las Vegas – could this potentially be the start of a rivalry?

“I hope so,” said Wynalda who later noted that former Lights FC players like Raul Mendiola, Irvin Parra, Eric Avila and Carlos Alvarez now play with Loyal SC. “For the entertainment value, it might be one of our better games on the schedule.”

“We’re going to start building rivalries organically as we go through the season,” he added, “but there’s no reason why this can’t be [one] as well.”

So what lies ahead for San Diego beyond the home-opener?

When discussing 2020 goals, Donovan’s quiet yet calculated confidence once again emerged as he brought up his ambitions of not only helping create the “best USL franchise in the league,” but also following through with having a lasting influence for his players.

“As long as we are treating people well and trying to positively impact them,” said Donovan, “we will get the soccer side right. There’s no question about that.”