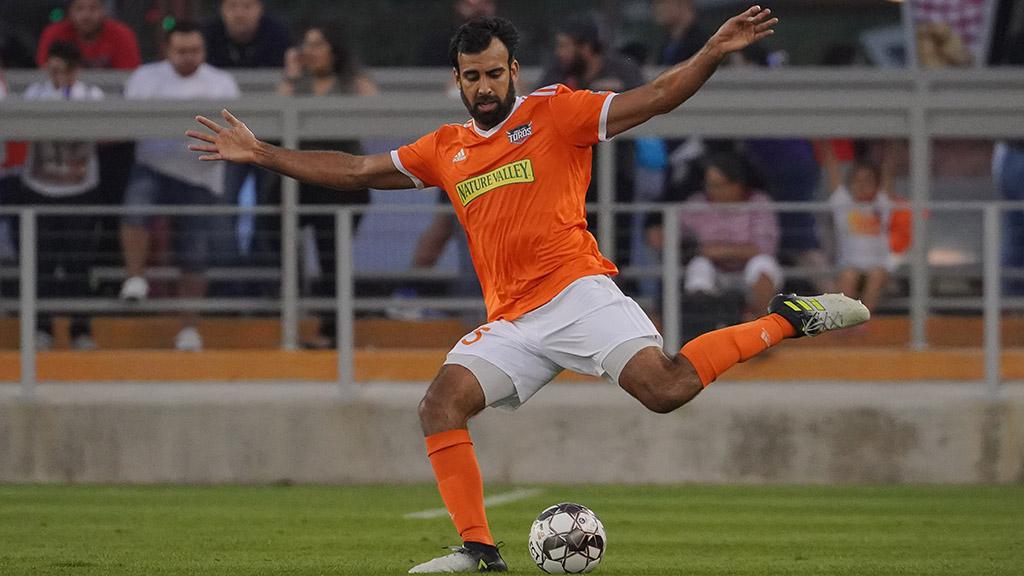 TULSA, Okla. – FC Tulsa announced on Tuesday a new addition to its backline with the signing of former Houston Dynamo defender Kevin Garcia. The 29-year-old has spent the last four seasons under contract with the Houston Dynamo organization, spending time with both the Dynamo in MLS and its USL Championship partner, Rio Grande Valley FC.

“The addition of Kevin Garcia to our back line immediately improves our team in all phases of the game,” said FC Tulsa Head Coach Michael Nsien. “Kevin is very comfortable in possession, which will allow our attacking players more time to take up more advanced positions, and also comes with great intangibles as an experienced professional. I envision Kevin’s communication and organizational skills will make him a leader for FC Tulsa, and he will elevate the team’s overall performance with his qualities.”

“I’m really excited to be joining FC Tulsa this year,” said Garcia. “I think with the rebranding and the talent surrounding this team, we’ll be able to turn heads this year. I’m ready to hit the ground running.”

A former standout at Villanova University, Garcia began his professional career in Europe, spending two seasons with IFK Luleå in the Swedish Division 1. A short stint in Ireland, followed by another half-season in Sweden preceded Garcia’s return to the U.S. in 2016 when he signed with the Toros for their expansion season in the Championship. As the Toros’ captain, Garcia led the league’s second-best defense, which allowed just 24 goals in 30 matches and earned the No. 2 seed in the Western Conference Playoffs.

HOUNDS SIGN TWO MIDFIELDERS: Pittsburgh Riverhounds SC announced on Tuesday it had signed midfielders Dakota Barnathan and Danny Griffin each to a one-year contract with a club option for the 2021 season.

Barnathan brings three years of USL Championship experience to the Hounds, having last played for Ottawa Fury FC in 2019 and Sporting Kansas City II from 2017-18. With Fury FC last season, Barnathan posted a career-high 24 games played and the first two assists of his professional career.

"We like Dakota’s technical qualities and his ability to read the game,” said Hounds Head Coach Bob Lilley. “We see Dakota playing more in the midfield for us, but he is also capable of playing in the center back position."

While Barnathan brings previous professional experience, Griffin will enter his rookie campaign with the Hounds. Before arriving in Pittsburgh, the Providence College product was drafted by Columbus Crew SC with the 49th overall selection in the second round of the 2020 MLS SuperDraft. With the Friars, Griffin was an All-Big East Third Team selection a season ago and made 80 appearances for the program, recording 13 goals and six assists.

“Danny is a player who works hard for the team and has good ideas in attacking areas,” Lilley said. “He has impressed since he has arrived in camp, and we are hopeful he will continue this progress throughout the season.”

Sorto made nine appearances and recorded two goals and two assists after joining Loudoun during the 2019 Championship season. Previously a member of D.C. United’s academy before signing his first professional contract with Loudoun United on June 27, 2019, the young forward had an impressive Championship debut as he scored both goals in a 2-1 victory over Atlanta United 2 on June 28, earning Championship Player of the Week honors.

“Sorto is a dynamic attacking piece from the Baltimore Armour. He scored some key goals for us last year, including two in his debut against Atlanta United 2,” said United Head Coach Ryan Martin. “I am excited to watch him continue to grow in his second year with us.”

Lefebrve was selected with the 21st pick of the 2020 MLS SuperDraft by D.C. United. A native of Ossun, France, Lefebrve was a member of the Girondins de Bordeaux academy in France from 2010-2016 before competing for Temple University collegiately. With the Owls, Lefebvre recorded 122 saves, seven shutouts and had a 1.21 goals-against average in 35 appearances.

“Simon is a skilled goalkeeper with great size and passing ability,” said Martin. “After spending all of preseason with the first team he showed a tremendous ceiling as a professional athlete and is excited to start his career here.”

“As a club, we believe strongly in development, progression and competition,” said SAFC Head Coach Alen Marcina. “These players have earned opportunities with the first team and have demonstrated the character and performance to contribute to the environment. This developmental process we know will allow for each player to have a positive impact on the culture and performance of San Antonio FC.”

Perez, Castro, Mercado and Bernal are all members of the SAFC Pro Academy, while Ramsey comes to SAFC from Solar SC in Dallas. Mercado and Bernal joined the academy in 2019 while Perez originally joined in 2017. Castro has been with the Pro Academy since its inception. All five players have appeared in preseason matches for San Antonio FC this season. Both Perez and Ramsey have received United States Youth National Team call-ups so far in their young careers.

“It is extremely important for us to be able to provide integrative opportunities for players from our Pro Academy and players who have been identified thru our Talent ID Department,” said SAFC Academy Director and Assistant Coach Nick Evans. “These young players are at different integrated stages with the professional team but have each shown that they can contribute to the squad and we look forward to their development over the next USL Championship season.”