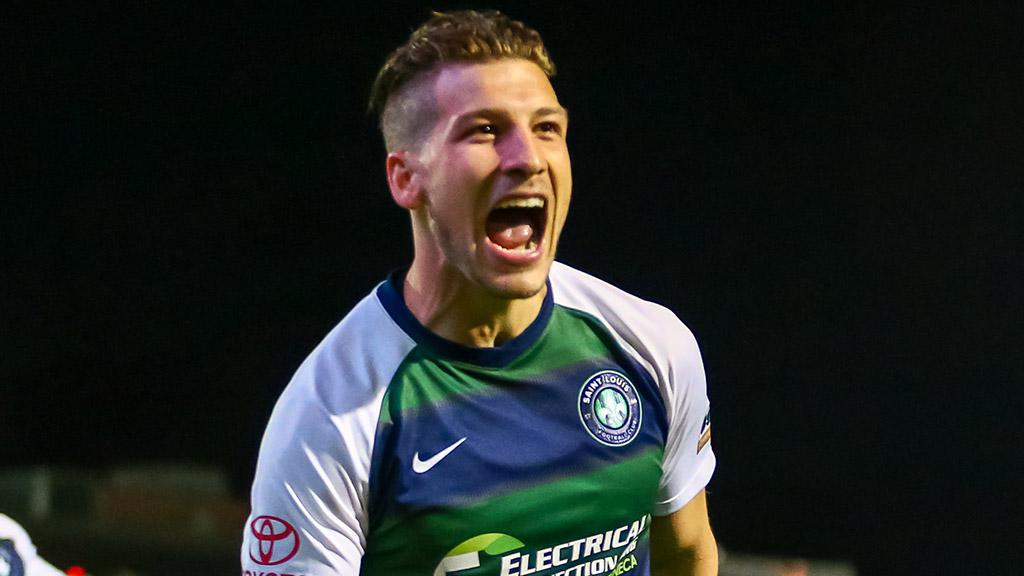 FENTON, Mo. – Russell Cicerone scored twice as Saint Louis FC rallied to a 2-1 victory against USL League One side Forward Madison FC on Saturday afternoon in a preseason contest at West Community Stadium.

Forward Madison opened the scoring in the sixth minute as Paulo Junior turned home a cross from point-blank range. STLFC responded with a clever free kick that Todd Wharton took quickly to Mour Samb, but the Senegalese forward’s shot was blocked. Wharton also had a chance from outside the penalty area that was palmed away by the trialist Forward Madison goalkeeper shortly after, while Sam Fink got on the end of Joaquin Rivas’ free kick but his header went narrowly high nine minutes before halftime.

Saint Louis had a big chance to level in first-half stoppage time as Samb was fouled in the penalty area, but Fink saw his penalty kick saved to keep Madison on top. The hosts continued to press for an equalizer in the second half, and it finally arrived with nine minutes to go when Cicerone earned a penalty and converted it himself. Cicerone then scored the winner in the 90th minute as the ball fell to him inside the penalty area following a turnover, allowing him to bury a finish for his fourth goal of the preseason.

“I told the guys at halftime that this is a game and I’m glad that [Forward Madison FC] gave us a game,” said STLFC Head Coach Steve Trittschuh. “To comeback like that should help us going into the first game. All-in-all, if you look at the stats we probably dominated, but it comes down to the score and we gave up a bad moment for them to get the goal. It felt like one of those days we couldn’t get the ball in the net but we kept creating chances and finally did.”

Sporting II started quickly and took the lead in the eighth minute when Portuguese winger Ze Pedro stepped up to curl home a free kick from the edge of the area. After a terrific save from SKC II goalkeeper John Pulskamp early in the second period, FC Tulsa equalized in the 62nd minute when Ariel Martinez finished from close range.

Dominik Resetar fired wide and Pulskamp produced another solid stop to keep the game level before Sporting II was afforded an opportunity to retake the lead from the penalty spot.

Felipe Hernandez won the ball high up the field and was brought down in the box, allowing Harris to convert the penalty and give his side the lead. FC Tulsa spurned one final opportunity to equalize late in the game, as Pulskamp was once again up to the task to claw away a close-range header in the 90th minute.

OKC ENERGY FC 4, FC TUCSON 0: Jaime Chavez, Ray Saari, Frank Lopez and Arun Basuljevic each found the back of the net as Energy FC closed out its preseason with a victory against USL League One side FC Tucson at the Kino Sports Complex.

Chavez capped off a prolific preseason with his seventh goal in eight games, putting the Greens ahead early off a feed from Jose Hernandez. Saari then opened his Energy FC account with a goal off an assist from Basuljevic to double the lead heading into the halftime break.

Shortly after the second-half restart, Basuljevic found Lopez for his second assist of the game, allowing the Cuban forward to fire home a a blast from distance. Basuljevic then wrapped up the scoring with a goal of his own just a few minutes later after driving into the penalty area before firing home through traffic.

INDY ELEVEN 4, UNIVERSITY OF INDIANA 2: The Eleven wrapped up their preseason as Ayoze scored twice from the penalty spot to down the Hoosiers at the Grand Park Events Center and Sports Complex in Westfield, Ind.

Indy had previously taken a 5-0 win earlier in the day against the University of Indianapolis that saw five different players find the net and Conner Antley record a goal and assist. The Eleven got out to a good start against the Hoosiers, too, as Ayoze converted from the spot in the seventh minute after Andrew Carleton was brought down in the penalty area. Carleton then hit the crossbar seven minutes later, but while both sides had chances in the remainder of the half, Indy’s lead held until the break.

The second half saw the chances that went wanting in the first half converted by both sides early on. Indy doubled its advantage in the 58th minute when Cam Lindley scored from close range after Nick Moon’s initial header had been blocked, but then IU hit back with two goals in three minutes to level things up. However, Moon drew Indy’s second penalty kick of the match in the 64th minute, and Ayoze converted once again from the spot to regain the lead for the Eleven.

Indy midfielder Tyler Gibson doubled the side’s advantage in the 75th minute with a touch on of Carl Haworth’s solid cross into the area from the right sideline, and that proved enough to see out the contest.

LOUISVILLE CITY FC 2, UNIVERSITY OF KENTUCKY 1: A pair of goals off free kicks by Cameron Lancaster and Niall McCabe rallied LouCity to victory against the Wildcats at the Wendell and Vickie Bell Soccer Complex on Saturday night.

UK took the lead in the 15th minute when Khalil Elmedkhar picked off a pass in LouCity's defensive third which led to a two-on-one situation the Wildcats were able to convert, and the hosts carried their lead to the halftime break.

LouCity's best shot to score in the early second half was a series of passes that led to a free shot for Lancaster in the 52nd minute. Antoine Hoppenot's pass into the box found Lancaster who turned and sent a shot just outside the frame.

Lancaster found the back of the net with 11 minutes to go, however, as a foul just outside the penalty area saw the English forward curl a shot over the defensive wall and into the right side of the goal. LouCity then grabbed victory on a similar opportunity, with McCabe this time stepping up to send a whipped shot over over the left side of the wall and into the upper-corner for the game-winner.