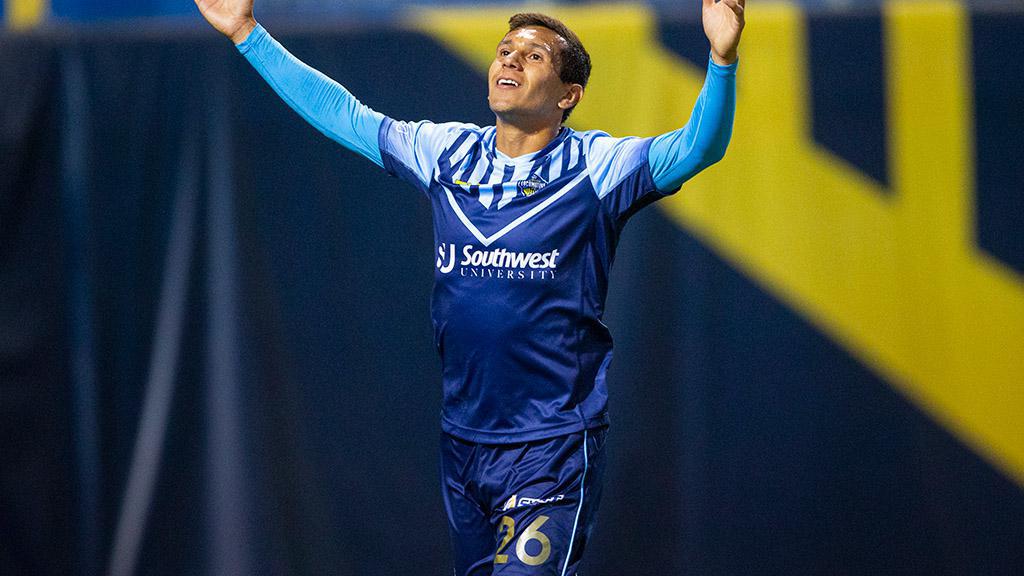 EL PASO, Texas – El Paso Locomotive FC announced on Tuesday it had extended its loan agreement with FC Juarez to keep Josué Aarón Gómez with the club through the 2020 USL Championship season, pending league and federation approval. Gomez has been on loan from FC Juarez since the beginning of May 2019 and recorded eight goals in Locomotive FC’s inaugural season.

“We are very happy to have Aarón back with us for a second a year,” said Locomotive FC Head Coach Mark Lowry. “We want to thank our friends at FC Juarez for helping make this happen and look forward to seeing Aaron score more goals for us in 2020.”

The El Paso native was a key contributor during the second half of the 2019 campaign to help Locomotive FC on its historic run to the Western Conference Final, including scoring the game winner in a 3-0 victory against Sacramento Republic FC in Locomotive’s Western Conference Semifinal. Gómez joins fellow local product Omar Salgado, as well as newcomers Saeed Robinson and Marios Lomis in the attack.

HOUNDS MAKE TWO ADDITIONS: Pittsburgh Riverhounds SC announced on Tuesday it had signed defender Skylar Thomas and goalkeeper Danny Vitiello each to a one-year contract with a club option for the 2021 season.

Thomas comes to Pittsburgh after playing one season for Valour FC of the Canadian Premier League. He started 21 of his 22 appearances with the club. He previously played four season in the USL Championship, spending two seasons with Toronto FC II and then two more with the Charleston Battery. Thomas has made 95 appearances and recorded five goals in in the Championship overall.

“Skylar is an experienced defender in our league,” said Hounds Head Coach Bob Lilley. “He is exceptional in the air and a very strong 1-v-1 defender who we are excited to bring on to our team.”

Vitiello, meanwhile, spent his rookie 2019 season with Nashville SC as he served as the club’s third goalkeeper behind 2019 USL Championship Goalkeeper of the Year Matt Pickens and Connor Sparrow. The Massapequa, New York native had previously competed collegiately at the University of Albany, where he made 60 appearances and posted a 0.98 goals-against average, 78.4 save percentage and recorded 24 shutouts.

“Danny is a young goalkeeper with good habits and a bright future,” said Lilley. “He is a very capable shot-stopper who also has a good ability to play out of the back with his feet.”

“Wes is a versatile defender that we know well,” said LouCity Head Coach and Sporting Director John Hackworth. “While he has primarily played as a right back or left back during his professional career, we thought that with his physical abilities that he could make the transition to be a central defender.  During the matches in Utah, he played well as one of our left center backs.  In addition, he is a person of character who we feel will fit well with our culture.”

“We’re excited to welcome Brandon Williamson back as a local guy and former academy player. Not only is he an athletic two-way player, he’s also smart, technically gifted and has a great range of passing. I think he’ll come in and immediately contribute in the central midfield area,” said Loudoun United Head Coach Ryan Martin. “Allexon had some great moments for us last year and he’s another young academy product that we’re excited to have because he has a bright future. He’s a talented kid who can play anywhere in the backline and we’re happy to have him back.”

Williamson joined the D.C. United Academy aged 12 years old, and after six years signed collegiately with Duke University. During his time with the Blue Devils, Williamson played in 52 games and recorded four goals and four assists in more than 4,000 minutes of action.

In 2018, Williamson was named to the All-ACC Second Team, United Soccer Coaches All-South Region Third Team, and was voted Duke’s Most Valuable Player.

Saravia made eight appearances for Loudoun United while in the D.C. United Academy before signing his first professional contract with the USL Championship side on July 1, 2019. Throughout the 2019 season, the 18-year-old made 12 appearances, totaling 698 minutes. He recorded 21 clearances and made eight interceptions.

Prior to his professional career, the Alexandria, Va. native spent three years in the D.C. United Academy and scored six goals in 56 appearances. In addition to his time with the academy, Saravia was named to the El Salvador U-17 squad for the 2017 Concacaf U-17 Championship in Panama.