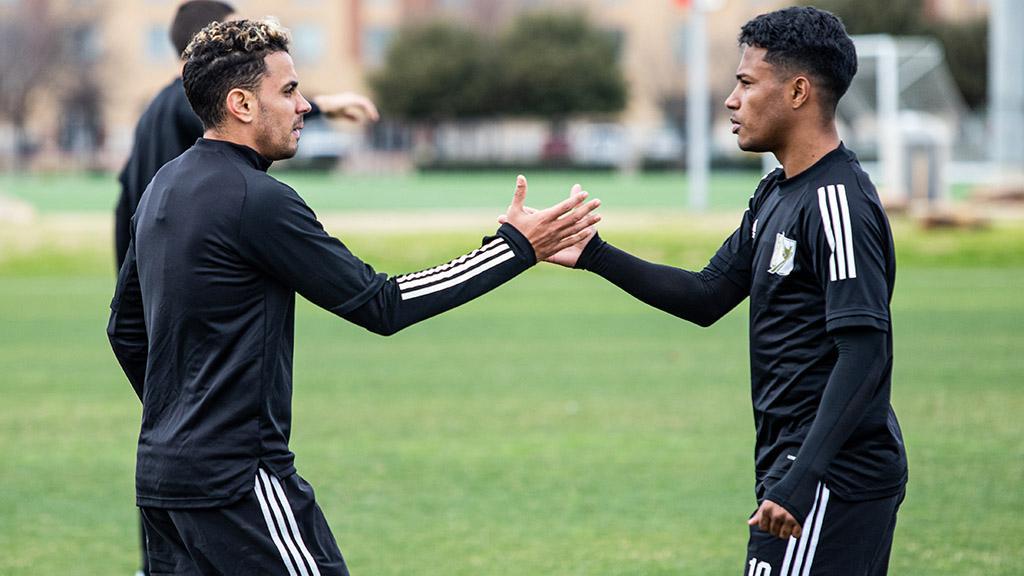 FRISCO, Texas – Panin Boakye notched his first goal and assist in FC Tulsa’s colors as he led the side to a 3-1 victory against defending USL League One title-holder North Texas SC in a preseason scrimmage on Tuesday afternoon at the FC Dallas Training Center.

The outing was a positive one from FC Tulsa Head Coach Michal Nsien’s perspective, with the attacking style North Texas produced giving his side a solid test of their defensive structure.

“I would say from the beginning North Texas came out and were very comfortable in possession and I knew they would be so I thought it would be a good opportunity for us to work on our front press,” said Nsien. “They broke us a few times early, then we finally got the rhythm and got our positioning correct. We were difficult to break down from that point and eased into the game. I would say we got our rhythm after 12-15 minutes and after that point, we were very comfortable.”

North Texas struck first in the 16th minute as United States U-17 international Dante Sealy slotted a close-range effort into the bottom right corner. Tulsa responded seven minutes later, however, as Boakye – who made eight appearances for Tulsa last season in the Championship – notched his first goal for the side.

Boakye then played provider as FCT took the lead 11 minutes before the halftime break, setting up Brazilian forward Marlon for a headed finish for his first goal this preseason. Nigerian international Mfon Udoh then notched his first goal in Tulsa’s colors in the 73rd minute as he tucked away a cross from Rodrigo Da Costa to seal the victory.

“It feels so good to start the season off on the right foot and be ready for the season coming,” said Udoh. “So, I really feel good, and I feel happy.”

LOUISVILLE CITY FC 4, FORWARD MADISON FC 0: Cameron Lancaster notched another pair of goals as LouCity scored all four of its goals in the first half against USL League One side Forward Madison FC in the defending Eastern Conference title-holder’s penultimate preseason outing.

Lancaster opened the scoring in the ninth minute when he found himself with the ball in the penalty area after a nifty corner kick by Oscar Jimenez. Lancaster spun and shot, but his shot was blocked. When the rebound found his foot again, Lancaster buried it into the bottom-right corner of the net.

Then two minutes later Lancaster collected his second when he put home the rebound after Abdou Thiam's shot was blocked by Madison’s goalkeeper. The ball deflected off the keeper straight to Lancaster's head for an easy finish.

“Having Cam back is huge for us because we have one of the best goal-scorers this league has ever known,” said LouCity Head Coach John Hackworth. “And for our club, specifically, he has been tremendous. When you have a goal scorer like him, who just finds a way to put the ball in the back of the net, all the other phases of the game that we try to play at such a high level become – it's not so much that they are easier, but if you can execute in that one phase and then take care of all the rest, it makes for a very solid team.”

Louisville’s pressure continued to hound FMFC players and in the 20th minute Paolo DelPiccolo added a third for the hosts with a low shot from the top of the penalty area. Thiam then notched a fourth two minutes later with a finish to the left corner of the net from the right side of the penalty area.

CHARLESTON BATTERY 4, CHATTANOOGA RED WOLVES SC 1: Arthur Bosua scored a pair of goals to lead the Battery past USL League One side Chattanooga Red Wolves SC on Tuesday morning with Romario Piggott and Rennico Clarke also finding the net for the hosts.

Piggott opened the scoring in the 14th minute when he latched onto a pass from Dante Marini and put home a finish, but the Red Wolves leveled from the penalty spot nine minutes later. Charleston had a chance of its own to convert from the spot just past the half-hour mark only for the Chattanooga goalkeeper to make the save, but three minutes before halftime Clarke put home a powerful header off a corner kick by Robbie Crawford to regain the lead.

After coming on as a substitute, Bosua then starred in the second half, first converting from the penalty spot in the 70th minute after being brought down in the penalty area. The South African forward then added his second of the game with 12 minutes to go to wrap up a solid performance for the Battery.