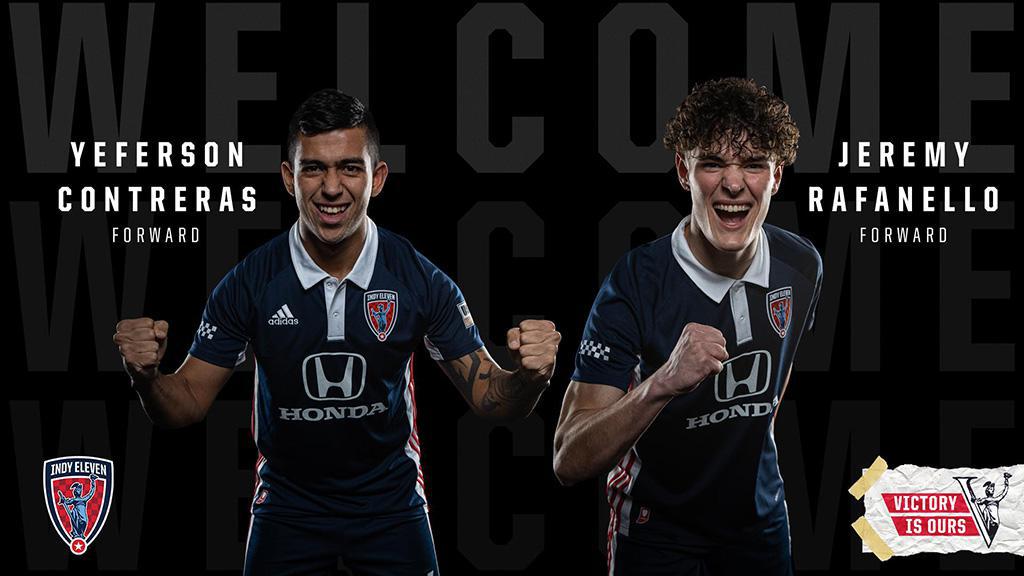 INDIANAPOLIS – Indy Eleven announced on Wednesday the arrival of two new forwards for the 2020 USL Championship season with the signing of U.S. Youth International Jeremy Rafanello and the addition of Colombian Yeferson Contreras on loan from America de Cali.

“We’re really excited to be signing two extremely talented young strikers. It’s not every day that you get to coach the talent that these guys have and we’re looking forward to helping them develop in their career,” said Indy Head Coach Martin Rennie. “Fans are going to be excited for what these players can bring to the table.”

Contreras came through América de Cali’s Under-17 system in 2017, ending the season as its league’s goalscoring leader. The following season, Contreras graduated to América’s Under-20 squad, where he had another impressive showing in regular season and national tournament play.

Contreras’ stellar performances earned him a call-up to América’s first team at the start of the 2018-19 season, where he made two appearances in the Colombian top flight before going on loan to Orsomarso SC in the Second Division in August 2019.

“I'm very happy to have signed with such an important club like Indy Eleven. I want to do everything I can for the club to be successful and reach the USL Championship Final,” Contreras said. “Like every forward, my aspiration is to be the leading goal scorer, but my ultimate goal is to help the team anywhere I can so that we can lift a trophy at the end of the season.”

Rafanello, meanwhile, returns stateside after most recently playing for Danish club FC Helsingør. A New Jersey native, the 19-year-old is a product of Philadelphia Union’s youth academy and previously made two appearances in the USL Championship for the Philadelphia Union II as a USL Academy signing in 2018. Rafanello was called up to the United States U-19 National Team in May 2018 for the Slovakia Cup.

“I'm very excited to get the ball rolling here with Indy Eleven,” said Rafanello, who also competed in USL League Two for Reading United AC. “I'm looking forward to learning from the veterans on the squad and getting what should be a great season started.”

NCFC MAKES DEFENSIVE ADDITIONS: North Carolina FC added to its defensive corps with the signings of defender Akeem Ward and goalkeeper Paulo Pita. Ward arrives after competing most recently for fellow Championship side Birmingham Legion FC during the 2019 season.

Ward was originally selected with the No. 14 pick of the 2019 MLS SuperDraft after a standout career at Creighton University. The 24-year-old made one appearance for D.C. United as well as spending time on loan with USL Championship sides Loudoun United FC before joining Legion FC midway through the campaign. Ward recorded 23 appearances for Loudoun and Birmingham, recording 1,924 minutes while recording 31 interceptions and 51 clearances.

“I’ve watched Akeem over the last year and a half,” said NCFC Head Coach Dave Sarachan. “He can play on the left or the right, which is a big plus for players to have that kind of versatility. He can keep up with the pace of the game with his speed, so I think he’s a guy that adds good experience who will push to see minutes.”

Pita was selected in the in the second round of the 2020 MLS SuperDraft in January by Los Angeles FC after competing for both the University of Charleston and Marshall University collegiately. The Brazilian won a national championship and earned First Team All-America honors during his two-year stint with the University of Charleston at the NCAA Division II level before transferring to Marshall. With the Thundering Herd, Pita helped the side win the Conference USA regular season and tournament titles in 2019 as it achieved a national ranking of No. 11, a program record.

“We kept an eye on Paulo throughout his senior year, and when we had the ability to bring him, we took advantage,” said Sarachan. “He’s pretty mature for a first-year player out of college. His starting point is a little bit further along than many. Technically, he’s got a good presence and demeanor in goal. He has a lot of components that can help him develop into an outstanding goalkeeper.”

Prieur was selected in the Second Round (47th overall) of the 2020 MLS SuperDraft by Columbus Crew SC but did not sign a contract with the club. The 22-year-old completed his collegiate career at Saint Mary’s College in 2019 before declaring for the draft.

After redshirting during his freshman year in 2015, Prieur went on to make 55 appearances for Saint Mary’s across the next four seasons, posting a 0.73 goals against average and 32 shutouts.

Prieur enjoyed a stellar 2018 season, his first as a full-time starter, conceding just eight goals in 20 games to go along with 14 shutouts while leading the Gaels to the WCC Championship for the second time in program history.