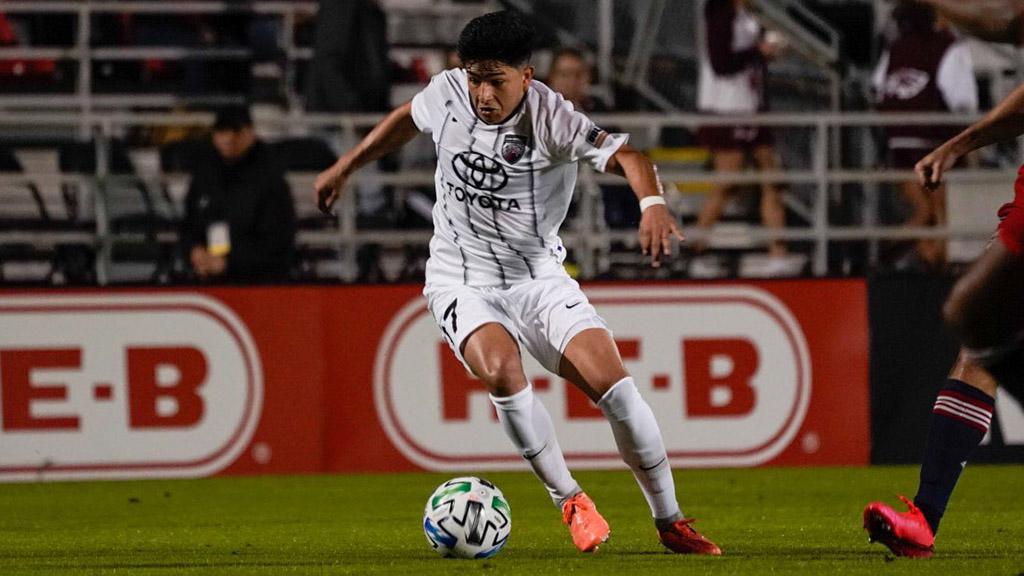 SAN ANTONIO – The final 10 minutes didn’t play out the way San Antonio FC might have hoped, but that couldn’t overshadow the excitement produced by the club’s talented youngster Jose Gallegos during Wednesday night’s scrimmage against Major League Soccer’s FC Dallas at Toyota Stadium.

The 18-year-old not only bagged his third goal in as many preseason outings this spring -  a highlight-reel finish that put the hosts up by two goals in the second half – but put in a performance that made him stand out in a game that also featured U.S. international Reggie Cannon in a largely full-strength FCD lineup.

an 18-yr-old in USL is the best U20-eligible attacking midfielder playing on U.S. soil https://t.co/Fh9iHu3nCP

Gallegos had a limited impact in his first season as a USL Academy signing for SAFC, notching one goal and one assist in 600 minutes over 14 appearances. This performance only goes to show the potential that he could have to impact San Antonio’s season this year, and reflects the step forward his game has taken since the end of the 2019 campaign.

“He brings craft to our team which not a lot of teams have,” said SAFC midfielder Connor Maloney, who had previously opened the scoring from the penalty spot. “He’s young, he has a lot of potential and he has a bright future ahead of him. He was working hard, like everyone was, and to see that in a young kid like that is very positive.”

There’s still plenty for the San Antonio native to prove when the regular season comes around, of course, and there’s also the question of whether SAFC will add him to the squad on a professional deal. Currently Gallegos is signed to a USL Academy contract and is committed to North Carolina State this fall after he graduates from high school in the spring.

But it’s hard to not look at the latest talent to emerge from the SAFC Pro Academy and think he’s got a great future in San Antonio’s colors ahead of him.

“Jose is an extremely talented player and has earned the opportunities he’s been given, and he’s making use of those opportunities,” said SAFC Head Coach Alen Marcina. “We had a number of our academy kids come into the match, and they did very well. We’re very proud of them and their progression.”

CARLETON FITTING INDY: Indy Eleven bagged its second preseason win of the spring on Wednesday afternoon as Andrew Carleton notched a second goal since arriving on loan at the club from Atlanta United FC two weeks ago to down fellow Championship side Saint Louis FC 1-0 at Grand Park.

The former U.S. U-17 National Team standout was active throughout his 60-minute stint with the side’s starting lineup against STLFC and notched the only goal of the game early in the second half with a close-range header.

Carleton and others could have added to the final score, with Russell Cicerone proving a threat for Saint Louis FC. That sharpness in front of goal is likely to come as preseason continues, with both sides coming away from the contest with an eye on the opening weekend of the season in just over three weeks.

“It’s preseason, so there’s always room for improvement, and I thought that maybe we could have taken some more of our chances better and made the game a little more straightforward,” said Indy Head Coach Martin Rennie. “It was a good win and it gives us a good gauge against a team from our league that we think is going to be a solid competitor in the Eastern Conference.”

CHAPA BACK IN EL PASO: One of the goals for El Paso Locomotive FC upon its arrival was to provide a platform for talented players in the region. That was certainly in evidence in the club’s inaugural season through the play of Louis “Chapa” Herrera, who made 28 appearances as the side reached the Western Conference Final of the 2019 USL Championship Playoffs.

The midfielder’s play also attracted attention from elsewhere, sending Herrera to train with Major League Soccer powerhouse Los Angeles FC over the past week, and while the 23-year-old returned to El Paso this week to spend a second season with Locomotive FC it illustrated the opportunity the club – and others like it in new markets around the country – can provide moving forward.

“I am very proud that Chapa had the opportunity to spend a week with LAFC, who on last season’s form were the best team in MLS,” said Locomotive FC Head Coach Mark Lowry. “It’s a credit to the work and application that Chapa displayed last season, his growth in his first year as a pro was tremendous. For that to be recognized is fully deserved and a is testament to Chapa and the culture we have created here in El Paso.”

ROWDIES’ MURPHY BRINGS HEATER: Footage from closed-door scrimmages in preseason can sometimes be hard to find, but after the Twitter report of Kyle Murphy’s goal for the Tampa Bay Rowdies against Orlando City SC on Wednesday night, we were all hoping to get a visual on the finish.

On Thursday afternoon it arrived, and it didn’t disappoint.

Murphy and the Rowdies will next see the field – and give their fans a first look at the new squad – on Saturday when they host the Montreal Impact in the Suncoast Invitational at Al Lang Stadium at 7 p.m. ET.