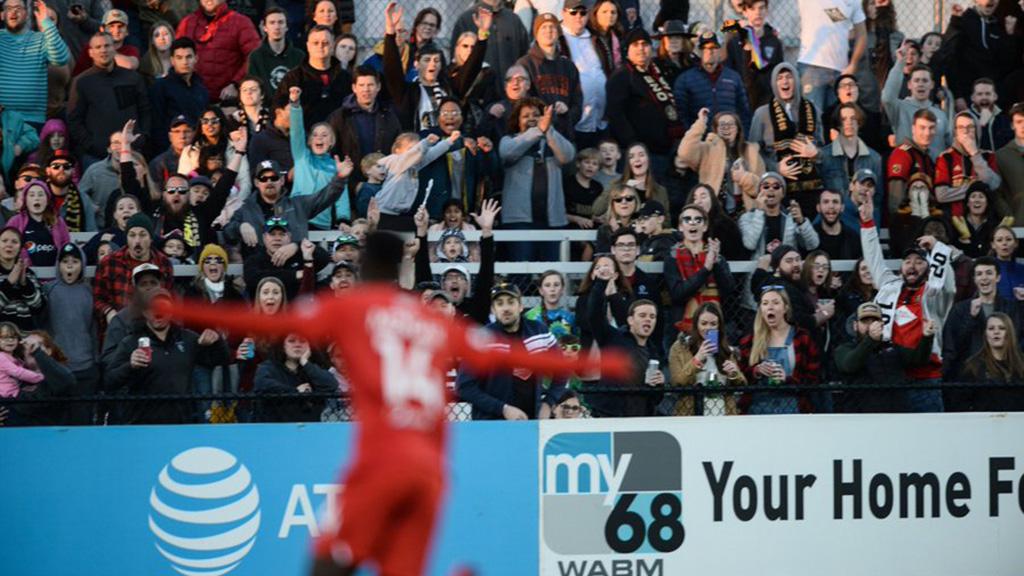 BIRMINGHAM, Ala. – On a banner day in the club’s short history, Birmingham Legion FC welcomed a BBVA Field-record crowd of 6,722 on Saturday afternoon for its 2020 preseason opener against Atlanta United FC.

And while the visitors claimed the upper hand in an exciting 3-2 result thanks to a stoppage-time goal by Mattheus Rosetto, the day provided a glimpse of what Legion FC fans can expect from their club this season.

“I’m pleased with the whole group,” said Legion FC Head Coach Tom Soehn. “Obviously, I would’ve liked to come out with the result, but this isn’t result time. This is more about getting the experience, getting preseason under your belt, and sticking to the process over the results. I’m happy with everything that happened, and our fans came away with a pretty good show today, so I’m pleased with that.”

Having opened preseason camp just two weeks ago, the hometown squad was still working toward full fitness, but energized by the packed house Legion FC went blow-for-blow with a lineup full of bona fide MLS stars from Atlanta. The visitors took the lead just before halftime through Argentine standout Ezequiel Barco, but aside from that one blemish Birmingham goalkeeper Matt Van Oekel looked sharp in recording three saves in the first 45 minutes.

Legion fans got to see all the club’s new signings take the field for the first time, and shortly after the halftime break one of those – 2019 Championship All-League selection Neco Brett – pulled Birmingham level from the penalty spot after being brought down in the area.

Both sides made full lineup changes in the second half, which meant a debut for Legion FC youngster Jaden Servania along with action for the club’s preseason trialists. Atlanta regained the lead on a penalty of its own midway through the second half when former Phoenix Rising FC forward Adam Jahn converted, but with 10 minutes to go Legion FC leveled again when forward Rudolf Mensah showed off his speed to get in behind the United defense, latching onto a through ball from Daigo Kobayashi before slotting home.

Atlanta’s Rosetto capped the entertainment in the third minute of stoppage time, however, twisting to find space before shooting home to give the visitors the win.

Greig opened the scoring in the 15th minute as he got on the end of a corner kick to head past Memphis goalkeeper Jimmy Hague. The next chance for the hosts fell to an Academy trialist as Richard Bryan found him at the back post but a first-time volley found the side netting in the 26th minute.

A pair of Academy trialists combined to double Saint Louis’ advantage in the 56th minute before Memphis captain Marc Burch off a free kick that bent around the defensive wall and beat diving STLFC goalkeeper John Berner. Saint Louis had a chance to add to its lead late on when Russell Cicerone got in for a one-on-one chance against Memphis goalkeeper Jim Barkei, but his shot trickled wide.

FC TULSA 2, OKLAHOMA WESLEYAN UNIVERSTY 0: Rodrigo Da Costa and Dario Suarez were both on target as FC Tulsa opened its preseason slate with a victory at the Titan Sports Complex on Saturday afternoon.

Tulsa dominated the opening half, but it took until the 43rd minute for the side to make the breakthrough after recording nine shots in the opening frame. Da Costa broke the deadlock, beating a defender before being dragged down inside the penalty. The Brazilian, who signed a new multiyear contract with the club this week, coolly slotted the penalty kick into the side netting.

After wholesale changes at halftime, Tulsa doubled its lead midway through the second half as Suarez found the net. A darting run from Panin Boakye down the right side created space, and he then laid the ball off to Ariel Martínez. The ball then fell to Suárez, who dribbled past a defender and finished to the far post for the insurance goal.

It took the Hounds 13 minutes to jump on the scoreboard. Fernandes, a rookie signee, potted home a shot to put the Black and Gold up 1-0 early. Meanwhile, Velarde blasted in a shot from about 20 yards out in the 68th minute, stemming from a free kick. The midfielder gathered a short pass from Kenardo Forbes before firing a shot past the Duquesne goalkeeper.

“There’s a lot to work on,” said Hounds assistant coach Dan Visser. “A lot of new guys. I think it started messy, but the first group got better as the half wore on. I think the second group took a step forward from the first group.”

OKC ENERGY FC 2, UNIVERSITY OF CENTRAL ARKANSAS 2: Jaime Chavez and Arun Basuljevic scored the opening and closing goals of the contest in an entertaining contest at Taft Stadium.

After a goalless first half that saw OKC’s Rafael Garcia come closest to scoring with a curling effort from 20 yards, the Greens opened the scoring through Chavez’s third goal of the preseason. Ray Saari’s feed was controlled by Chavez, who smashed the ball into the side netting from the top of the box with his left foot.

UCA bounced back with two goals in quick succession against the run of play to take the lead, but Energy FC continued to press and went close on several occasions. OKC was unable to find the back of the net before the 90 minutes were up, but as OKC looked to get its second group of players more minutes, the teams decided to play an additional 15 minutes. With the final play of the additional session, Kodai Iida got on the end of a through ball down the left channel, took a touch into the box towards the end line, and cut back for Basuljevic to place into an open goal from 10 yards out.