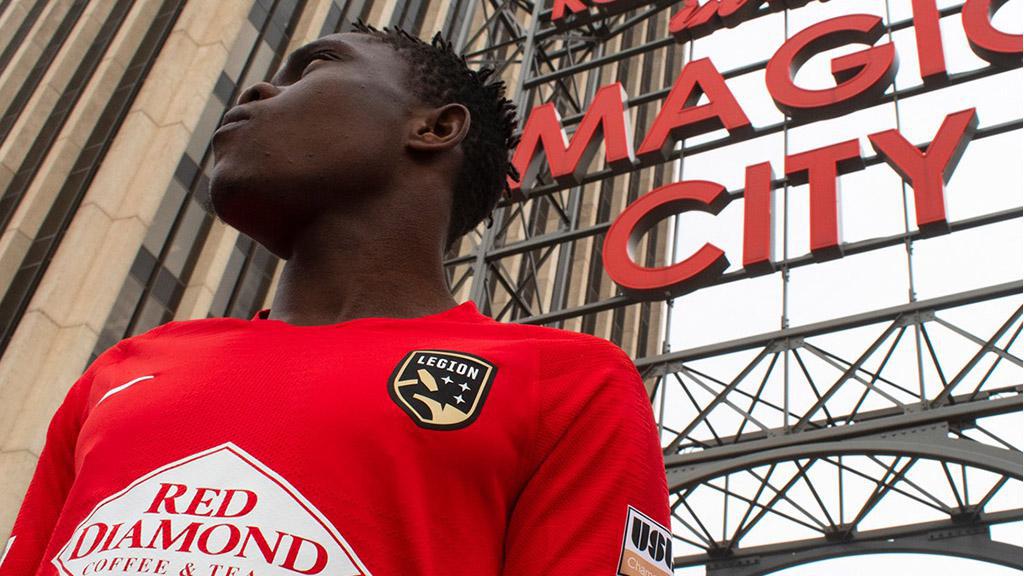 BIRMINGHAM, Ala. – There will be a few firsts on display for Birmingham Legion FC this Saturday afternoon as it takes on Major League Soccer’s Atlanta United FC in its first preseason game of 2020.

Leading off, the club will debut its new red “Sweet Home” uniforms that were unveiled as Legion FC’s third kit for the 2020 USL Championship season.

Then there will be the chance for newcomers like 2019 USL Championship All-League selection Neco Brett to make a good first impression on the likely sellout crowd expected to be in attendance at BBVA Field.

After reaching the USL Championship Playoffs in the club’s inaugural season, Brett is being looked at as a key figure to provide the scoring punch needed to push the side forward this year. For his part, the Jamaican was happy with the way things were going in the early days of camp.

But maybe the most intriguing first for Saturday could involve the youngest player on Legion FC’s squad, Jaden Servania. The Birmingham native was unveiled as the club’s first USL Academy signing on Thursday and could see action against Atlanta. Having previously played for the Houston Dynamo Academy, the 18-year-old forward has produced some impressive highlights in his youth career, including for the Puerto Rico U-20 National team.

U19 @DynamoAcademy player, @JadenServania, scored goals for @FutbolPR in the @Concacaf U20 Championships today. He has set @IMGAcademy on this past week!

Jaden Servania has been on in Florida!

Two more goals today give the @DynamoAcademy striker total for at #CU20. pic.twitter.com/0iCmSvXqyF

Legion FC’s hope is that Servania will be the first of many local products to become part of the club’s set-up. Having seen Birmingham natives like current Bayern Munich defender Chris Richards and Servania’s older brother Brandon – who this past Saturday made his United States Men’s National Team debut against Costa Rica – join MLS Academy programs, Legion FC President and General Manager Jay Heaps is hoping the club can now keep potential homegrown talent local as the club provides a path to the professional ranks.

“This is a unique opportunity for us to add a talented, young player to our roster,” said Heaps as the club welcomed Servania to its ranks. “Jaden has excellent potential, and he will continue to develop in our first team environment.”

OCSC'S FORRESTER ON THE MARK: Orange County SC was edged out 2-1 by Major League Soccer’s New York City FC in a preseason scrimmage on Tuesday afternoon on the campus of Cal State Fullerton, but OCSC midfielder Harry Forrester produced a highlight-reel finish for the club’s tally.

Part of a returning Orange County midfield that has also added former Reno 1868 FC standout Seth Casiple this offseason, the former Rangers FC player didn’t put up spectacular numbers in his first season in the United States as he recorded three goals, six assists and 39 key passes in 31 appearances.

If there’s more of that to come when the regular season arrives, though, it could be a very entertaining season at Championship Soccer Stadium.

RISING FC FANS IN REGULAR SEASON FORM: It wasn’t at their familiar confines of the south end of Casino Arizona Field, but Phoenix Rising FC supporters groups The Red Fury and Los Bandidos certainly made their presence felt on Tuesday night when the NHL’s Arizona Coyotes hosted Phoenix Rising FC night during their game against the Edmonton Oilers.

After posting a 30-save shutout, Coyotes goaltender Antti Raanta gave a postgame shoutout to the fans for their vocal support throughout all three periods.

Big things to come for @AzRabids! @ARaanta31 with the postgame shoutout for the supporter group making noise throughout the game. @ArizonaCoyotes x @PHXRisingFC pic.twitter.com/6y8Nra9hvk

Raanta’s Rising FC counterpart Zac Lubin was one of two players – midfielder Jon Bakero being the other – that attended the game on behalf of the club and provided plenty of behind the scenes action on social media. That included both players taking part in the pregame two-touch kickaround that is commonplace for teams around the NHL.

Rising FC and its fans will be back in their traditional surroundings next Saturday, February 15 when they take on Columbus Crew SC to kick off the 2020 Visit Tucson Sun Cup.