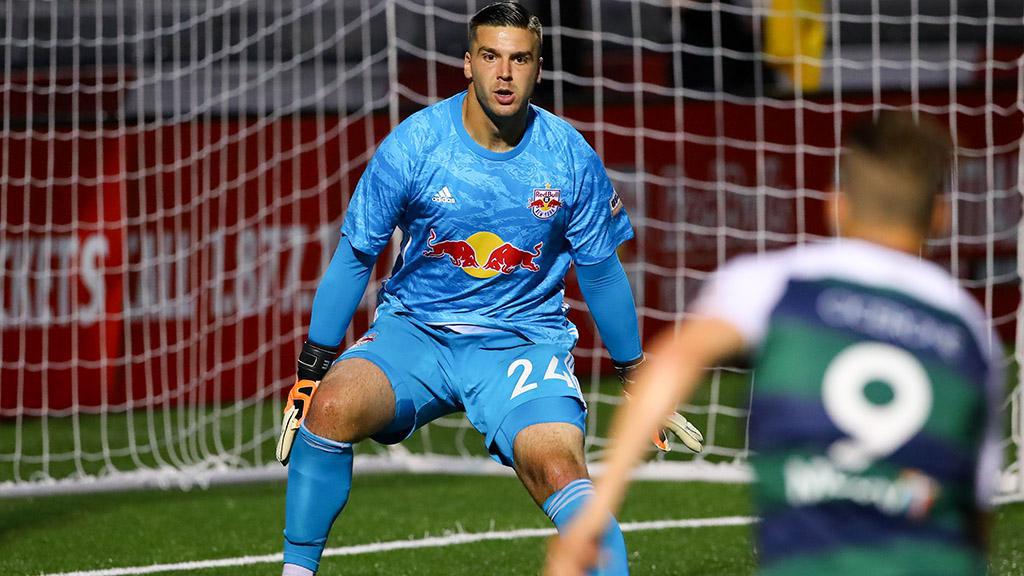 ST. PETERSBURG, Fla. – The Tampa Bay Rowdies added a new face to their goalkeeping corps on Tuesday with the signing of Evan Louro ahead of the 2020 USL Championship season. Per club policy, further contract details were not disclosed.

Louro is a familiar foe for the Rowdies, having served as starting goalkeeper for the New York Red Bulls II since 2017. In three years with the Red Bulls, Louro made 79 starts and played more than 7,000 minutes, making him one of the most experienced goalkeepers in the Championship, despite having only turned 24 this past Sunday.

“Evan is a goalkeeper that has always been a bit of a thorn in our side,” said Rowdies Head Coach Neill Collins. “As we’ve seen in our games against him through the years, he’s a great shot stopper and he’s he organizes his back line well. We’re excited to have him on our side now because we feel he’ll fit well within our system.”

Louro is a New York metro area native that came up through the Red Bulls system. He joined the club’s academy in 2008, helping the U16s to an undefeated record and U.S. Soccer Development Academy championship in 2012. While attending the University of Michigan, Louro played for the Red Bulls U23s in USL League Two before signing an MLS contract with the Red Bulls as a Homegrown player in 2017.

“I’m super grateful to be here,” said Louro said. “I’ve had the privilege to play against the Rowdies many times and it was always my favorite trip of the year. The fans are second to none, the stadium being right next to the water is second to none. Neill really made me feel wanted and welcomed and all the guys have been welcoming so I’m just really excited to get started.”

DOVER RE-SIGNS WITH HOUNDS: Pittsburgh Riverhounds SC announced on Tuesday it had re-signed defender Jordan Dover to a one-year contract with a club option for 2021. The Guyana international will enter his third season with the Hounds in 2020.

“We’re very excited to bring Jordan back this year,” said Pittsburgh Head Coach Bob Lilley. “His intelligence on the field and presence in the locker room have been a big part of our success the last two seasons, and we fully expect him to help push the organization forward in 2020.”

Dover has started 54 of his 55 career appearances with the Hounds, becoming a regular feature of the team’s starting lineup. Over two seasons in Black and Gold, the outside back has amassed 92 interceptions and 73 clearances, while also notching three goals and two assists for the club.

The Ajax, Ontario, native’s performances grabbed the attention of the Guyana National Team, for which he is eligible through family ties, and saw him earn selection for the 2019 Concacaf Gold Cup. Dover made two appearances at the tournament, making his international debut against the United States on June 18.

ENERGY FC BRINGS BACK IBEAGHA: OKC Energy FC announced on Tuesday it had re-signed defender Christian Ibeagha for his third season with the club.

“I’m definitely excited,” said Ibeagha. “It’s been a long offseason, but it’s great being back with the group. We underachieved the past two seasons, but we’re back, ready to work hard and ready to accomplish our goals.”

Ibeagha, a native of Port Harcourt, Nigeria, made 60 appearances for Energy FC, including 57 starts, over the past two seasons, winning 74 percent of his tackles.

“Christian is a player that the city and club obviously know,” said Energy FC Head Coach John Pascarella. “It’s good to have a local guy here. He’s talented, he knows the team and league, and he’s played a lot of minutes, so it’s good to have a guy with that type of experience.”