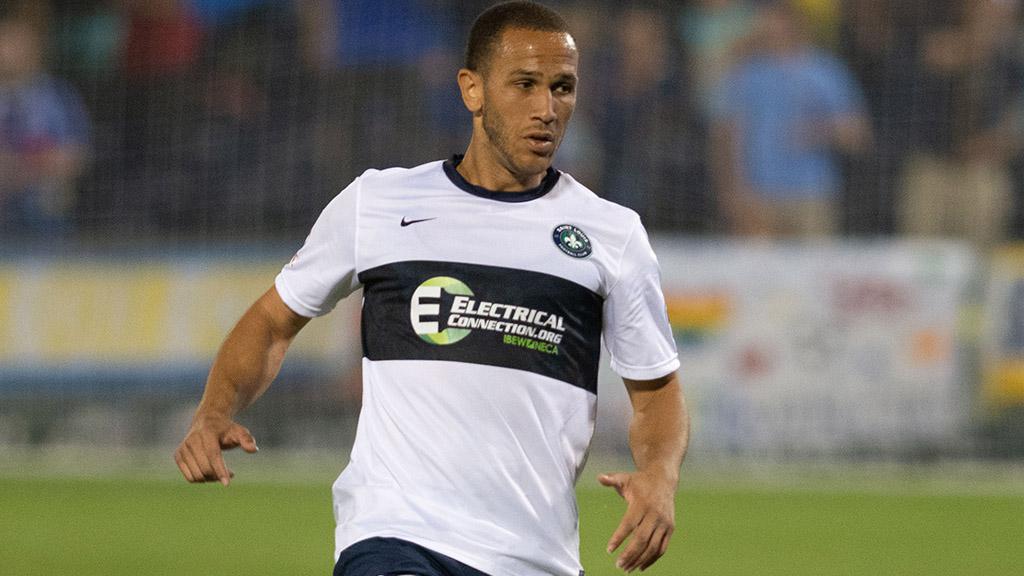 Tony Walls has made 98 appearances in the USL Championship during his career as he joins Pittsburgh Riverhounds SC for the 2020 season. | Photo courtesy David Calvert / Reno 1868 FC

PITTSBURGH – Pittsburgh Riverhounds SC announced on Wednesday it had signed defender/midfielder Tony Walls to a one-year contract with a club option for the 2021 season, pending league and federation approval.

Walls captained current Hounds Head Coach Bob Lilley’s 2015 Rochester Rhinos title-winning team, which lost just one game over the course of the entire season (17-1-10). He most recently suited up for Chattanooga Red Wolves SC of USL League One in 2019, playing 24 matches during his lone season for the club.

“Tony is a very versatile player who will bring quality experience and toughness to our roster,” said Lilley. “He’s a player that competes well and knows how to win."

Over the course of his three-season stint (2014-16) with the Rhinos, Walls played in 58 games and added six goals and three assists. During the Rhinos’ 2015 championship season, he was named All-League First Team as a midfielder. After his career in Rochester, Walls competed for Saint Louis FC for two seasons (2017-18) and helped the club to its first-ever playoff appearance in 2018.

During his career at the USL Championship level, Walls has totaled 98 appearances, eight goals and three assists.

“Santiago brings both international experience, having represented his country at the U-20 level, and meaningful playing experience in the top league of Uruguay,” said SAFC Head Coach Alen Marcina. “As a tenacious ball-winner and relentless worker, Santiago fits our style of play. We are excited to have him as part of the SAFC family.”

Viera spent the 2019 season on loan to Club Atlético Cerro in the Uruguayan First Division where he made 29 appearances, compiling 2,229 minutes and scoring two goals. The 21-year-old has spent the rest of his professional career with Liverpool Montevideo, appearing in more than 30 matches with the club since 2015, including competing in the CONBEMOL Copa Sudamericana. To date, Viera has amassed more than 4,200 professional minutes in the Liga Profesional de Primera Division.

“I’m proud to sign with San Antonio FC,” said Viera. “It means a lot to me that a club like this can count on me to be part of the team. I have no doubt that this will be a great season for all of us and I hope to help the team accomplish all of our collective objectives.”

A local standout, Diaz made five appearances for Locomotive FC in his rookie season, including starting in a key road draw against Reno 1868 FC as the club earned a place in the 2019 USL Championship Playoffs.

“Memo worked extremely hard last season to be an important part of the group,” said El Paso Head Coach Mark Lowry. “His effort and desire to improve made it an easy decision for me to bring him back. He is a popular member of the squad and deserves a second year. I’m excited to see him grow again.”

Makinde joined El Paso in early July by way of trade with FC Tulsa and made eight appearances for the side acting as defensive cover throughout the regular season and playoffs. The 27-year-old has made more than 60 professional appearances over his career, with Lowry looking to get more from the English defender in 2020.

“Moses is a player who is very interesting,” said Lowry. “He possesses so many good attributes, but I don’t think he has ever been in an environment that can push him, take him past his comfort zone and really challenge him to see how good he can really be. We are going to do that and I’m excited to see how that journey develops.”

T2 MAKES FOUR ADDITIONS: The Portland Timbers 2 announced the return of forwards Gio Calixtro and Ryan Sierakowski and the arrival of midfielders Marcus Epps and Ken Krolicki for the 2020 USL Championship season on Wednesday.

In his first season as a professional in 2019, Sierakowski ranked second on T2 with eight goals and added two assists in 32 appearances in USL Championship play. The Barrington, Ill., native was drafted by the Portland Timbers in the first round (No. 23 overall) of the 2019 MLS SuperDraft from Michigan State University (2015-18).

Calixtro tallied eight goals and two assists in 41 appearances (21 starts) the past three seasons for T2 (2017-19) as a member of the Portland Timbers Academy. The 19-year-old Oregon native is the second-youngest player in team history to make his debut for the club, logging seven minutes off the bench as a 16-year-old. In 2019, Calixtro made 26 appearances (17 starts), ranking fifth on the team with six goals scored while adding two assists.

Krolicki played the previous two MLS campaigns with the Montreal Impact (2018-19), after being selected with the 53rd overall pick in the 2018 MLS SuperDraft. In two seasons with the Impact, Krolicki has appeared in 40 contests across all competitions and last season helped the Impact win the 2019 Canadian Championship making four appearances in the competition.