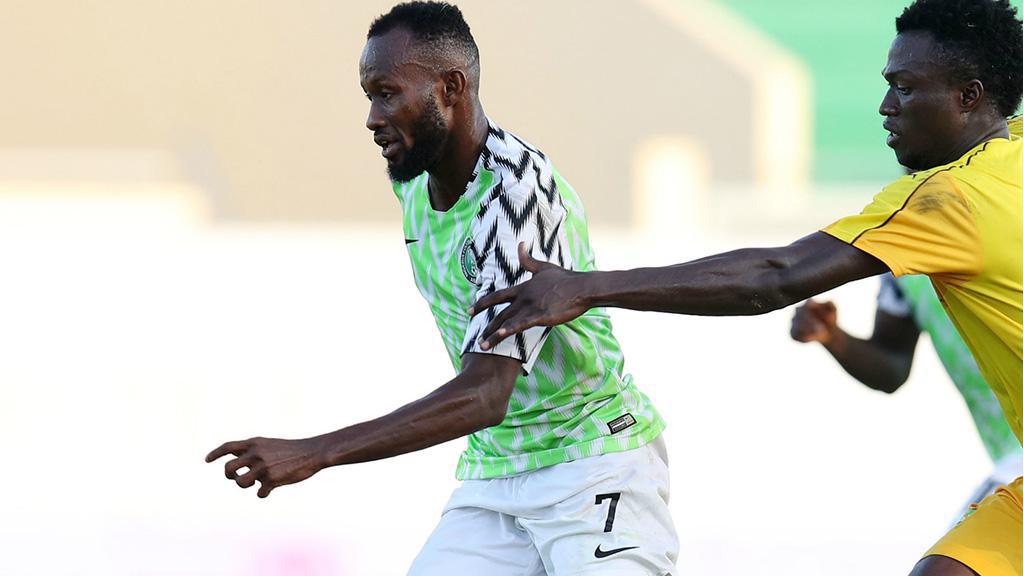 Nigerian forward Mfon Udoh has scored one goal in three appearances for the Super Eagles in his career.

TULSA, Okla. – Two more players with Nigerian national team experience were announced as the newest members of FC Tulsa on Monday afternoon as the club announced it had signed forward Mfon Udoh and defender Solomon Kwambe to its 2020 roster, pending league and federation approval. The duo joins Raphael Ayagwa as the only three active players in the USL Championship with Nigerian national team experience.

A 27-year-old forward, Udoh brings an impressive goalscoring pedigree from the Nigerian Professional Football League (NPFL). Udoh is the only player in league history to score more than 20 goals in a season and his single-season record of 23, set in 2014, still stands. In 2019, Udoh became the only player to top the NPFL scoring charts in two different seasons when he scored 10 goals to co-lead the league.

That potential translated for Kwambe into 18 appearances for Nigeria on the international stage including caps in 2014 FIFA World Cup qualifying and 2015 Africa Cup of Nations qualifying.

“Zach is a physically dominant central defender who is excellent in the air,” said 901 FC Head Coach Tim Mulqueen. “He is very good at starting the attack from the back with great passing and decision-making ability.”

Carroll spent the last two seasons with 1868 FC where he started 50 matches, recorded over 4,500 minutes, scored three goals and maintained a 70 percent success rate on aerial duels as 1868 FC reached the USL Championship Playoffs both seasons.

MONARCHS ADD VEGA TO MIDFIELD: Real Monarchs SLC announced on Monday it had signed midfielder Devin Vega, pending league and federation approval. The terms of his signing have not been disclosed.

“Devin is a player that has had success at the Championship and League One level,” said RSL Technical Director Dan Egner. “At only 21 years old, we expect him to come in, continue to develop and be a significant contributor for the Monarchs. He is exactly the type of player we look to bring into the Monarchs, and we couldn’t be happier to welcome him to Utah.”

Vega joins the defending USL Championship title-holders with three years of experience in USL Championship. The 21-year-old turned professional with San Antonio FC in the 2017 season and recorded three goals across 14 appearances, after playing his youth career with FC Dallas from 2015-17. The attacking midfielder signed with Phoenix Rising FC ahead of the 2018 season, where he tallied two goals in 12 appearances before making nine appearances and three goals while on loan with USL League One side FC Tucson in 2019.

This past November, Vega earned international experience with the Puerto Rico Men’s National team where he contributed a goal in his national team debut to help the side to a 3-0 win over Anguilla in CONCACAF Nations League C.