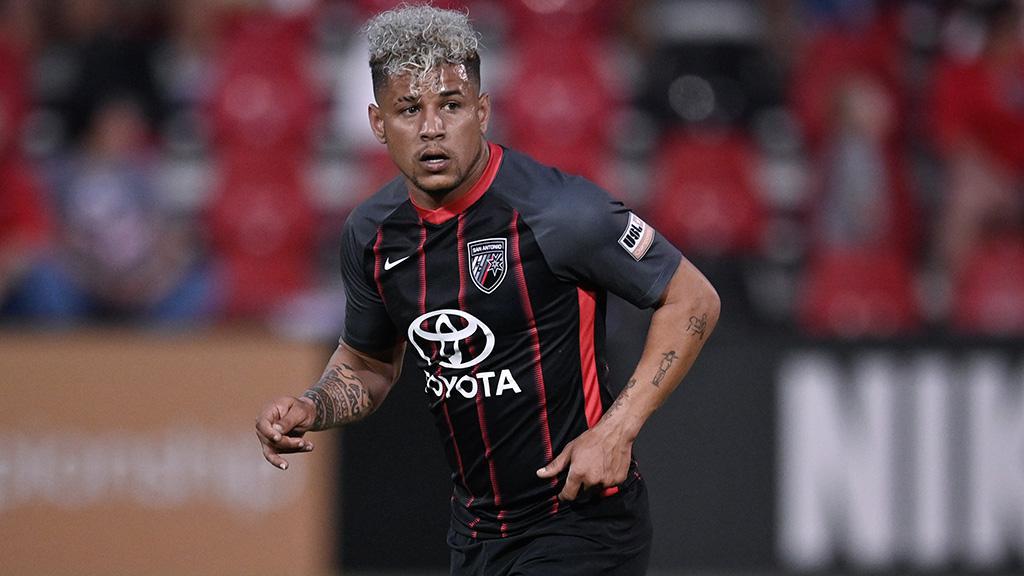 Cuban forward Frank Lopez has scored 27 goals in 56 appearances in the USL Championship as he arrives with OKC Energy FC for the 2020 season. | Photo courtesy Darren Abate / San Antonio FC

OKLAHOMA CITY – OKC Energy FC announced on Monday it had acquired forward Frank Lopez from the LA Galaxy II, pending league and federation approval. The terms of the transfer will remain undisclosed.

“He’s a known commodity, and he’s a proven goal scorer in this league,” said Energy FC Head Coach John Pascarella. “He’s feisty, persistent and can be very demanding of his teammates, but those are great qualities in my opinion.”

Lopez scored eight goals in 14 appearances while on loan at San Antonio FC in the second half of 2019, tied for most on the team. After signing for LA Galaxy II in 2018, the striker found the back of the net 19 times in 42 appearances and boasts a scoring rate of a goal every 129.3 minutes during his time in the Championship.

Prior to his move to the Galaxy II, Lopez played for his hometown academy FC Cienfuegos in Cuba. He defected to the United States during the 2015 Concacaf Men’s Olympic Qualifying Tournament where he was part of the Cuba U-23 Men’s National team, and subsequently joined the Miami Soccer Academy in 2015.

GREENE RE-SIGNS WITH SAFC: One of the USL Championship’s regular season Ironmen in 2019, Kai Greene, has re-signed with San Antonio FC for the 2020 USL Championship season, pending league and federation approval, the team announced on Monday. Per club policy, terms of the deal were not disclosed.

Greene played every minute of all 34 league matches with San Antonio last season, setting the club’s single-season minutes record with 3,060 after surpassing the previous record of 2,870 set by Darnell King in 2018. In addition, Greene’s 64 tackles won ranked first in the Western Conference and second in the USL Championship in 2019, marking the second time Greene has finished second in the league in tackles won (also, 2017 – 73 tackles).

The 25-year-old also led SAFC in interceptions (48), tackles (103), aerial duels (156) and aerial duels won (102). The defender made the second-most passes on the club last season (1,726) while recording an 83.3 percent passing accuracy. Greene added one assist and 14 key passes from his defensive position.

“I’m glad to be back in San Antonio,” said Greene. “We have some unfinished business to take care of and, we want to make the playoffs and fight for a championship. I’m thankful Alen believes in and trusts in me and I can’t wait to get the season started.”

Greene joined SAFC prior to the 2019 season after previously playing for rivals RGV FC from 2016-18. Overall in his professional career, Greene has played in 102 USL Championship matches, tallying 8,431 minutes of action.

“Daniel is a versatile attacking player who has had a great college career,” said ATL UTD 2 Head Coach Stephen Glass. “We are delighted he has chosen to join our club as the first step in his professional career and further develop his talents.”

Steedman, 19, was born in Glasgow, Scotland and moved to Charlotte, North Carolina where he played for the Charlotte Soccer Academy. While competing for CSA, Steedman was a USL Academy signing for the Charlotte Independence and made a pair of regular season appearances in the USL Championship in 2018.

He then attended the University of Virginia where he played two years from 2018-19 and totaled five goals and seven assists. Steedman was named to the ACC All-Freshman Team in 2018 after appearing in 15 games and scoring two goals. Last fall, Steedman scored three goals and finished second on the team in assists with seven.

The sophomore was vital to Virginia’s run through the 2019 NCAA Division I Men’s Soccer Tournament as he recorded three assists and scored one goal in five games. He assisted the game-winning goal in a 2-1 win over Wake Forest in the Semifinals to send the Cavaliers to College Cup. Facing Georgetown in the Final, Steedman scored in the 58th minute to tie the match at 2-2. The game finished in a 3-3 draw and advanced to penalties where Steedman converted his penalty kick.