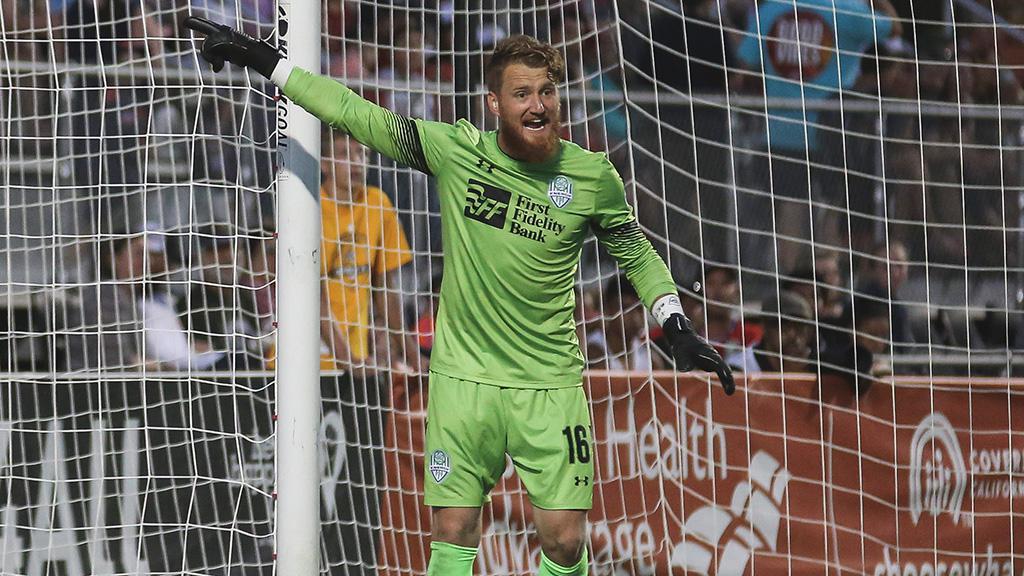 TULSA, Okla. – Another familiar face is returning to FC Tulsa, which announced on Friday the signing of goalkeeper Bryan Byars to the 2020 roster, pending league and federation approval. Byars was a member of the 2017 Tulsa Roughnecks FC team that made the USL Championship Playoffs and will return to Tulsa following a two-season stint with rivals OKC Energy FC.

“The addition of Bryan Byars is a major positive for FC Tulsa,” said Tulsa Head Coach Michael Nsien. “Bryan is extremely consistent with his hands and feet, and you always know what you’re going to get with him. Bryan is a competitor and has a winning mentality. We are thrilled to bring him back to Tulsa. Bryan also adds to the locker room as an excellent character, and it’s important to have personalities such as his in the team.”

Byars has made 17 USL Championship appearances between the sticks in the last three seasons, with eight of those coming Tulsa in 2017. He made two appearances last year with Energy FC, both starts, as he served the 2019 season as the Energy’s backup keeper. The 28-year-old is an Oklahoman through and through, growing up in the state and playing his entire professional career in either Oklahoma City or Tulsa.

ENERGY FC MAKES TWO ADDITIONS: OKC Energy FC announced on Friday the signing of midfielder Brad Dunwell and goalkeeper Kyle Ihn as it continues to build its squad for the 2020 USL Championship season.

Dunwell, a 22-year-old defensive midfielder from Grand Rapids, Mich., made seven appearances in the Championship for Rio Grande Valley FC in 2019, completing 85.9 percent of his passes in league play. During his four-year playing career at Wake Forest University, Dunwell also made 37 appearances for USL League Two side the Flint City Bucks before being selected 56th overall in the 2019 MLS SuperDraft by Houston Dynamo. He then signed with the Toros for his first professional season.

“Brad is a kid I scouted when I was with Minnesota,” said Energy FC Head Coach John Pascarella. “He’s a versatile central midfielder and is most comfortable as a deep-lying playmaker. He’s very, very good on the ball, and he has a bright future ahead of him.”

Ihn spent the 2019 season with Lansing Ignite FC of USL League One, and also brings prior experience from the Championship after competing with Reno 1868 FC in the 2018 season. A former player for Pascarella in USL League Two for the Des Moines Menace, he is the third goalkeeper signed to Energy FC’s squad this offseason joining Cody Laurendi and CJ Cochran.

“Kyle is a goalkeeper I’ve known for quite a while,” said Pascarella. “He played for me in Des Moines, and I brought him in to preseason at Minnesota. He’s a guy I think will be a longtime pro. He has great size, good passing ability out of the back, is good with his hands and is a very quiet, humble kid.”

ARCHER, DALEY BACK WITH BATTERY: The Charleston Battery have announced the return of two more key players from the 2019 season in defender Leland Archer and forward Nicque Daley for the new season.

Archer has made 31 appearances over the past two seasons, making 133 clearances and 44 interceptions while logging over 2,500 minutes since his arrival with the Black and Yellow. The past year saw him also earn his first call-up to the Trinidad & Tobago National Team as he was selected for the 2019 Concacaf Gold Cup.

Daley, meanwhile, saw action in 17 USL Championship matches in his first season with the Battery including five starts. The Jamaican U-23 international also made his impact felt in the Lamar Hunt U.S. Open Cup, where he scored a pivotal goal against Nashville SC in the Third Round, sending the teams to a penalty shootout where the Battery would eliminate their then-USL Championship rivals.

“I'm excited to join the team and I'm looking forward to play for the Switchbacks in 2020,” said Lewis. "Alan Koch is a coach that I had and know for quite some time from my time back in Vancouver in the MLS. I know that the Switchbacks are an ambitious team and I'm coming with my experience and knowledge to try and help the team push into the playoffs and push for a title in 2020.”

Lewis is a creative attacking midfielder with USL Championship experience. He was a standout for the Jamaican U-17 and U-20 youth teams before playing for Portmore United in Jamaica. Lewis was drafted 7th overall in the 2014 MLS SuperDraft by Vancouver Whitecaps FC (MLS) before being loaned out to the Charleston Battery (2014) and Whitecaps FC 2 (2015). The Jamaican native played for Portland Timbers 2 from 2016 to 2018 before returning to Portmore United for the 2019 season. In his professional career, Lewis has eight goals in 107 appearances.

“Having worked with Andre a few years ago in MLS with the Vancouver Whitecaps, it is a pleasure to get to work with him again,” said Switchbacks Head Coach Alan Koch. “He is a talented player who has all the athletic and technical skills to be successful in our midfield. His range of passing is excellent, and his infectious personality is a major energy driver for those around him. I don't think he has reached his capacity yet in his career, and we will push him every day to reach higher performance levels.”