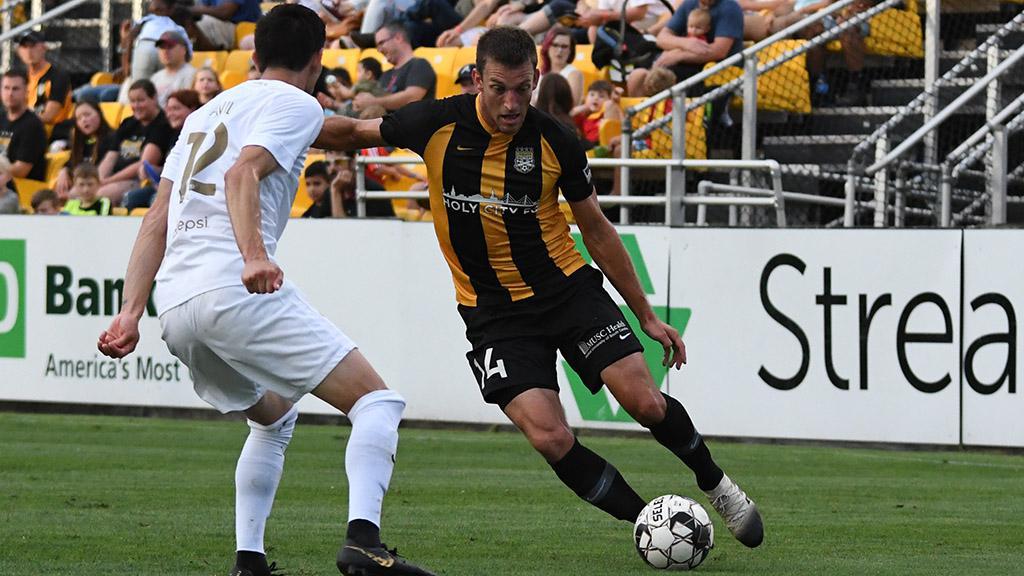 Charleston's Jarad van Schaik made 34 appearances in the 2019 season for the club and was named the club's 2019 Nigel Cooper Most Valuable Player. | Photo courtesy Charleston Battery

CHARLESTON, S.C. – The Charleston Battery revealed their first returning player of the offseason on Friday with the announcement that Jarad van Schaik – the club’s 2019 Nigel Cooper Most Valuable Player – will return for the 2020 USL Championship season.

A veteran leader on and off the pitch, Van Schaik enters his sixth season with the Battery, having returned to the club for a second stint at the 2017 season.

Van Schaik showcased his versatility in 2019 filling in at a number of different positions including left midfield, left back, and center back, where he finished out the regular season and helped the Battery reach the 2019 USL Championship Playoffs.

NCFC RE-SIGNS TAMBAKIS: North Carolina FC announced on Friday it had signed Alex Tambakis to a new contract for the 2020 season. The transaction is pending league and federation approval, and no further details were disclosed, per club policy.

Since joining NCFC in 2018, the Greek goalkeeper has recorded 15 clean sheets, the third-most in team history, and is coming off a 2019 campaign that included eight shutouts and a 75.21 save percentage, the highest among the top ten goalkeepers in saves in the USL Championship.

“One of our top priorities was to secure Alex for another season with us,” NCFC head coach Dave Sarachan said. “I strongly believe he’s as good as any goalkeeper in the USL Championship. He was a mainstay for us, making important saves and continuing to grow as a player. When you get a guy like Alex in goal for you, it’s a great starting point as we continue to grow our roster.”

“We are excited by the addition of Jesus Enriquez to the SAFC family,” said SAFC Head Coach Alen Marcina. “Jesus possesses game-changing qualities in the attack and is committed to the off the ball tasks required in our game model. With our club commitment to develop and progress players, we are excited to see Jesus evolve as a player and professional in 2020.”

Enriquez joins the Alamo City club after spending the previous two seasons with San Antonio’s Championship rivals Rio Grande Valley FC. From 2018-19 with the Toros, Enriquez appeared in 61 league matches, making 49 starts while recording 4,625 minutes played, 10 goals, nine assists and 85 key passes. Enriquez recorded one key pass per 54 minutes played over the course of his two seasons in RGV, and the 22-year-old led the Toros in both goals (six) and assists (six) in the 2018 season.