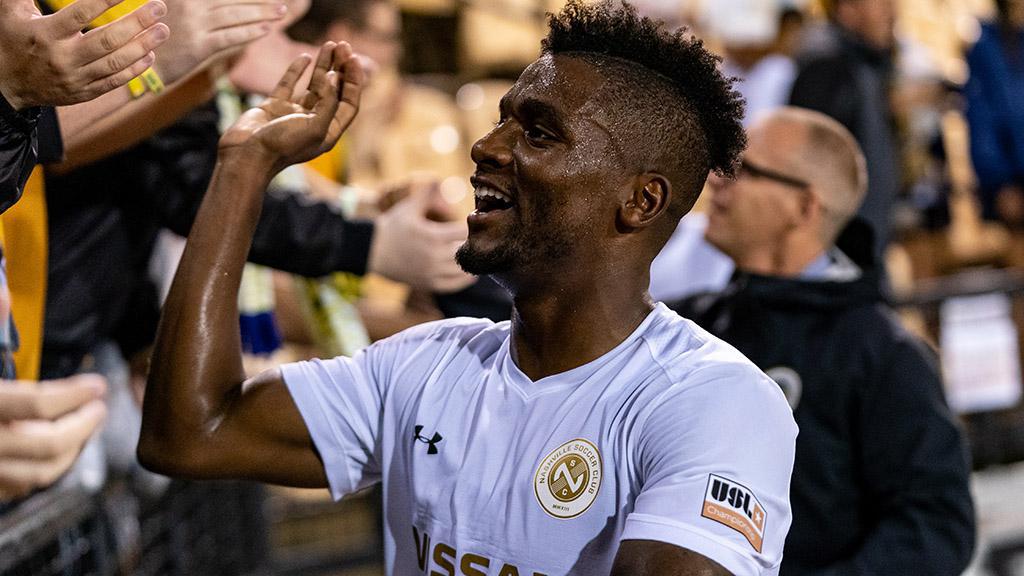 FC Tulsa signing Bradley Bourgeois has reached the USL Championship Playoffs each of the past three seasons, including in 2017 in Tulsa. | Photo courtesy John Wilkinson III / Nashville SC

TULSA, Okla. – A familiar face will be in FC Tulsa’s colors for the 2020 USL Championship season as the club announced on Wednesday it had signed defender Bradley Bourgeois to a multiyear contract, pending league and federation approval. Bourgeois returns to Tulsa after spending the last two seasons with USL Championship club Nashville SC where he was a key piece of one of the league’s top defenses.

“It’s very exciting for us to have Bradley back in Tulsa wearing the FC Tulsa uniform,” said FC Tulsa Head Coach Michael Nsien. “Working with Bradley previously, he has the intangibles needed to create a winning environment and has the potential to lead and shape the culture that will help our team reach its objectives. Bradley has unquestionable character and a fighting spirit. He is a ball winner, and he’s eager to win all of his duels. I’m certain Bradley is as motivated as any player to make this next season his best as well as Tulsa’s best.”

Bourgeois made a name for himself in Tulsa as a standout defender at Tulsa University, twice earning All-American Athletic Conference First Team selection in 2014 and 2015. The 25-year-old was signed as a Homegrown Player by Major League Soccer’s Houston Dynamo for the 2016 season, and the following year continued his professional career in Tulsa where he made 30 appearances to lead the Roughnecks to the USL Championship Playoffs for the first time.

The breakout season in Tulsa offered Bourgeois the chance to join USL Championship expansion club Nashville SC, where he made 42 appearances as a major cog in NSC’s second-ranked defense in 2018 and top-ranked defense in 2019. Playing on the backline, Bourgeois scored three goals for Nashville, including a dramatic extra-time equalizer in Nashville’s playoff match in 2018 against FC Cincinnati to send the match to a penalty shootout. He now returns to Tulsa looking to make a significant impact as the club enters its new era.

A native of Sherbrooke, Quebec, Gagnon-Laparé came through the Montreal Impact youth system before signing a Homegrown Player contract with the club in 2014. He made 29 appearances and scored one goal for FC Montreal in the USL Championship while also making six appearances for the MLS side during the 2014-16 seasons.

Gagnon-Laparé then competed in France for AS Vitre, where he made 37 appearances and scored two goals over the 2016-17 seasons before returning to Canada to sign with the Championship’s Ottawa Fury FC. He played 2,428 minutes over 33 appearances with 21 key passes during the 2019 season as Fury FC made the playoffs. Gagnon-Laparé has also appeared in five matches for the Canadian Men’s National Team, making his debut in August 2013 as an eighteen-year-old.

“Jérémy is someone I would describe as a player’s player. He’s the type of guy that is valued very highly by his teammates,” said STLFC Head Coach Anthony Pulis. “He has excellent ball-retention qualities, is very aggressive and has a good football brain. We see him playing as a left-back in our system but is certainly capable of playing in a couple of other positions too, so he adds great value to our squad.”

“I’m super excited to join STLFC,” said Gagnon-Laparé. “I had a discussion with Anthony a couple weeks ago that really got me interested. I felt like he had a clear vision and he wanted me to be part of it. I can’t wait to get to St. Louis and start working with this new group as well as play in front of the fans!”