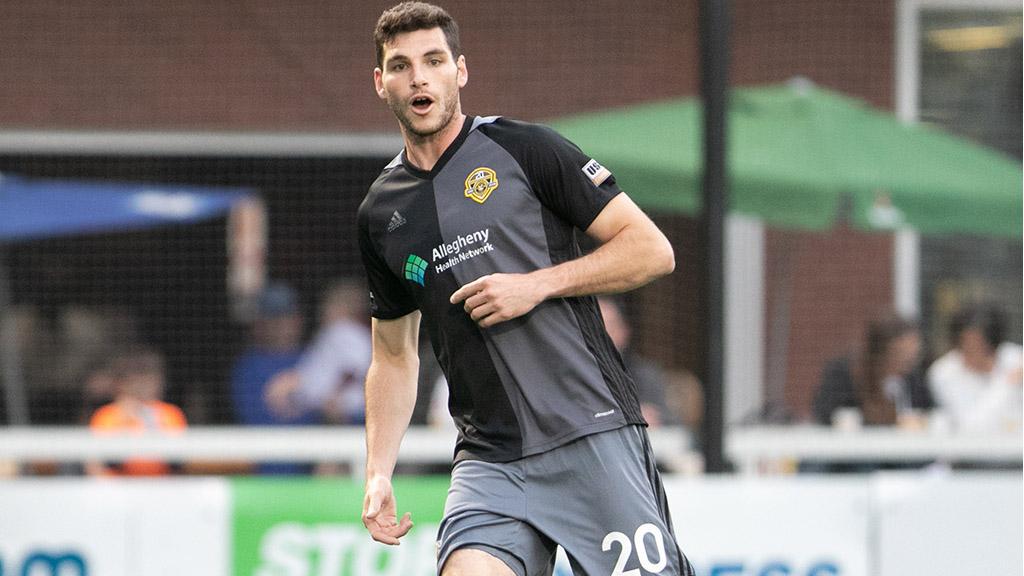 2019 USL Championship Defender of the Year Joe Greenspan will have high expectations placed on him as he arrives at San Diego Loyal SC, but is more than capable of living up to them. | Photo courtesy Chris Cowger / Pittsburgh Riverhounds SC

He may not be the first signing in San Diego Loyal SC’s history, but in terms of statements of intent today’s announcement that reigning USL Championship Defender of the Year Joe Greenspan has signed on to join Landon Donovan’s squad in Southern California is a major one.

The 6-foot-5 former Navy standout is now set to become a central pillar around which Donovan, Loyal SC’s EVP of Soccer Operations and Manager, can build his initial roster as it joins the Championship for the 2020 season.

The signing also brings echoes from the last time Warren Smith launched a team in the USL Championship, when Sacramento Republic FC entered with designs on being a serious player from the opening kickoff next spring.

Back then in California’s capital it was Rodrigo Lopez that was brought aboard as Sacramento’s talisman. All he did was become an instant Republic FC legend, earning All-League First Team honors in the regular season, scoring a hat trick in the Miracle at Bonney against the LA Galaxy II in the Semifinals of the postseason, and then taking MVP honors in the 2014 USL Championship Final.

It's a lot to ask of Greenspan to achieve that status as quickly in San Diego as Lopez did in Sacramento, but in terms of being a key foundational piece, Loyal SC has certainly got its man.

And while the Championship has grown a lot in the years since – Republic FC remains the last expansion side to lift the title in its inaugural season – contention in an inaugural season isn’t as unrealistic as it might seem. We only need to look to this past season to realize immediate contention isn’t unattainable with El Paso Locomotive FC’s run to the Western Conference Final an example of the sights San Diego can set for itself.

There will be plenty more signings to come as Loyal SC builds its squad with that goal in mind, but after welcoming native San Diegan Sal Zizzo as the club’s first signing, Greenspan’s accomplishments over the past two seasons with Pittsburgh Riverhounds SC made him a logical choice to be one of the next on the list. A back-to-back selection to the Championship’s All-League First Team and one of the best defensive presences for a stellar squad in the Steel City, the 27-year-old has a resume that stacks up with the best players in the league.

Since the start of the 2018 season, Greenspan ranks second in clearances with 334, while he ranks fourth in aerials won (263) at a success rate of 74.9 percent. Want to try and get around him? There have only been 23 times in 58 appearances that an opponent has dribbled past Greenspan according to Opta, while his average of a yellow card every 5.8 games and less than a foul conceded per game (53) shows off the positional sense he brings.

Beyond that are the intangible leadership skills he brings, which made him an essential piece for the Hounds as they finished on top of the Eastern Conference this past season.

“He trains hard every day,” Pittsburgh Head Coach Bob Lilley told The Athletic’s Jeff Rueter earlier this year. “He’s got a lot of good qualities, but I think the biggest one for us is how organized he is back there. He has a good understanding of what we want to do.

“I’ve put a lot on his plate; I think the system that I use is a little bit more detailed than some teams. It’s a little bit more zonal than a lot of defenses. What I’m asking him to do, in certain situations, a lot of times different than what most defenders have been taught.”

That’s the description of a player that should be the foundation stone of a franchise. Like Lopez before him in Sacramento, Greenspan will be ready to carry the load in a city that will embrace him.

As a former Midshipman, how does the nickname “The USS San Diego” sound?