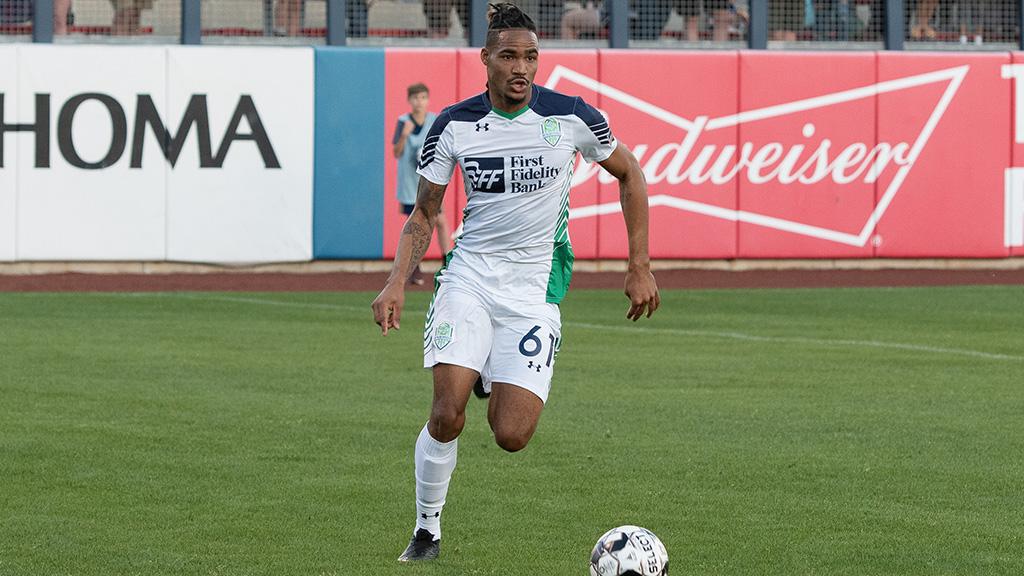 OKLAHOMA CITY – OKC Energy FC announced on Monday that Trinidad and Tobago international defender Alvin Jones has been acquired by Real Salt Lake of Major League Soccer for a transfer fee. Terms of the agreement have not been disclosed.

“We’re always looking for younger players with higher aspirations,” said Energy FC General Manager Jason Hawkins. “We knew Alvin fit some of that mold when we brought him in, and we’re excited for the opportunity for him to progress in his career while still being able to serve as a pathway for players who are on an upward trajectory. We’d like to thank Alvin for his contributions to the club and wish him all the best in his career.”

Jones signed with Energy FC on April 9, 2019 and made 22 appearances, all of which were starts, as he recorded one goal and two assists for the clubs. In addition, the 25-year-old made nine appearances for Trinidad and Tobago during 2019, including being selected for the 2019 Concacaf Gold Cup.

Fall spent the 2019 season with Ottawa Fury FC where he made 30 appearances and co-led the team with 10 goals as it advanced to the USL Championship Playoffs. A native of Frankfurt, Germany, Fall made his USL Championship debut in 2016 after signing for the Rochester Rhinos and went on to make 53 appearances and score 13 goals before his first stint with Saint Louis FC. Fall rejoins the club after making 22 appearances with five goals and two assists during the 2018 campaign.

“We’re delighted to welcome Wal back to the club,” said STLFC Head Coach Anthony Pulis. “He had a huge impact for us in 2018 and we look forward to more of the same in 2020. His composure in possession, technical ability and creativity will add a different dimension to us this year. He’s a winner, a fierce competitor and I’m really looking forward to working with him again.”

HEDRICK RE-UPS WITH TULSA: FC Tulsa announced on Monday it had re-signed veteran leader Cyprian Hedrick for the 2020 USL Championship season, pending league and federation approval. Hedrick is ranked 12th among active players in regular season appearances (166) and seventh among active players in minutes played (13,854) as he enters his eighth season in the Championship.

“With any team, it is important that you have players that understand your principles," said FC Tulsa Head Coach Michael Nsien. “Cyprian not only understands my expectations of the team and the players, he is approaching 170 games in this league, and he knows how to compete at this level successfully. We expect Cyprian to help shape a winning culture for this team, while he continues to perform at a high level. On day one, he will be a major part of setting the tone for this season.”

The Cameroonian was a rock at the center back position last season for FC Tulsa, playing every minute in 33 of the 34 matches in 2019. Hedrick missed just a single match due to yellow card accumulation. As a defender, Hedrick contributed one goal and one assist last season while recording 176 clearances, the second-most of any player in the USL Championship.

“I’m excited to be a small part of the big changes happening with soccer here in Tulsa,” said Hedrick. “I can’t wait to get to work with my teammates to give this city a team they want to get behind and support.”

HARTFORD INKS BRAZILIAN DEFENDER: Hartford Athletic announced it had signed Gabriel Torres for the 2020 USL Championship season, pending league and federation approval. The native of Salvador, Brazil joins Alex Davey and Sam Strong on the Hartford back line and is the 10th player signed for the club’s second season.

Torres comes to Hartford from Chattanooga Football Club. Torres split his time in the field between defense and midfield, scoring a goal and recording two assists during the season. Prior to Chattanooga, he played for the University of the District of Columbia. While in school, the 23-year-old had a stellar 2017 campaign, amassing 52 points on 20 goals and 12 assists, which earned him NCAA DII First team All American honors, CCA’s East Region Player of the Year, and East Coast Conference Offensive Player of the year.

In 2018, Gabriel demonstrated his versatility playing as a defensive midfielder for USL League Two club The Villages SC, where he played all 17 games and was part of a defense that recorded seven shutouts and never allowed more than one goal per match.